Leemor Joshua-Tor got her first introduction to chemistry in 7th grade. The Weizmann Institute of Science had created an introductory chemistry class for the local middle school in Rehovot, Israel, where Joshua-Tor was a student. The class was memorable not only for the science, but also because the box she used to store the cards she’d made representing the elements on the periodic table was one of her mother’s perfume boxes. “Every time I opened the box it had this nice smell, so I think my brain associated that smell with science,” says Joshua-Tor, a structural biologist and professor at Cold Spring Harbor Laboratory. “Chemistry was good for me.” 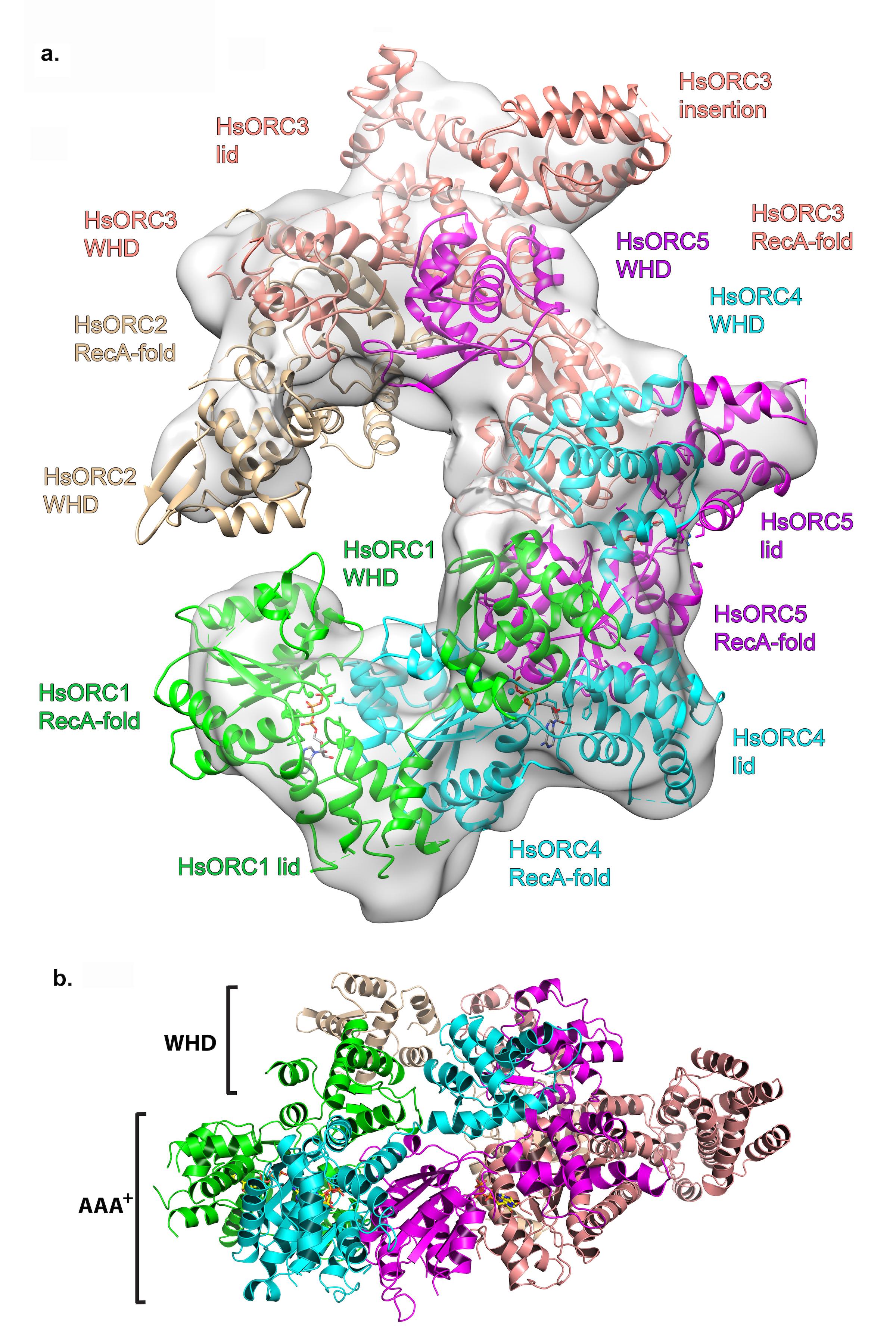 Structure of the human Origin Recognition Complex (HsORC) determined by X-ray crystallography and cryoEM. a. Ribbon diagram of HsORC modeled into cryo-EM density. The ORC motor module components are colored in green for ORC1, cyan for ORC4 and purple for ORC5. ORC2 is shown in wheat and ORC3 is shown in salmon. ATP is shown in stick. The various domains for each subunit are labeled, where the RecA-fold domain and the Lid domain together constitute the AAA+ domain. b. Side view with the WHD layer on top and the AAA+ layer on the bottom. The ORC3 insertion can be seen extending from the particle on the right.

Joshua-Tor made her mark on structural biology with the solution of Slicer, an Argonaute protein that performs the enzymatic slicing of messenger RNA to carry out the process of RNA interference (RNAi). Her lab also investigates DNA replication and recently solved the structure of the Origin Recognition Complex (ORC), which is involved in the earliest steps of DNA replication. She also has a longstanding interest in the motor proteins that participate in DNA replication. “The story behind nucleic acids, the history of the science and the beauty of molecular biology, have always fascinated me,” she says. “I’m drawn to understanding how these molecules get manipulated.”

After attending Tel Aviv University as an undergraduate student of chemistry, Joshua-Tor attended the Weizmann Institute for graduate school. She wanted to connect chemistry to biology in some concrete way, so she’d planned to join a biochemistry lab focused synthesizing retinal (vitamin A) as a way to understand rhodopsin proteins.

But along the way, and just for fun, she did a rotation in a structural biology lab doing x-ray crystallography. “I really loved it, so I decided to keep doing it,” she says. “It was completely accidental.”

Her doctoral advisor, crystallographer Joel Sussman, introduced her to the history of the double helix structure and to it’s aesthetics, with its pitch-to-width reflecting the Golden Ratio. “The lab immersed me at this completely different level by introducing me to the beauty and the history of molecular biology,” she says.

The real pull, however, was the precision and physicality of structural biology. For Joshua-Tor, biology had always been intriguing, but a tad too squishy. She’d adopted the term “blobology” to express her frustration with the state of understanding of biological processes, particularly when she started looking at RNAi after joining the Cold Spring Harbor faculty. “We were literally drawing pictures of blobs,” she says. “This blob binds to that blob.”

An interest in nailing down the underlying binding mechanisms led her to the Argonaute protein. It appeared to be involved in the RNA-induced silencing complex (RISC), but the process, she says, “was all blobs.”

She and graduate student Ji-Joon Song took on the challenge of understanding Argonaute’s structure and functions. After several stalled efforts, they abandoned human Argonaute in favor of an archaebacteria form, despite skepticism from colleagues. “We put our heads down and just tried it,” she says.

The final result was gratifying and hard-won, which is true of most discovery science, but perhaps more so for structural biology, especially for students who have never solved a structure before. “It’s such a step function. Until you have your structure, you don’t have anything,” says Joshua-Tor, an HHMI Investigator who was elected into the National Academy of Sciences and the American Academy of Arts and Sciences in 2017.

Her lab is still focused on trying to understand the basic mechanisms of RNAi. Joshua-Tor has also begun investigating a system that regulates the production of let7 microRNAs, which act as a switch in stem cells to regulate proliferation. They also play a role in cancer cells. “There’s a parallel between stem-ness and cancer,” says Joshua-Tor, who’s latest yet unpublished work reveals details about this switch’s different modes of operation.

Work is also proceeding on understanding ORC and the motor proteins involved in DNA replication. To carry out this work, Joshua-Tor has expanded her methods to include cryo-electron microscopy, which allows her to solve large structures at a level of detail not possible in the past. “We’re connecting this continuum of imaging molecules, from looking at atoms with crystallography to looking at larger structures with cryoEM, and also linking that continuum to cell biology,” she says. “It’s an exciting time.”