Soon after starting his lab at Vanderbilt University in 2004, Brandt Eichman attended a DNA repair meeting in Bermuda. When the Keynote speaker mentioned two new glycosylases, enzymes that recognize and repair damaged DNA, Eichman scribbled the names in his notebook: AlkC and AlkD.

Back in Nashville, Eichman, who had studied glycosylases as a post-doc, noticed that the genetic sequences of these glycosylases didn’t look like any others he’d seen. His lab found that the structure of AlkD also looked different. “It didn’t look like any other DNA binding protein in the database,” says Eichman, professor of biological sciences and professor of biochemistry at Vanderbilt.

It took until 2015 for Eichman to figure out how these mysterious glycosylases work. A series of crystallographic snapshots of the enzyme repairing DNA shows that, instead of grabbing on to a DNA base and flipping it into its active site to gain access to the damage, as other glycosylases do, AlkD engages with the DNA without any flipping. AlkD has a large active site that allows it to repair larger DNA lesions than typical glycosylases. “It’s a new paradigm for base excision repair,” says Eichman, who has recently launched an effort to find other exotic glycosylases. 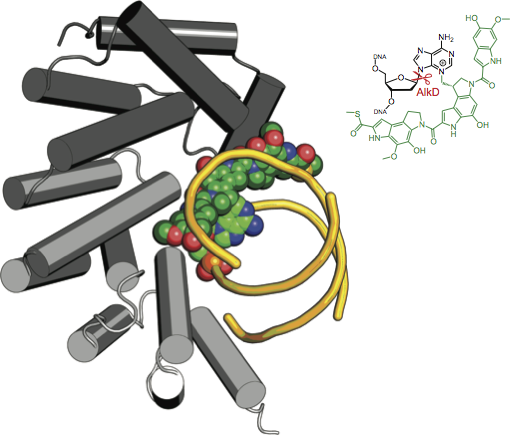 Eichman had originally planned to be a doctor. In college in Mississippi, he enjoyed biochemistry and did some lab work as a synthetic organic chemist, where he was introduced to X-ray crystallography. But his first stop after graduation was Lake Tahoe, California, where he worked in construction. In less than a year, he says, “Chemistry called me back.”

He attended Oregon State University for graduate school and joined the lab of Shing Ho. There he studied Holliday junctions, regions of DNA that have become tangled, turning a two-stranded helix into a frayed, four-stranded knot. Such tangles occur during DNA recombination, but Eichman’s work showed how DNA damaging drugs can cause such tangles.

Eichman used crystallography to explore the influence of the DNA sequence on tangles by trying to trap different DNA sequences in a tangled state. In 1999, he solved the first structures of Holliday junctions. “I learned that DNA is very malleable. DNA is not just the double-helix we’re used to seeing,” says Eichman. “It can really undergo a lot of gymnastics.”

After graduation, Eichman joined the lab of Tom Ellenberger at Harvard Medical School as a post-doc to learn more about DNA repair and how to purify and crystallize proteins. He started out working on a DNA damage tolerance protein called a trans-lesion polymerase. During DNA replication, damaged DNA can cause a roadblock that causes the replication machinery to stall. Trans-lesion polymerases fill in and bypass the damage. “I thought this was the coolest thing ever,” he says.

The project stalled, however, because the proteins were too difficult to purify. As a backup plan, Eichman solved the structure of a glycosylase. When he set up his own lab, he continued to focus on them. “I’d realized there was a lot about these enzymes that we didn’t know,” he says.

While his lab delved into the mysteries of AlkD and AlkC, they also worked on DNA replication. The project gave him a second chance to study the kind of DNA remodeling done by the replication machinery and damage tolerance proteins.

He became interested in another way cells have of repairing DNA on the fly. As the DNA replication process unzips the DNA and becomes blocked by DNA damage, sometimes a motor protein recognizes the stall. It swoops in and pushes the machinery backwards, re-zipping the helix. During re-zipping, the reaction generates a four-stranded knot very much like a Holliday junction. “I love that,” he says. “It’s brought me full circle.”

Alongside efforts to understand more about how these motor proteins work, Eichman is also launching a program to try to discover novel types of glycosylases. Glycosylases like AlkD and AlkC appear to be self-defense tools bacteria use to protect themselves from their own genotoxic weaponry. The discovery of novel glycosylases in bacteria could, in turn, reveal new genotoxic agents with therapeutic value.

The work is in its early stages, but Eichman hopes his collaborations with bioinformaticists will be able to help make the search more systematic. “There’s more biology to understand there,” he says. “Since we’re still discovering new glycosylases in infectious bacteria, that means there’s much more to the story about DNA repair and DNA damage, too.”