Kissing a frog might not spark a fairy tale ending, but learning how frogs survive some of nature’s most deadly poisons has opened a new chapter in the laboratory of Daniel Minor Jr.

The potent neurotoxin saxitoxin, for example, can come from algae blooms in fresh, brackish, and oceanic waters, such as red tides, which seem to be on the increase from climate change and other factors. The toxin accumulates in clams, oysters, and mussels. If people eat contaminated shellfish, they can die within hours. Saxitoxin has a lethal dose a thousand times smaller than deadly amounts of cyanide or sarin. It is the only marine toxin classified as a chemical weapon.

Importantly for Minor’s research, saxitoxin is believed to exert its deadly effects mainly by blocking sodium channels, paralyzing the muscles needed to breathe.

Bullfrogs, on the other hand, aren’t fazed by the toxin, thanks to a protein they make called saxiphilin. In June 2019, Minor’s University of California, San Francisco, team and their Stanford University collaborators revealed the molecular architecture that allows saxiphilin to sop up the toxin.

The paper in Science Advances describes the molecular shapes and dynamics of saxiphilin alone and bound to saxitoxin. It is the first structural characterization of a “molecular sponge” for a toxin, Minor and his co-authors write. Interestingly, the way the toxin binds to saxiphilin to save the frog is similar to the way the toxin blocks ion channels to poison people. 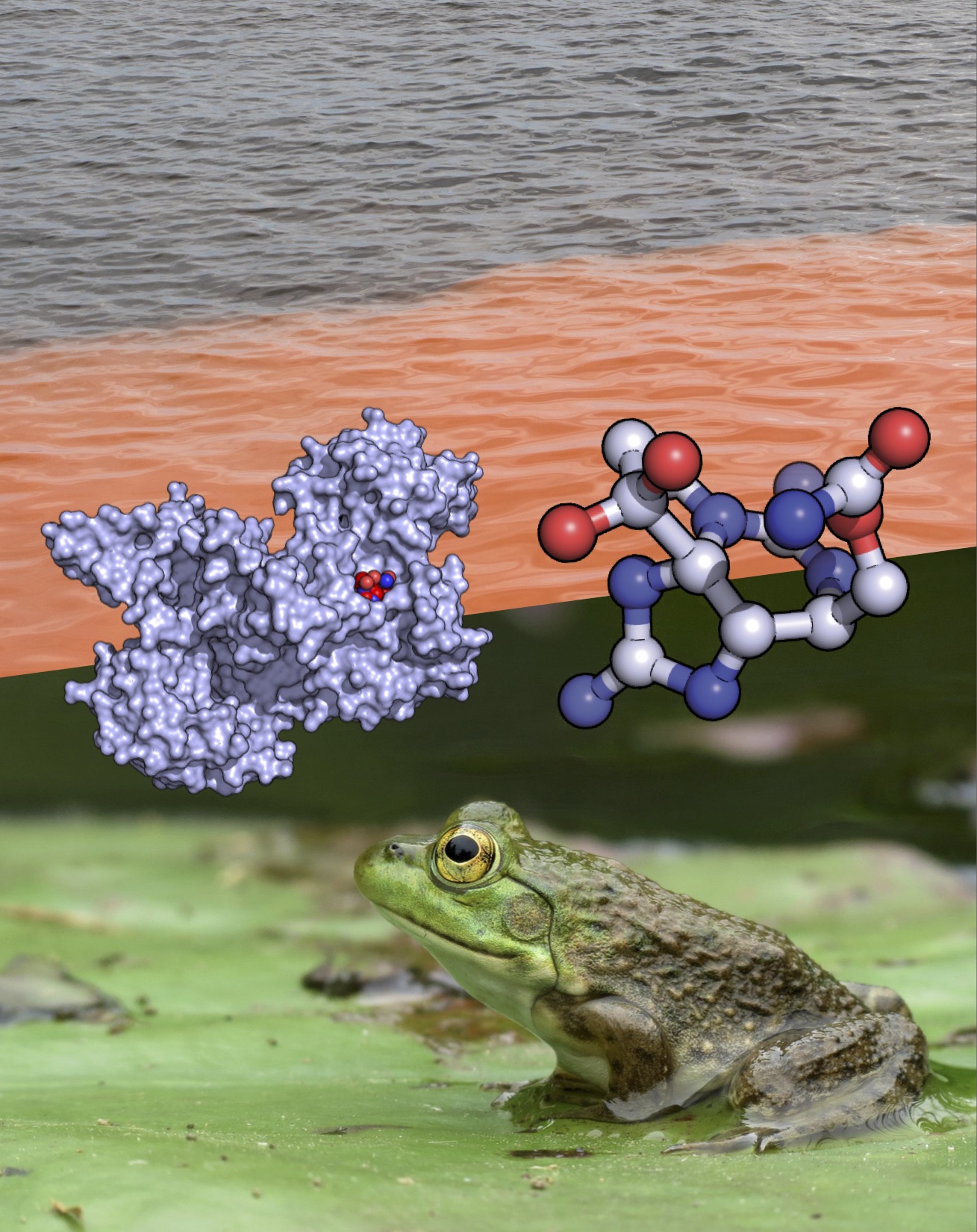 But there is another potentially lifesaving angle that Minor had not considered until recently: Preventing and treating poisoning caused by deadly neurotoxins.

“We’re really excited by this auto-resistance mechanism—how an organism deals with a toxic environment and how it survives,” says Minor. His laboratory collection of frogs, toxins, and questions has since expanded. “Poison dart frogs have all these toxins that target sodium channels. Why don’t the frogs kill themselves?”

Minor wants to understand more about how nature has solved the problem of handling these toxins. He also wants to learn how the defensive frog compounds modify sodium channels and use that information to develop new ways to control channel activities in neurons.

The answers have additional public health and commercial implications. The findings may lead to better sensors to screen for toxins in shellfish destined for human consumption. Further work could lead to an antidote for poisoning by toxins in shellfish or chemical weapons.

Having a lab full of frogs wasn’t exactly something Minor had planned, but in high school he was interested in science. In fact, he secretly set his sights on the storied Laboratory for Molecule Biology (LMB) in Cambridge, UK, after reading Freeman Judson’s Eighth Day of Creation about cracking the DNA code.

“To become a scientist was not a normal thing,” says Minor, about his working-class Northeast Pennsylvania hometown. Good students might strive to become doctors or lawyers. His family supported his decision anyway. “But it’s really weird—when I was growing up, our yard faced the yard of another family, and their son also became a scientist. Both [sets of] parents are not sure what happened on this block.” 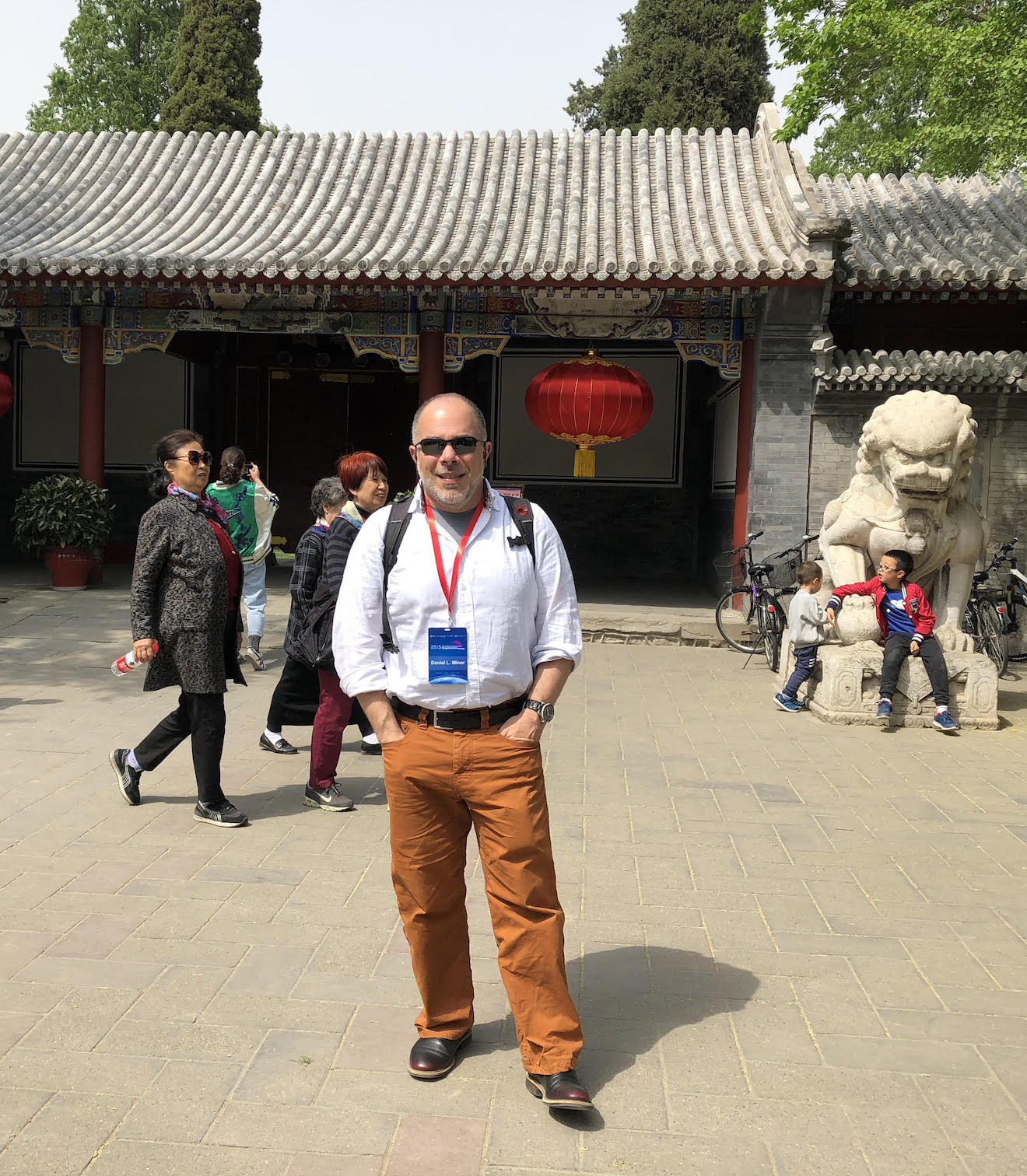 Daniel Minor at the International Conference on Neurostructural Biology in Beijing in April 2019.

Minor grew up in a family where no one had gone to college and few finished high school. Both grandfathers had worked in the coal mines. The next generation worked in some form of light manufacturing, including Minor’s father, who rose from worker to manager of a factory that made crayons and tempera paints. At age 14, Minor went to work part-time in the factory, loading trucks and mixing pigments with chalky calcium carbonate powder.

Evenings, Minor trained as weightlifter at the local YMCA. He competed in tournaments at the Holy Savior Weight Lifting Club in the basement of a Catholic church near Philadelphia. He specialized in the snatch and the clean and jerk and at age 16 was state powerlifting champion.

As a work-study undergraduate at University of Pennsylvania, Minor avoided slinging hamburgers by finagling jobs in various research labs focusing on proteins, cell biology, and nuclear magnetic resonance. As a graduate student, he joined Peter Kim’s lab at Massachusetts Institute of Technology.

There, he published three Nature papers, the most important showing how much context matters to the way proteins fold. Depending on its amino acid neighbors, for example, the same 11-residue “chameleon sequence” he designed could fold into a beta sheet or a helix. Memorably, Nobel Laureate Max Perutz noted Minor’s discovery in a perspective piece. “That was awesome,” he says.

In a flurry of indecision, Minor cycled through three labs. He started in Boston and followed a soon-to-be-ex girlfriend to Cambridge, UK. There, he fulfilled a childhood dream as a postdoc at the LMB working with Nigel Unwin for a short period. He reset his postgraduate research at UCSF, where the wife-husband team of Lily and Yuh-Nung Jan were working at the forefront of cloning channels.

“Two things amazed me about Lily,” he says, “She always made time for me, and she mostly thought my ideas were good.” She encouraged Minor to develop a bigger picture perspective, a legacy he wants to pass on to others. There, he built an ion channel skill set portfolio from function to structure and back.

When he moved to San Francisco, Minor dropped his LMB project, a modular approach to the nicotinic acetylcholine receptor. Meanwhile, a talented postdoc who shared a passion for acetylcholine receptors was working in an Amsterdam lab and had found another way to solve a structure of the receptor extracellular domain. They met at a structural biology meeting, bonded over their interest in the nicotinic receptor, and eventually married. Their wedding invitation featured the structure she solved.

“It’s a good lesson,” says Minor, who since age 16 strived to plan ahead thoughtfully and make the right choices. “Here’s an example where my best-laid plans all fell apart, but ended up working out better than I could ever have imagined.”

His good fortune held. He applied for a geneticist job opening in the UCSF Cardiovascular Research Institute. He had worked on yeast genetic selections to study ion channels in the Jan lab, and there are ion channels in the heart. These two factors and a broad view of the search committee led to a job offer. “They just wanted a good scientist working on cardiovascular-related topics,” he says.

Minor began working on ion channels just as other groups had cracked the first ion channel structures, and atomic protein measurements were starting to become relevant to a field that had long relied on mutational and electrophysiology studies. “Their functional relevance took some time to percolate into the field,” he says. 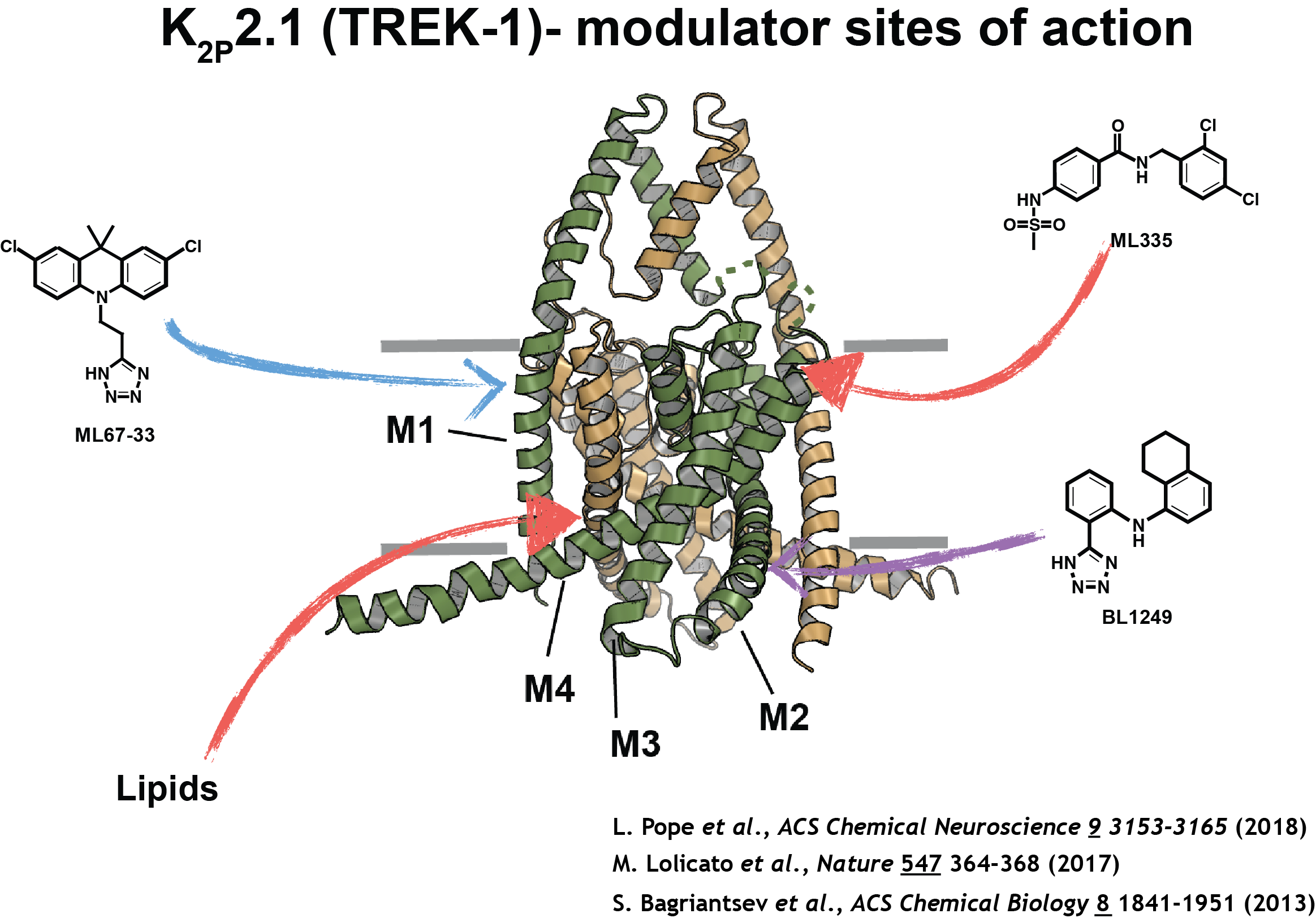 The structure of K2P2.1 (TREK-1) shows modulators and their sites of action, defined structurally (red arrows) or functionally (blue and purple arrows).

Meanwhile, the Minor lab also runs a program to find small molecules that can selectively inhibit ion channels for scientific study and for drug discovery.

The thread that ties the work together is protein chemistry, he says. “We’re trying to understand how proteins work, how they move, how they function, and how we can learn to control their actions.”