Inside cells, DNA is coiled around histone proteins, making spools of nucleosomes. Cynthia Wolberger studies the molecular machines that unwrap the chromatin packing to transcribe or repair genes.

A recent study investigated the way in which a protein called ubiquitin that is attached to a histone helps an enzyme that attaches another type of chemical tag to the histone core of a nucleosome. For those new to the field, Wolberger suggests thinking of it like this: The enzyme pivots on the surface of a nucleosome like a red robin standing on the ground, looking around for worms and occasionally dipping down to pluck one out of the dirt.

In this case, Wolberger was describing a dramatic unraveling of the histone core. The ubiquitin attached to one histone (H2B) moves one end of the enzyme into position, while a different histone helpfully sends up its tail to help the enzyme unravel a third histone. The resulting opening in the histone allows Dot1L to dip down and insert a small methyl group to a specific spot on the histone protein, which activates a gene. 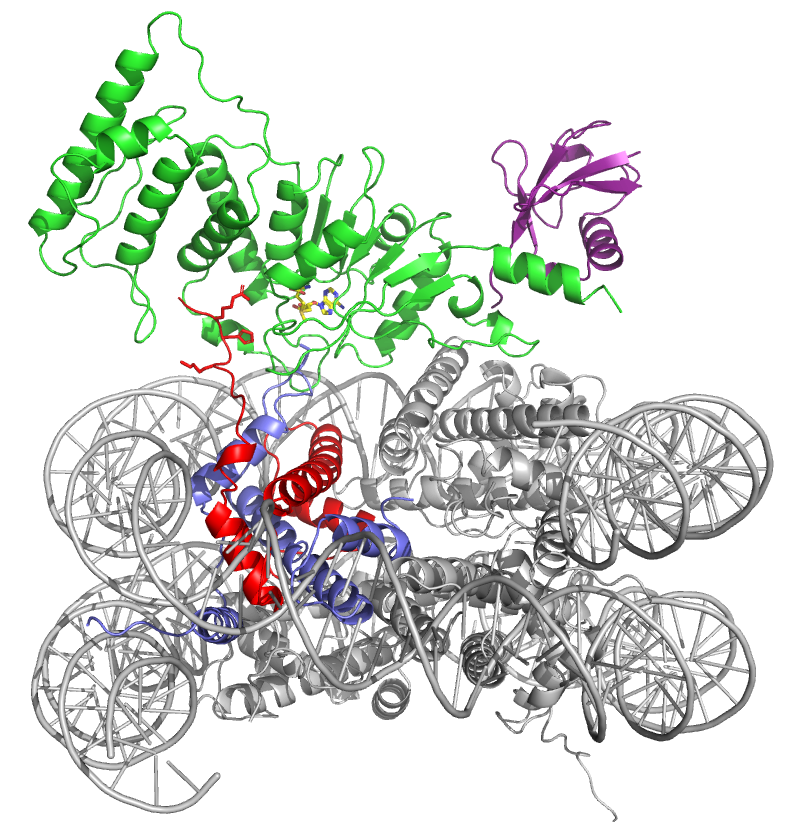 When the Dot1L enzyme (green) attaches to the nucleosome (gray) with the ubiquitin (purple) tag, the nucleosome tail (red and blue) swings up to secure the enzyme to its surface, causing a cascade of other changes in the nucleosome’s structure. Image credit: Courtesy C. Wolberger.

The details come from a pair of the lab’s first cryo-electron microscopy (cryo-em) structures, reported in Cell March 2019. Because the Dot1L enzyme is mutated in mixed lineage leukemia, a form of childhood leukemia, the discovery of how the nucleosome changes shape when Dot1L docks is potentially medically relevant.

Wolberger has a particular interest in how ubiquitin alters the chromatin packaging of DNA, as well as cross talk with other molecules that affect the histone cores. Ubiquitin does more than stimulate an enzyme to deposit a methyl on histone. She expects to find elaborate molecular contraptions that defy simple explanation.

“I think of a cell as a giant Rube Goldberg machine,” she says, referring to the 20th century cartoonist who drew absurdly complicated inventions composed of chain reactions to perform otherwise simple tasks, such as lighting a cigar. “It’s a crazy assemblage of all these things that happen. Somehow it works in the end. I love to work at integrating the whole.”

Wolberger grew up in New York City. She became interested in research reading the books about science that her brothers received as gifts. She attended the Bronx High School of Science, a public school famous for producing more Nobel Laureates than most colleges and universities. A summer program focused her interest on physics, which she chose as her major at Cornell University.

For graduate school, she made a last minute switch to biophysics, ending up at Harvard University. She had never heard of structural biology before and ruled it out almost immediately.

She changed her mind during a rotation through the laboratory of the new head of biophysics, Don Wiley, who ran a combined X-ray crystallography laboratory with Steve Harrison. There, she dove into a collaborative project with Stephen Harrison and the neighboring lab of Mark Ptashne on a DNA binding protein that regulates the lifecycle of a virus that infects bacteria.

She continued her work on DNA-binding proteins as a postdoctoral fellow, working on a protein that governs the sexual behavior of yeast by repressing genes that allow yeast to grow, and allowing another set of genes to transform the cells for mating. She began the work at the University of California, San Francisco and moved on to a postdoc at Johns Hopkins University School of Medicine in Baltimore. There, she joined the faculty and stayed for more than 30 years.

Fortunately, Wolberger’s graduate and postdoctoral studies coincided with technical advances supporting the next generation of crystallography, such as protein over-expression, synchrotron beam lines, and area detectors. Meanwhile, structural biology was transitioning from a scientific endpoint in and of itself to a powerful tool to examine biological questions more holistically.

“All of a sudden, everyone wanted to hire a structural biologist,” she says. She has recently watched the cycle repeat itself, this time driven by technical advances in cryo-EM.

When she established her own lab, Wolberger continued to focus on proteins that activate or silence genes. DNA binding proteins don’t work alone. Instead, many proteins and enyzmes converge in complexes to turn genes on and off in a process known as combinatorial regulation of transcription. Her lab spent most of the 1990s atomically articulating molecular interactions in this process.

In the decade beginning 2000, Wolberger branched out. Her lab solved one of the early structures of SIR2, which was becoming famous for its role in lengthening the lives of yeast in response to stress, such as calorie restriction. Sirtuins are known to play key roles in biological processes, including transcriptional silencing, inflammation, fat mobilization and aging.

Back in graduate school, Wolberger had dismissed enzymes as exceedingly boring. But six months after her lab began working on a SIR2 complex, others reported the protein also functioned as an enzyme. “The horror,” she jokes.

Now she’s all in. “I saw the light,” she says. “It turns out enzymes are pretty cool, as others had long recognized. Enzymes do all these super-important things to chromatin.”

Since about 2006, the lab has turned its attention to ubiquitin. The ubiquitin work began as a fluke, Wolberger says. A student in her lab volunteered to help out Cecile Pickart, a faculty member who studied ubiquitin. A small collaboration evolved into a major focus.

Ubiquitin is a small protein best known for tagging molecules for recycling in the cell. But historically, the first known ubiquinated protein was one that targeted chromatin to help silence genes.

In one milestone paper published in 2016 in Science, Wolberger’s group reported the complicated structure of a four-protein complex, called SAGA, bound to ubiquinated nucleosomes.

The science fascinates Wolberger, but she says her greatest delight is the success of people she has mentored, no matter where their career path takes them. If she has one overarching philosophy, it’s that mentors are for life, not just a few years in the lab, citing the longtime support of Harrison after graduate school.

“The best mentors are looking out for people years after they have left the lab,” she says. “We’re all still learning how to be good mentors. Like with kids and parenting, you figure it out with first one, and then the second one comes along and they’re totally different."

Like so many others, Wolberger’s lab closed for several months during the coronavirus pandemic in spring 2020. But the pandemic also forged a transition she had wanted to see in the medical school course she directs on basic science. For fall 2020, all the lectures (about 50-60) will be prerecorded with instructional designers and professional video support. The students then attend required small discussion groups.

In another class on protein structure, she has abandoned slides and instead showed students how to use Pymol, a molecular graphic program that enables them to explore the structures in three dimensions.

Like many during the pandemic, Wolberger has had to adjust to a largely online life to interact with colleagues during the pandemic. But Wolberger has earlier onscreen experience than most. Back in her New York City nursery school, a show called Candid Camera visited and asked the children to wink. It’s not easy to wink at age 4, but the earnest efforts of Wolberger and her classmates remain delightful at YouTube Candid Camera.