After finishing his postdoctoral research at the Yale School of Medicine in 2008, Gang Dong moved his family to Vienna, Austria, to start his own research group at the newly established Max F. Perutz Laboratories (MFPL) at the University of Vienna and the Medical University of Vienna. He had no apartment and didn’t speak German, and the relative who had been helping them with their three-month-old daughter had moved back to China. “The first few months were very hard for me and my family,” says Dong, Junior Group Leader at MFPL.

Since then, Dong has established his small lab as a key player among researchers interested in the assembly of the centriole, a barrel-shaped cellular structure central to the formation of cilia, antenna-like cell surface protrusions essential for cell motility and signal transduction. Cilia play important roles in nearly every human organ and also are essential for the survival of many parasites, such as trypanosoma brucei that causes African sleeping sickness, giving Dong’s work the potential for wide influence. 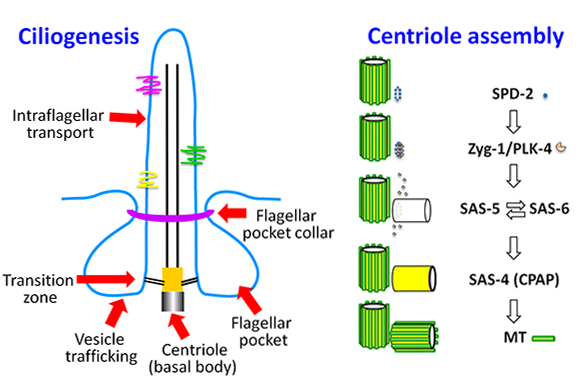 Gang Dong's research focuses on cilia, antenna-like protrusions on cells, including most human organ cells and many parasites. Dong is using structural biology to gain a deeper understanding of the building blocks of cilia, such as the centriole and the flagellar pocket collar seen in some parasites.

Dong’s journey to Vienna began in the 1980s when he was attending high school in southern China. His grandfather worked on plant pathology and encouraged Dong to follow suit. Dong did, but it was a long shot. Of the sixty graduates of his high school class, only six were recruited for college. When he started his study at the China Agricultural University in Beijing in 1989, getting a slot was a rare honor.

Gang was shocked to see the devastation tiny plant viruses could cause crops and he wanted to understand how they work. “This motivated me,” says Dong. “I wanted to study the structures of these pathogens and find out how to control them.”

So he enrolled in the biophysics Master’s program at Peking University where he established a protocol for the purification of the rice dwarf virus. He later collaborated with Wah Chiu’s group at the Baylor College of Medicine to solve the structure using cryo-electron microscopy (cryo-EM). The structure they determined represented one of the highest resolution structures solved by EM at that time. “After that, I was determined to continue my studies in structural biology,” he says.

For graduate school, he chose the University of Texas, Austin. He’d initially planned to use X-ray crystallography to solve the structure of small protein B, an RNA binding protein in bacteria, but despite exhaustive efforts, high quality crystals eluded him. In the end, in the lab of David Hoffman, he solved the structure using nuclear magnetic resonance imaging (NMR).

Dong joined the lab of Karin Reinisch at Yale University with a singular goal for his postdoc: learn crystallography. There, he solved the crystal structure of the lupus autoantigen protein at 1.6-Angstrom resolution. “I was very excited to see the electron density map and how you can determine the structure at near atomic resolution,” Dong says. He went on to solve five more crystal structures in the Reinisch lab, most of these focused on membrane transport proteins.

After that, Dong and his family relocated to Vienna, bringing little with them. Though he did bring along SBGrid, making software management one of the only easy parts of his transplantation to Vienna.

Today, instead of plant pathogens, Dong’s group studies human pathogens like trypanosomes. This parasite’s flagellum is structurally identical to the cilium but with a unique pocket at its base. This pocket could be a target for potential drug interventions, so Dong’s group has zoomed in on the T. brucei flagellar pocket.

So far, the team has extensively characterized one protein that forms the collar, the BILBO1 protein, using a combination of crystallography, NMR, EM and other methods. Dong’s group is now teaming up with a parasitology group in France to further characterize the assembly and function of the flagellar pocket collar. “In the future, we hope our structural studies will provide some basis for drug design that might be used to control sleeping sickness in Africa,” says Dong, who has similar goals for his work with toxoplasmosis and malaria parasites.

Dong is also collaborating with multiple groups to work out how the centriole assembles. While the centriole was identified nearly a century ago, only recently have high-resolution structures of the five core proteins that form it allowed for a picture of how the cylindrical structure forms. Gang’s group is now working to characterize centriolar duplication, with recently received funding from the Austrian Science Fund to support this work in the coming years.