About age 16, pondering his future, Evripidis (Evris) Gavathiotis decided he wanted to work as a chemist in drug discovery. It was personal. Growing up in Greece, he had witnessed his mother suffer from a chronic condition with periods of misery, unrelieved by medication. When mother and son talked about his career choice, she suggested he become a doctor.

"Doctors just take care of one person at a time," Gavathiotis remembers telling her. "I want to work on a massive scale. I want to try to cure everyone. I want to become a scientist, not a physician."

Besides, chemistry was his favorite subject.

Gavathiotis started in industry, but now he discovers potential drugs as a university professor. Since 2011, he has run a laboratory at Albert Einstein College of Medicine in New York, where his group studies molecular pathways in cell death and cell survival, looking for ways to block or augment the activity of key proteins.

His lab develops small molecules with potential to treat conditions as diverse as cancer, heart attacks and Alzheimer's disease. His name is on 40 U.S. patent applications, and he has co-founded three biotechnology companies.

At Einstein, the Gavathiotis lab has built expertise in NMR, X-ray crystallography, biochemistry, drug design, chemistry and cell biology, mostly related to cancer. For other possible disease applications, his group teams up with colleagues.

"Einstein is a very collaborative place," he says. "It gave me the opportunity to try to think about my science in a more expansive way. There's always a flip side. For example, we try to promote cell death in cancer cells, but then if we try to inhibit cell death, we can have benefits in heart disease or neurodegeneration."

Gavathiotis graduated in chemistry from University of Crete. For his PhD, he found a good mentor match at University of Nottingham in UK, Mark Searle, and a fellowship that was supported by a big pharmaceutical company.

In the Searle lab, Gavathiotis used NMR and molecular modeling to understand how drugs with anti-cancer activity interact with certain conformations of DNA and determined one of the first structures of a drug-bound human telomeric DNA repeat. He also was thrilled to work with another chemist, Malcolm Stevens whose work had led to the approved drug temozolomide to treat brain tumors.

Following his plan, Gavathiotis then joined a young company in Cambridge, UK. He applied in silico computational methods to find small-molecule drug candidates that target proteases of the apoptosis pathway. To make greater contributions to the science, he realized he needed to know more about the biology behind this pathway.

"So I decided to go back and do a postdoc," he says. It wasn't easy to convince people he really wanted to leave industry and return to a training position. But in 2003 he found a place at Rockefeller University in New York City, the academic home of several Nobel Laureates. As a bonus, he returned to life in a big city whose hustle and bustle reminded him of his hometown of Athens.

Three years later, his Rockefeller mentor Milton Werner made the reverse career move, taking a position in industry and closing the lab. He recommended Gavathiotis head to Boston to finish his postdoctoral training. Fortunately, in 2007, Loren Walensky at Dana-Farber Cancer Institute needed someone in the lab with expertise in NMR.

There, Gavathiotis began to see his future in an academic setting. "Walensky was a superb mentor," he says. "I learned a lot not only about the science, but how to write grants and how well he manages the lab." A year and a half later, Gavathiotis generated a first-author paper in Nature and had lots of ideas to explore. He decided to start his own lab, back in New York.

A decade later, he has made a lot of progress toward his teenage goal. Several prototype therapeutics for oncology and aging-associated diseases are licensed to companies that are moving them toward Investigational New Drug applications, an early step toward approval by the U.S. Food and Drug Administration for clinical use. And he has been eyeing new projects with tantalizing translational possibilities.

"At the fundamental level, we're looking at key proteins that affect [cell death and survival] processes at the molecular and atomic level," he says. "We try to really study the mechanisms of how proteins function or malfunction in cancer or other disease, then we go on to target them with small molecules and understand how to control a protein’s function in specific signaling pathways. And eventually, we develop these small molecules into prototypes of therapeutics that we hope one day will be in the clinic."

He enjoys seeing this philosophy play out in his group meetings. "We not only have to think about the science — a new protein structure or a new protein interaction — we also try to see the application," he says. "Not necessarily for commercialization, but whether this is going to become a therapeutic approach, or can we use it as a technology to facilitate or accelerate more of the basic science. Sometimes, we look at the same problem people looked at 10-20 years ago, but now you have novel technologies, and you can come back to the same problem, and you find new things, and that's an important part about how science goes."

One of the signature areas of the Gavathiotis lab goes back to his Dana-Farber postdoc days. It involves a protein called BAX, a molecule that can cause cell death. BAX quietly lurks in the cell in an inactive conformation. But when BAX is activated, its hydrophobic surfaces are exposed and gravitate to the mitochondria membrane. An anchor helix connects to the membrane, and more changes create a pore—a conformational strategy similar to some toxins— allowing key mitochondria proteins to spill out.

Gavathiotis opened a new potential therapeutic approach of direct BAX activation when he described how a known trigger latches onto BAX, revealing the activation site of BAX and associated conformational changes (Nature, 2008, Molecular Cell 2010). Critically, he used a NMR technique that detects weak interactions to catch the BAX activator's hit-and-run style of triggering conformational changes in BAX and then leaving.

Since then, Gavathiotis and his team have identified key sites on BAX, as well as molecules to turn the cell death protein on and off (Nature Chemical Biology 2012, Molecular Cell, 2016, Nature Chemical Biology 2019, Nature Communications 2021). As a cancer fighting strategy, they developed a small molecule called BTSA1 that can bind the trigger site of BAX and induce conformational activation of BAX leading to apoptosis (Cancer Cell, 2017). BTSA1-induced BAX activation effectively suppressed human acute myeloid leukemia growth in mouse xenograft models and patient samples while sparing healthy cells, they reported. 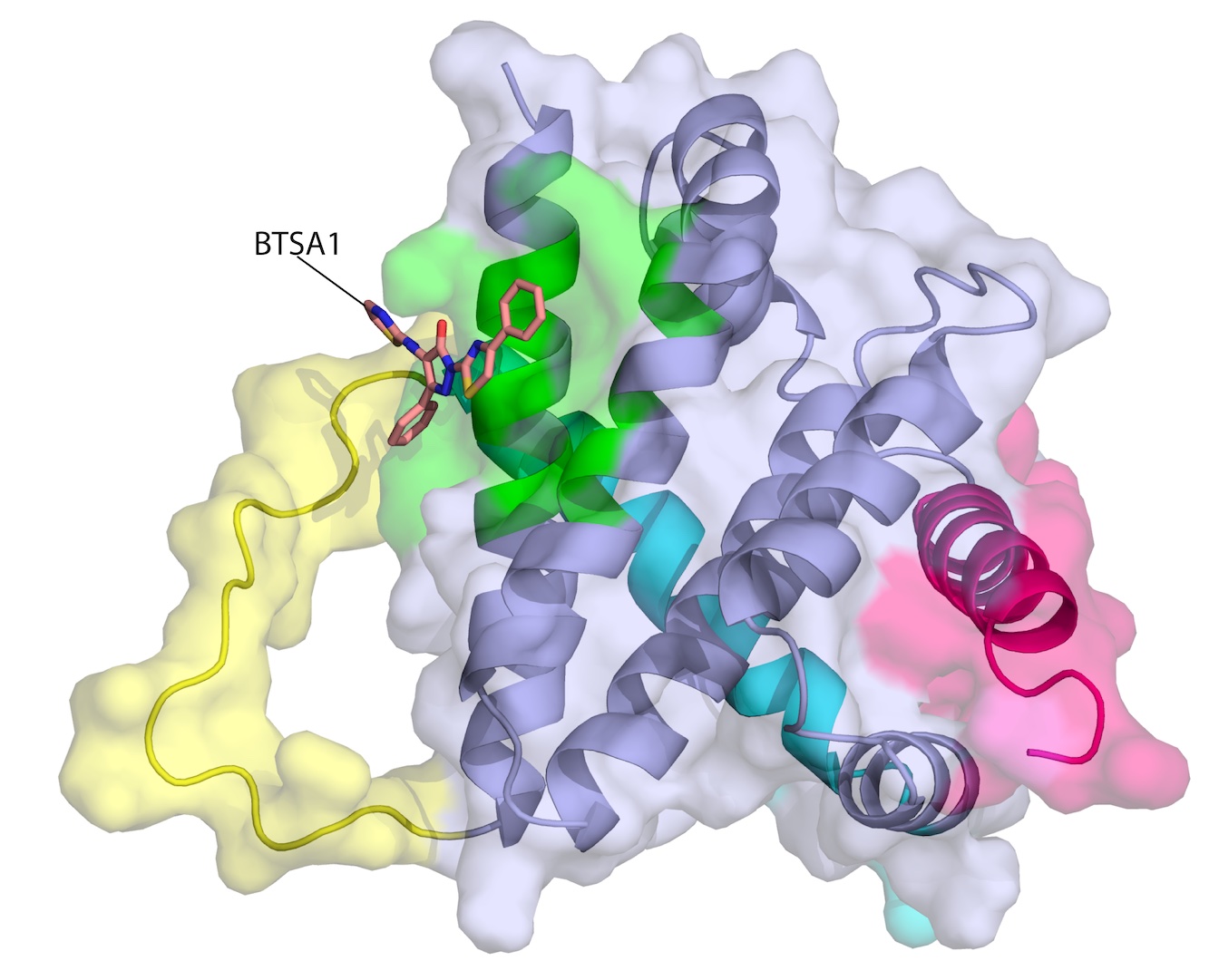 On the flip side, he teamed with a cardiologist interested in protecting the heart from a commonly used cancer chemotherapy drug, doxorubicin, that works through BAX for another cell death process called necrosis. They found several small molecules, including BAI1, that can bind to BAX and block its lethal transformation, protecting cardiac muscle cells without affecting the activity of doxorubicin in tumors (Nature Chemical Biology, 2019, Nature Cancer, 2020)

A complicated molecular signaling picture of apoptosis has emerged. BAX, its inhibitors and its activators form a dynamic triangle of interactions that responds and adapts in ways Gavathiotis and his colleagues are just beginning to understand.

"It's very regulated system," he says. "Obviously, you need to use this pathway in your normal cells. Every day, billions of cells die, because they are either not necessary anymore, like immune cells, for example, or they start malfunctioning with mutations, and that tells the cell to use this pathway to kill the cell. Cancer cells find ways to manipulate these proteins and change the expression levels and interactions of these proteins. We try to find the vulnerabilities of cancer cells, and take advantage of those by the targeting of a single drug, or a combination, to drive cancer cells to apoptosis."

In the process of refining the specificity of BAX activators to fight cancer, they discovered normal cells have less BAX than cancerous ones, and therefore cancerous cells make more inhibitors of BAX, which work by neutralizing BAX and its activators. So the lab came up with a combinatorial strategy—a direct BAX activator and an inhibitor of the inhibitor (Nature Communications, 2022) "It's a numbers game, he says. "You need sufficient active BAX molecules to kill the cancer cells.”

Gavathiotis discovered SBGrid during his Dana-Farber postdoc. "I had a lot of experience with software, and it's a lot better to work on academic software that someone else is maintaining," he said. "I spent a lot of time during my training using several academic software packages that needed a bug fixed or didn't really talk to each other. For NMR and crystallography, we still use SBGrid."

Meanwhile, the lab explores other life-and-death decision-making proteins in healthy and malignant cells. For example, a recent paper reported on small molecules that can activate or inhibit mitofusins, proteins that live on the outer membranes of mitochrondria and enable them to fuse on demand, such as when the cell needs more energy or needs to degrade dysfunctional mitochondria (Nature Communications, 2022). The discovery has potential to treat mitofusin dysfunction-related diseases such as type 2 diabetes, Charcot-Marie-Tooth type 2A neuropathy, neurodegeneration, and cancer.