When Marcos Sotomayor explains his research out loud, his voice tickles the topic of his studies. A core biological question in his laboratory addresses how hearing happens at the molecular level.

For words to be heard, sounds reach deep into a listener’s ear and vibrate bundles of hair-like projections called stereocilia. The bundles are perched atop hair cells, the sensory cells of the inner ear.

When the bundles move, channels open at the stereocilia tips. Potassium and other ions rush in, causing release of chemicals at the hair-cell base, where auditory nerves translate them to electrical signals that zoom to the brain.

For decades, scientists have been searching for the molecular identity of the mysterious channel at the hair-cell stereocilia tips. Since the activity of the stereocilia tip channels was discovered more than 40 years ago, multiple protein candidates have been proposed and then ruled out. Sotomayor and his collaborators may be closing in on the real identity of the channel and the mechanisms by which it is activated.

Sotomayor was born in Caracas, Venezuela, to Chilean parents who had fled the country during the military dictatorship of Augusto Pinochet. The family resettled in Chile when Sotomayor was 6 years old. Five years later, democracy was reestablished.

A mixture of math and art is something of a family tradition. Sotomayor grew up amidst the drawings of his architect father and the creations of his sculptor mother. He remembers being interested in how things work from a young age and continues to be fascinated by the way little machines in people’s bodies make life happen.

He first encountered hearing and hair cells as a graduate student in physics at University of Illinois at Urbana-Champaign.

After a masters degree from Universidad de Chile, Sotomayor arrived in the northern hemisphere in 2002 with a working knowledge of computer simulations as applied to gas phase transitions. He knew nothing of biology, but he met Klaus Schulten and was drawn to the lab’s molecular dynamics simulations of biological systems.

His main graduate project focused on bacterial mechanosensitive channels. In swollen bacteria that have absorbed too much water, these membrane proteins help release pressure as they assist in restoring osmotic balance. The channels physically sense tension in the membrane, and their tiny holes open like safety valves. Using the protein structure of those channels, Sotomayor ran simulations to determine when they were open or closed, and how they transitioned from closed to open.

Channels on the tips of hair cells also respond to mechanical stimuli. Sotomayor learned about them when David Corey of Harvard Medical School visited the Illinois lab. In the 1970s, Corey and his mentor, A. James Hudspeth, first discovered the existence of such channels. Now, Corey’s lab has a molecular candidate for the channel.

Sotomayor ran simulations that predicted it could be springy enough to function as the channel gate, opening and closing as detected in other studies. Subsequent experiments from other labs corroborated the simulation results, but the channel candidate did not hold up for other reasons.

When Sotomayor finished his PhD in 2007, he wanted to try biological experiments. Until then, he had interacted with experimentalists and run many simulations, but had never even handled a pipette.

As his research interests were pivoting, other scientists had discovered the identity of the two proteins that link the tip of one hair-cell stereocilium to the next taller one. The tip links are an essential part of the mechanism that translates sound into brain signals. Without tip links, there is no hearing. Tip links connect to the mysterious hair-cell channel, opening it when hair-cell bundles move. Sound sets the mechanism in motion. The vibrating hair-cell bundles stretch the tip links, which in turn pull on the channels.

He contacted Corey and proposed a postdoctoral project to determine the structure of the connection between the two tip-link proteins. Neither knew how to solve a structure, so they recruited Rachel Gaudet, who runs a structural biology lab at Harvard University.

Sotomayor became a frequent passenger on the M2 shuttle across the Charles River, moving between the Gaudet lab in Cambridge and the Corey lab in Boston. Group members from both labs, including Wilhelm Weihofen, a close collaborator on the tip-link project, trained him. In 2012, they reported the structure of the handshake between the two slender proteins that form the tip link, protocadherin-15 and cadherin-23, in Nature. The paper also looked at how deafness mutations disrupt tip-link function. 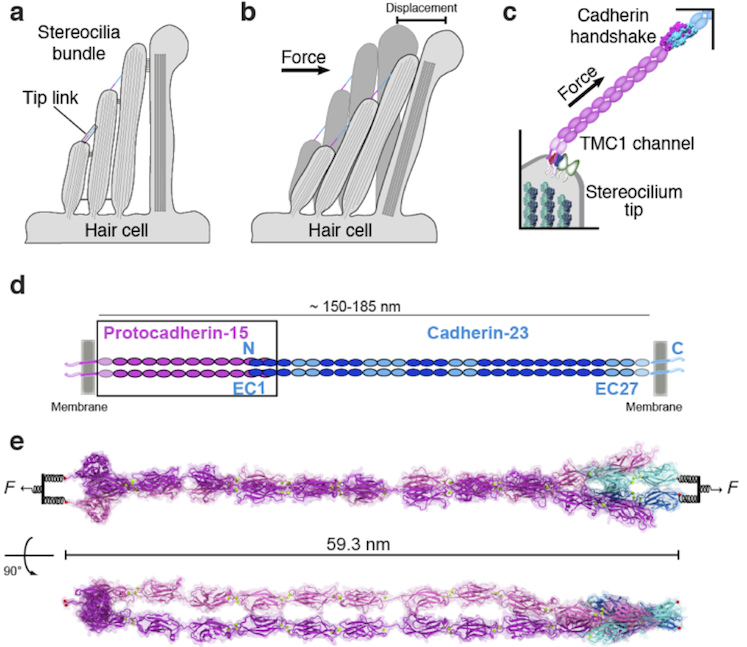 Hair cells and tip links: (a) Tip links and stereocilia are located on top of hair cells. (b) Force from sound moves the bundle and activate the transduction (TMC1) channel. (c) Tip links pull on the TMC1 channel. (d) The tip link is made of protocadherin-15 (purple) and cadherin-23 (blue). (e) Two views of a structural model of the entire tip link under tension.

In 2013, Sotomayor started his own lab at The Ohio State University (OSU) in Columbus, combining structural biology and simulation. There, he expanded the quest to understand how the tip link works in hearing.

His lab has solved more than 20 different crystal structures of different parts of the tip link, culminating most recently in the assembly of the full protein structure of protocadherin-15, the lower part of the tip link that pulls on the channel.

Marco Sotomayor (front row, fourth from left or right) and his research group in 2018.

“A lot of the projects have been successful because of the participation of undergraduates,” Sotomayor says. “With 55,000 undergraduates at OSU, it’s not difficult to find very good ones. Some have solved structures, which is a really fantastic experience.”

The tip-link proteins are modular with repeating subunits that are similar but not identical to each other. Sotomayor makes partially overlapping assignments to undergraduates in his lab: Repeats 1 and 2 to student A, repeats 2 and 3 to student B, and so on.

“Each student gets a part of the protein,” he says. “It’s their own project. At the same time, they’re all using the same techniques and tools and can help each other if someone is failing. That has been really good.”

Assembling the pieces together using the overlaps allowed postdocs, undergraduate, and graduate students to build structural models and run simulations of large parts of cadherin-23 and protocadherin-15, Sotomayor says. The lab is now also exploring how the handshake connection between these two proteins has changed throughout evolution, as well as the implications of the handshake molecular evolution on sound sensing in various species.

In parallel work by graduate students and postdocs, the lab found a new fold in a part of protocadherin-15 that facilitates dimerization and may connect to the hair-cell channel. Similar folds are proposed to exist in other long cadherins. They published the findings in a 2018 paper in the Biophysical Journal. Simulations predict the new domain is mechanically weak and could break when loud sounds thrash the hair cells, a potentially protective mechanism the group is exploring further.

Sotomayor has continued to collaborate with David Corey and Jeffrey Holt at Harvard Medical School on the hair-cell channel. “We think the right channel belongs to the transmembrane channel-like TMC family of proteins,” he says. No atomic or high-resolution structures have been solved for any member of this protein family so far. 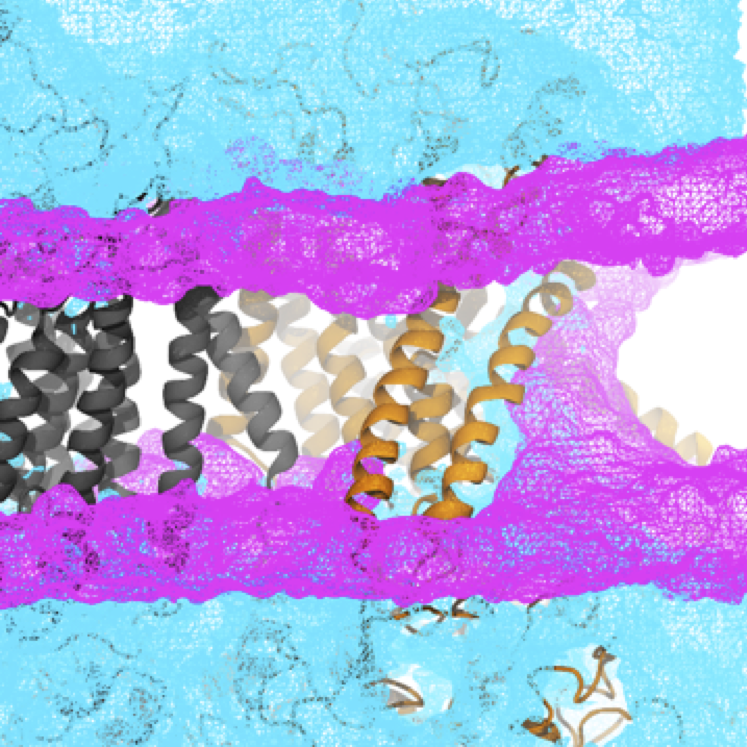 A simulated model of the ion-conducting pore in TMC1 shows a stable water channel (blue) surrounded by transmembrane helices of TMC1 (beige, brown, grey), as well as phospholipid headgroups (purple).

They built homology models using another set of proteins (Tmem16), based on sequence similarity and other data that suggest they are structurally related. Using the model, the team is looking for the pore location in the membrane protein to learn more about how it opens and closes, and how it conducts ions in the presence of physiological voltages like the ones experienced by hair cells in the cochlea. New simulations show that the putative pore in the protein can conduct ions at a rate expected for the hair-cell channel and suggest novel mechanisms of activation by tip links.

Work on the tip-link proteins also led to questions about other cadherin proteins, which typically form adhesive filaments that link cells together and that are involved in disease. For example, his lab studies cadherin-17, implicated in cancer, protocadherin 19, implicated in epilepsy, and protocadherin 1 in the lung, which is implicated in asthma and respiratory diseases and seems to be necessary for hantavirus infection. Structures of these proteins are revealing various molecular modes of adhesion.

An unrelated small project has more to do with environmental health than human health. The Sotomayor lab collaborated with colleagues in Chile to solve the structure of a plastic-eating enzyme in bacteria discovered by Japanese scientists in a landfill. The lab solved the structure and collaborators ran simulations and found special features that may enable these enzymes to chew on plastic water bottles at room temperature. The paper was published in 2018 in the Biophysical Journal. “It is a good example of how the combination of structural work, simulations, and experiments can provide insights into protein function,” Sotomayor says.