A few years ago on a visit to Cape Cod, Michael Rosen was walking along the beach at low tide. He came across a tidal pool set in a giant rock. The pool was about the size of two science journals laid side to side. A large clump of insects floated on top.

He stirred the water with his hand, dispersing the bugs. Then he watched the individuals, probably 100 of them, begin to stick to each other in two and threes and eventually all cluster back together. “Each of them had six little legs that hooked to each other,” he says. “One could have written a math equation to describe how they came together.”

Rosen is no stranger to puddles of water. As a kid, he spent hours at the creek down the street catching frogs and dragonfly larvae. But a new way of looking at protein structures in his laboratory gave him a fresh view of the tide pool insects. The cluster of bugs acted like a scaled up version of the long sticky proteins and nucleic acids his group now studies.

Since 2009, the Rosen lab has been looking at molecules that bind with themselves into a thick cluster. The molecular bundle is so dense that it behaves like a different liquid. The concentrated molecules act like a droplet of oil in water.

The droplets—which technically result from a process known as liquid-liquid phase separation—are formed of long multivalent molecules that take advantage of the many binding sites and ligands. The viscous protein clumps seem to function like cellular compartments without membranes. Studies suggest they perform a wide range of tasks, from RNA metabolism to signaling and gene regulation. 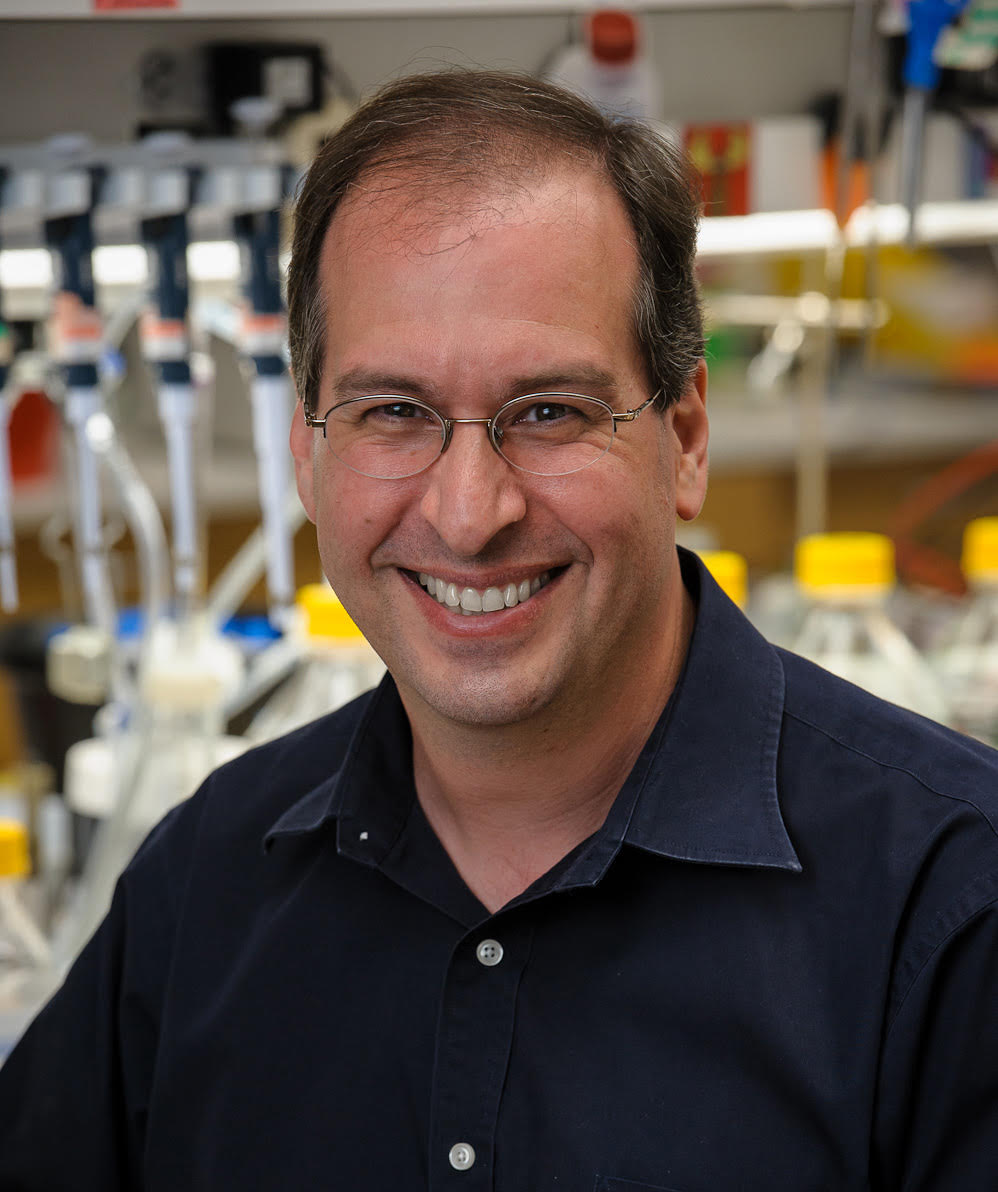 “There’s still a lot of debate about the nature of proteins in droplets,” Rosen says. “Are they disordered? Are they interacting in a way that is constantly churning around? Or are they a discrete structure?”

The droplet phenomenon isn’t new, but it has come into higher focus thanks to improved microscopy. Now researchers themselves have clustered around the topic as a distinct biological principle in health and disease.

“There’s been a mad rush into the field and a reasonable pushback,” Rosen says. “Phase separation doesn’t account for every dot you see in a cell, but it’s popping up in a lot of places.”

The new field has attracted researchers from structural, cellular, developmental and systems biology. It draws deeply on concepts and language from polymer chemistry and condensed matter physics, says Rosen, a Howard Hughes Medical Institute investigator at University of Texas Southwestern Medical Center in Dallas. He and his colleagues organized the first Keystone Symposia on the topic in April 2019, with another on the calendar in 2021.

Several potential connections to disease have generated interest in the molecular concentrates as possible new drug targets. Some molecules implicated in neurodegenerative diseases, such as ALS and frontal temporal lobe dementia, seem to be resident in droplets, Rosen says. Mutations that give rise to disease cause structures that transform the normally liquid globules into a solid. Other studies have implicated other droplet proteins in some cancers.

“We totally stumbled into this problem,” says Rosen. His lab was following a canonical approach to studying signaling molecules, specifically a pivotal player in the signaling sequence that controls assembly of actin, a protein that forms long filaments on the fly to transport cargo within cells and move the cells themselves.

The molecule they were studying, WASP for short, folds in half in its inhibitory state. An upstream signaling molecule releases WASP’s fold, allowing WASP to start the engine of actin assembly. At first, Rosen’s group focused their structural studies on the active signaling domains between different molecules, avoiding an unmanageable stretch of WASP.

“We studiously avoided the hideous horrible linker of 150 residues, a big disordered loop,” Rosen says. Their own experimental results compelled them to confront the hideous linker, a long sticky part of the protein that contains multiple sites able to bind another protein with multiple interaction domains, named Nck. When the lab put WASP and Nck in solution together, they found that WASP and Nck seemed to stick to each other in highly concentrated protein droplets. It was unclear what to do next.

Fortuitously, a couple of smart students from the Rosen lab, Pilong Li and Hui-Chun Cheng, soon attended a summer research program at Los Alamos National Laboratory. A lecture from a computer scientist modeling polymer assembly struck a cord. “They came running back to the lab and said, ‘here is the literature we should look at,’” Rosen says.

Rosen’s group dove into the molecular mechanism underlying the droplets using their WASP model system. Meanwhile, other research groups working independently had reported other protein assemblies that behaved as phase separated liquid droplets within cells. In a 2012 paper in Nature, Rosen extended the biological observations and asserted that liquid-liquid phase separation was an inherent property of the long multivalent molecules.

Since then, the Rosen group has added to the emerging story. Among other findings, they have shown WASP can cozy up to membranes to make actin and that it is more active in making actin when working from a cluster structure. In a 2019 paper in Science, Rosen’s team found WASP lingers longer in concentrated structures, allowing time for all the necessary molecules to come together to make new actin.

“Together, the two papers from our lab and the Groves lab say it’s not merely a quirk of the actin assembly system, but it’s likely to be pretty general to a lot of systems mediated by these kinds of interactions,” Rosen says. “We have this general hypothesis: Interactions between multivalent proteins drive phase separation. From polymer chemistry, we know it should be scale independent.”

In 2019, Rosen’s team tested that idea on chromatin. Chromatin isn’t exactly a protein, but the long thread of nucleosomes and DNA can be viewed as a similarly long string of adhesive elements. The bottom line? Not only does it phase separate, Rosen thinks the liquid-liquid phase separation is likely a mechanism controlling chromatin on some scales. The paper was published in the journal Cell.

“It’s fun to be in a new and developing field,” Rosen says. “There is lots of great science going on. My background is in NMR. I never thought I would have a microscope. Now my lab has two fluorescent microscopes, and we’re building a third.”

Rosen is the son of an English professor (mom) and doctor (dad). As a kid, Rosen liked algebra so much that he thought he might be a mathematician, until a cousin who was a math teacher dissuaded him. Instead, when it came time to major at University of Michigan, Rosen chose a dual degree in chemical engineering and organic chemistry. Biochemistry hooked him during a post-bachelor-degree year on scholarship at the University of Cambridge in England.

When he returned, he changed his graduate school choice at the last minute, from Yale University to Harvard University. He ended up following Stuart Schreiber, who was making the same switch as a faculty member. Rosen worked with Schreiber in the early days of the chemical biology field, focusing on NMR structures of small proteins. In the library on the Cambridge, Mass., campus he met his future wife, Yuh Min Chook, a graduate student in the Harvard Biophysics Program.

They both took postdoctoral positions in Toronto. When Rosen accepted a faculty position at Memorial Sloan Kettering, she took a second postdoctoral position at Rockefeller University. After six years in New York City, Chook went on the job market. Both of them found positions at UT Southwestern in Dallas, where they raise their children and occasionally collaborate on papers.

In his lab, Rosen has been grappling with a new set of questions for the dynamic molecular machines he studies. “It’s still structural biology, but on a different scale,” he says. “The answers are different.” So are the questions.