One day soon, the process of collecting data from cryo-electron microscopes may be as automated as it is on synchrotron beamlines. Until then, Guy Schoehn and his team will be busy training and collaborating with other researchers seeking technical EM expertise and insights.

The new equipment marks a milestone for Schoehn and the institute. “We are quite lucky to have this here,” he says. “France is under-equipped, so there is a lot of pressure on the very good microscopes we have.”

Schoehn understands the popularity of the new in-house EM platform. As a graduate student in the late 1990s, he was attracted to electron microscopy, even though, at 20-40 angstroms resolution, those early molecular images were little more than blurred blobs.

“With EM, you could actually get images,” Schoehn says. In contrast, “if we’re talking about X-ray, you see diffraction patterns—basically some spots. In NMR, you see a spectrum. But you never directly see the sample. In EM, you can directly see what you’re working on. That’s quite magic.”

Since then, the magic has only grown more powerful. His career trajectory has paralleled the “resolution revolution” in cryo-EM, as advances in technology and techniques have enabled scientists to begin to explore molecular structures in atomic detail.

Schoehn grew up near Strasbourg in a small village. His father worked deep in the now depleted potash mines, a major source of potassium used worldwide in fertilizer. As a child, Schoehn remembers always being curious, especially about biology.

In the mid-1990s, his undergraduate studies in biochemistry at Joseph Fourier University first brought him to Grenoble. He stayed in town for a PhD in physics at IBS with Elizabeth Hewat, the only place in France then combining structural virology and cryo-EM.

He left France briefly, for a 15-month postdoctoral fellowship in the London lab of Helen Saibil. He returned to the Grenoble EMBL Oustation with Rob Ruigrok for further postdoctoral studies and eventually settled in as a permanent staff scientist. He met his future wife at IBS during his PhD studies, and she also has a permanent position on the EM team as a research engineer. In 2014, Schoehn became the EM group leader at the IBS, overseeing three teams and the technical platform, with a goal of facilitating access.

For the new EM, a lot of work went on behind the scenes to convince decision makers of its usefulness, to connect with other department heads to find the money, to prepare a specialized room, and to build out the computational capacity with the help of the IT team. After all, each three-day experiment generates 2 terabytes of data.

Once the microscope arrived, he performed testing to make sure everything worked correctly. They undertook the training they needed to train others. Nearly all the groups in the institute wanted access, plus a few more, creating a two-month waiting list.

Beyond training their peers, Schoehn’s group collaborates with more than a dozen other IBS structural biology labs, providing scientific input as well as EM expertise and image analysis to answer a biological question with a sample provided by the collaborator. The lab also has in-house projects on viruses.

“My main interest was and is always viruses,” he says.

One collaboration is systematically unpacking how the measles virus replicates. Despite effective vaccines, measles is a highly contagious disease that kills more than 100,000 people a year. In a paper in Science, the IBS labs of Schoehn, Irina Gutsche and Ruigrok reported a high-resolution structure of the measles capsid, the protein package containing the virus genome that invades and infects the host cells. 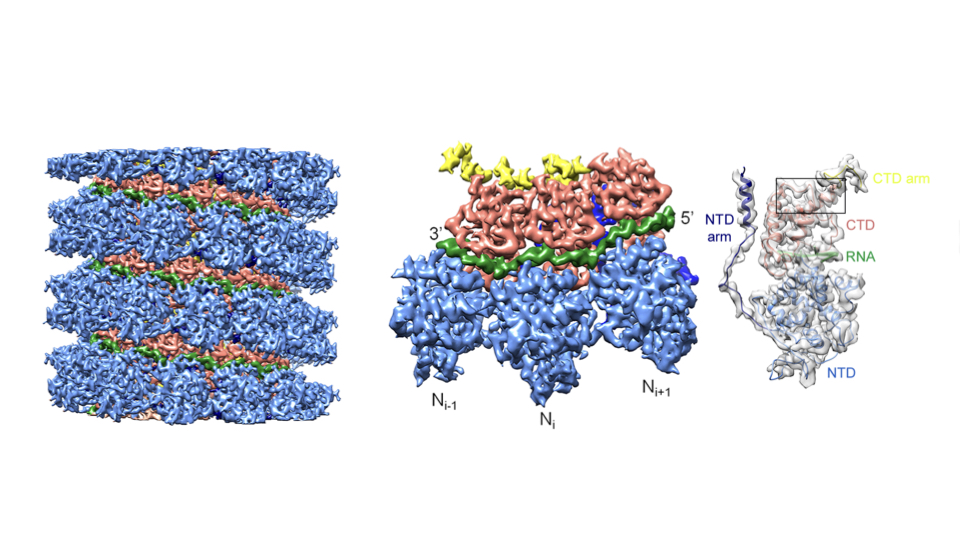 In a 2015 paper in Science, the IBS labs of Schoehn, Gutsche, and Ruigrok reported a high-resolution structure of the invasive measles capsid.

The nearly atomic detail showed how several capsid nucleoproteins assemble in a helical shell around the viral RNA, and how the capsid protein and viral RNA interact. At 4.3 angstrom, the structure stands out for Schoehn as the first atomic-scale EM solution from his group. The findings may inform drug design. The project continues, also in collaboration with Martin Blackledge’s group at IBS.

More than two dozen other papers reflect the lab’s long-standing interest in adenoviruses—viruses that cause common respiratory infections but can be altered to become therapeutic vectors. For example, an adenovirus vector delivered the first effective gene therapy, and the tool is showing promise as a way to deliver oncolytic viruses that preferentially target cancer cells.

In 2005, Schoehn reported the EM-solved structure of an entire adenovirus capsid. Fast forward to 2019, when he and Pascal Fender, a team leader in his group, reported the atomic structure of a complex between the adenovirus and the cell receptor. The findings, reported in Nature Communications, explain how the virus recognizes and interacts with the cell. The structure (about 100 kDa) was one of the smallest complexes solved with cryo-EM at the time.

Another project centers on HIV. When HIV infects a human cell, the virus enters, replicates, and leaves the cell. The exit is called “budding,” and is governed by the virus. In collaboration with the IBS lab of Winfried Weissenhorn, Schoehn’s lab is looking at several proteins involved in the budding, using a similar virus to probe the process.

On his own time, Schoehn occasionally relaxes by constructing detailed structures of his own design. He once crafted a miniature balsa wood model of his first EM for the technician who helped him during his PhD in 1994. He now creates more whimsical objects, including a clock made from music compact discs (CDs) and Kinder figurines (little children’s toys packed in German chocolate eggs sold as Kinder Surprise) or a tiered moving sculpture made from beer cans, an old electrical motor, spare pieces of old electron microscopes and “a whole bunch of other stuff from flea markets,” Schoehn says.

Schoehn displays four sculptures he made from used electron microscopy parts on a shelf in front of a window in his office. One is topped by a 3D printing of an atomic resolution structure of the TET protein (in collaboration with IBS colleague B. Franzetti). A miniature balsa wood model replicates his first EM (red), gifted to the technician who helped him during his PhD.

If Schoehn has a philosophical theme that ties together all the moving parts of his lab, it’s that “you cannot do anything alone,” he says. “If it’s possible to do something, then I try. I nearly never say no because I want to learn the answer. I also want to help other people find the answer. I want to help other people have access to this technology and technique.” He credits the talent pool in his lab for making it possible.