A few years ago, at a New Year’s Eve party in her neighborhood, Phoebe Rice mentioned, as you do, that she needed some methicillin-resistant Staphylococcus aureus (MRSA) strains.

A neighbor responded: “Have you met Bob and Susan?”

They had a freezer-full and were willing to share. Soon after, Rice, professor of biochemistry and molecular biophysics at the University of Chicago, began investigating the mobile elements of DNA that give Staph its methicillin-resistance capability.

Initially she focused on the DNA recombinase protein that allows the mobile element, a type of genomic island, to insert itself into the host cell’s chromosome. Most recently, she identified other conserved genes in the mobile element that appear to help the genomic island replicate itself. The literature says these elements don’t self-replicate, but Rice’s analysis implies that they do, probably after they excise themselves from the host genome.

“That project has ballooned into many because the other genes turned out to be interesting,” she says. “So we’re studying them all through structure and biochemistry.”

Despite the relevance of MRSA to healthcare concerns, Rice’s science is all very basic, and has been from the start.

Though initially, Rice almost didn’t pursue science at all. In the 1980s she enrolled at Brandeis University as a linguistics major. An elective class in biochemistry, which was supposed to be for non-scientists, turned out to be heavy on enzymology and also included structural biology. “It was kind of bait and switch,” says Rice, who took the bait and switched her major to biochemistry immediately.

As a graduate student in molecular biophysics and biochemistry at Yale University, Rice discovered mobile elements and studied her first DNA recombinase, a serine recombinase. Working in the lab of Thomas Steitz, she helped solve the structure. The results, however, were puzzling. “It didn’t look like it could do DNA rearrangements,” she says.

It was known that the enzyme normally functioned within a larger complex, but it wasn’t until years later that Steitz and collaborator Nigel Grindley figured out that the complex triggered a large conformational change to activate the enzyme. “It was a freaky kind of enzyme,” she says. “No one expected the change to be so big.”

As a postdoc at the National Institutes of Health working with Kiyoshi Mizuuchi, Rice worked on another DNA recombinase, the bacteriophage mu transposase. She worked on both the biochemistry, which she’d wanted to learn from Mizuuchi, and the structure. “We showed that the catalytic domains of the HIV integrase and the mu transposase look and act very similarly,” she says. “There’s a common ancestor somewhere.”

In the late 1990s, Rice set up her lab at the University of Chicago and focused on several different DNA recombinase enzymes. Rice uses both structure and biochemistry to understand how the enzymes work, because even when the structure seems to point to a specific mechanism, it doesn’t always pan out biochemically. “I like to have some biochemistry and some structure going on all the time,” she says. “They’re both fun, but also you can certainly learn something about the structure biochemically.”

Rice got interested in MRSA after she’d revisited the puzzling serine recombinase from graduate school and worked out how it is activated in the larger complex. The work, while gratifying, left her wondering: What’s next?

At a talk about MRSA, she learned that the critical drug resistance gene is carried on a mobile element, and that the DNA recombinase that moves the element around was a familiar one. So she started to dig in and learned that, while many studies have examined this mobile element, few have tried to understand the mechanisms that allow it to move to and from Staph strains. “It’s more of a mystery than I thought it would be,” she says. “I thought I’d be the last one to the party.” 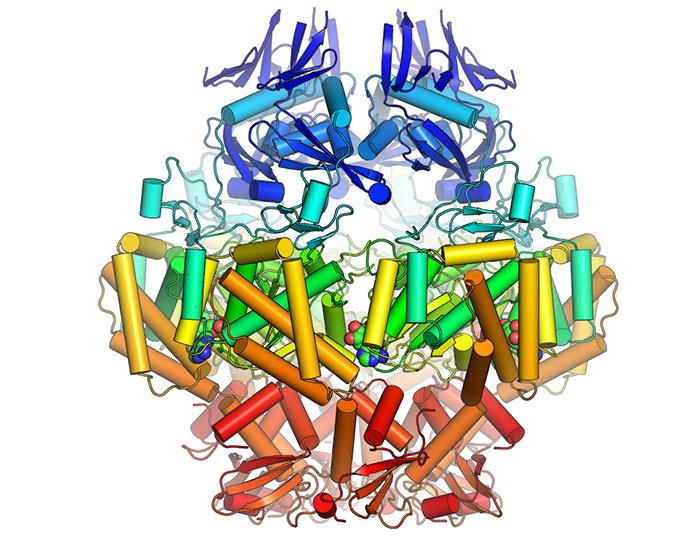 The mobile element that conveys methicillin resistance to staph includes a gene that encodes for Cch, an active helicase similar to other replicative helices.

Rice discovered that the genes surrounding the DNA recombinase were known to be well-conserved, so she investigated and figured out their potential role in replication of the mobile element. Her current work involves learning more microbiology and electron microscopy to support her work with MRSA in the lab. She is also still trying to get the mobile element to move from one Staph strain to another under lab conditions, something that surely happens naturally given what clinicians see.