Katya Heldwein’s first investigations of herpesviruses focused on how they get into host cells. In the process, she became interested in how these viruses get back out again. Herpesviruses replicate their genomes in the cell’s nucleus and package them in capsids. But these capsids are too large to pass through the nucleus membrane pores. “It wasn’t clear how they were getting out,” says Heldwein, associate professor of molecular biology and microbiology at Tufts.

So in 2016, she solved the structures of two viral proteins involved in the process. The work helped her figure out that the proteins work together to form a honeycomb-shaped array that bends the membrane and causes it to bud. “It’s striking,” she says. “The membrane buds and off it goes.” 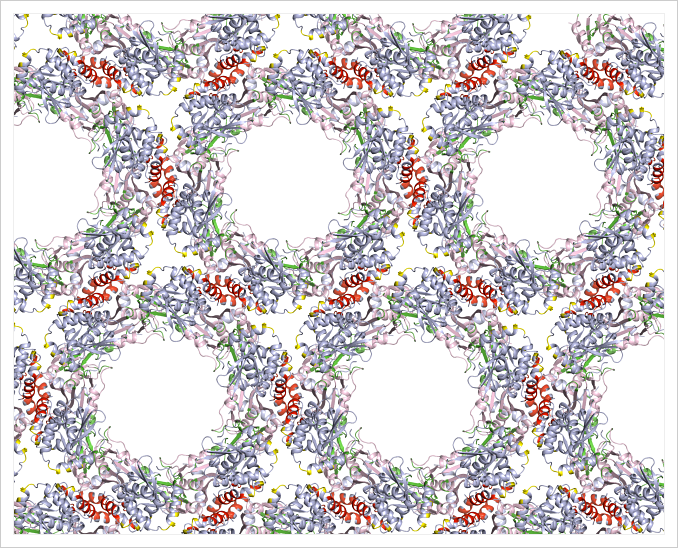 Meanwhile, Heldwein is still working to understand how herpesviruses enters cells. She’s interested in the biology, but she’s also intrigued because herpesviruses are important human pathogens. “In the back of our minds, and sometimes at the front, is how our work can benefit people,” she says.

Early on, Heldwein wanted to study biology, but she majored in chemistry at the Lomonosov Moscow State University on advice from a family friend who told her she needed to learn chemistry first because, she says, “chemistry underlies biology.”

In graduate school, she eased back into biology by enrolling in biochemistry at the Oregon Health and Science University. The program had a strong biological focus, plus the director of the program, Richard Brennan, was a crystallographer. “Structural biology was closer to chemistry and my understanding of how things work on the level of atoms,” she says.

She also solved a mystery about how the protein manages to bind to DNA when its DNA-binding site is 2 bases too long. Biochemical studies suggested a possible DNA shortening, but the mechanism wasn’t clear. So Heldwein determined the structure of the protein bound to DNA and found that the protein untwisted and scrunched DNA so that everything lines up.

The work convinced Heldwein that she wanted to continue with structural biology. But not soil bacteria. “When I described my work to people, they’d say ‘So what?’” she says. “I wanted to work on something easier to explain.”

She found her way to studying viruses as a post-doc in the lab of Stephen Harrison at Harvard Medical School. When her first project stalled, she asked for another to stay busy. Harrison handed over a project that had been one of the late Don Wiley’s. It focused on understanding the entry of herpesviruses into the cell. She took the project and ran with it. “I had the benefit of Steve as a mentor, but also was given a lot of freedom,” she says.

Heldwein zoomed in on a protein nanomachine common to all herpesviruses. She solved the structure of this large and complex protein and found that it mediates the membrane fusion process.

Membrane fusion still wasn’t completely clear, so Heldwein took the project with her when she started her own lab at Tufts. There she solved the structure of another conserved nanomachine that “kicks” the first one into action, an unexpected finding since most viruses have only one fusion protein. She is still pursuing the question, along with questions about how the virus replicates and moves between cells.

In her lab, she relies on crystallography, biochemistry, and is expanding into single particle studies. She also collaborates on a translational project with a lab at Northwestern that looks at how viral particles move within neurons, and a laboratory at the University of Nebraska that focuses on the study of infected animals. “I’d wanted to study biology, but I now consider myself a structural virologist,” she says. “We’re trying to answer questions about viruses from all sorts of different directions.”