Thickly forested slopes define the environs around Heidelberg, Germany, the headquarters of the European Molecular Biology Laboratory. In her hillside EMBL laboratory, Orsolya Barabas probes the small pieces of moveable DNA that define the landscape of modern genomes.

Surprisingly few people have heard of transposons. These “jumping genes” have been flitting around genomes for millions of years, changing locations or introducing new copies of themselves all over the place in plants and animals. They escaped notice until the 1940s, when Barbara McClintock observed them in maize, where they dominate the DNA, eventually earning her a Nobel Prize in 1983.

At the last best guess, about half of the human genome is composed of mostly dormant remnants of transposons. Bacteria, on the other hand, rely on highly active transposons to share genes to help them adapt and survive, such as those that confer antibiotic resistance.

“Transposons are very simple DNA vehicles that can help integrate genetic cargo into the genome,” says Barabas, who works both sides of the potential medical applications, starting from the atomic details. Her group studies transposons used in genetic engineering, seeking to make their gene delivery more efficient. On the flip side, she also scrutinizes transposons that spread antibiotic resistance genes among bacteria, hoping to limit that activity.

The scientific world has been buzzing about CRISPR/Cas9 for targeting and editing a specific location on DNA, but transposons have the edge when it comes to the step of inserting a gene, Barabas says. Transposons also have some advantages over viral vectors, a more established way to insert genes efficiently.

“Transposons are the first line of non-viral gene delivery tools,” she says. “Their applicability is greatest for ex vivo cell engineering.” The early use of transposons has mostly been in personalized immunotherapy clinical trials, in which a patient’s immune cells are withdrawn, genetically altered to recognize and kill cancer cells, and then injected back into the patient.

Barabas and her colleagues have found a way to improve the first and most popular such tool. Called Sleeping Beauty, the transposon was synthesized about two decades ago by Hungarian researchers. The awakened transposon was reconstructed from ancient DNA sequences estimated to be more than 10 million years old, which had been fished out of the genomes of trout and salmon. In their lab in Germany, these same researchers have since modified Sleeping Beauty to be 100 times more efficient, a version called SB100X. 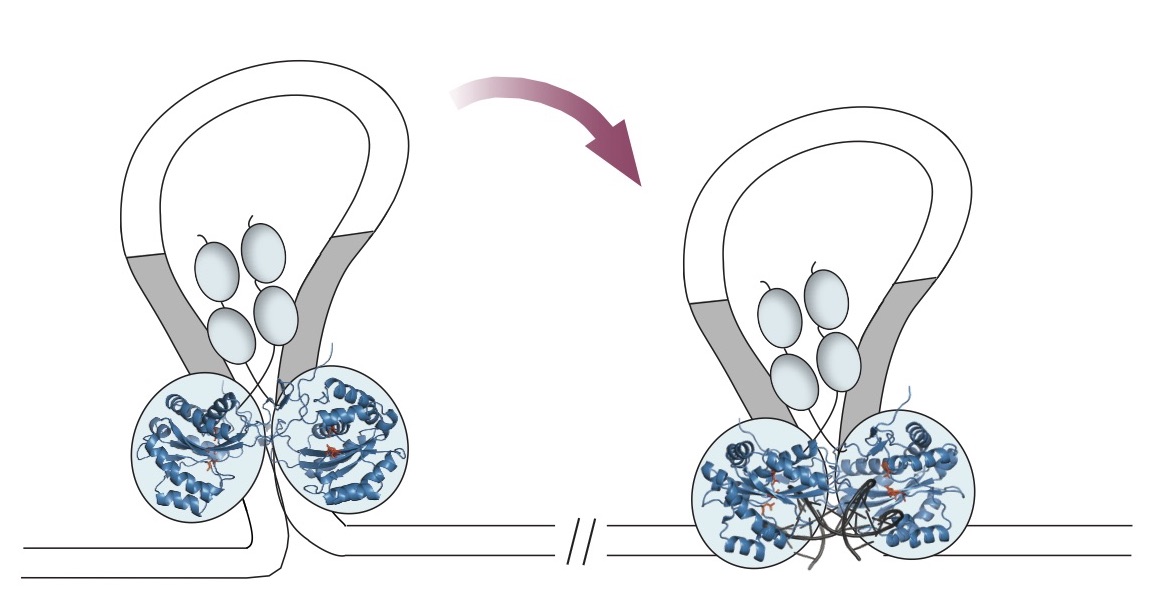 “The coolness of this transposon is that there is no active copy in any genome,” says Barabas, who set up a collaboration with the original Sleeping Beauty team. “It’s a rational reconstitution of an evolutionary pathway. From an application point of view, this is cool because you can use the tool in any genome without unwanted mobilization of genomic DNA.”

In a 2016 paper in Nature Communications, Barabas and her co-authors reported the first crystal structure of the key piece, the SB100X transposase enzyme. Transposases are the workhorses of transposons, clamping, cleaving, and rejoining the DNA.

Using the new structure, the team tweaked some amino acids on the surface of the enzyme to make versions that could bind even better to the DNA where genetic integration occurs.

“They were the first rationally designed hyperactive transposon variants,” she says. The new design has a 30 percent efficiency boost. These variants are not yet in cancer trials, but for patients waiting for cancer treatment, Barabas estimates they may shave as much as a week off a month-long wait for SB100X to supercharge their immune cells.

“As well adapted parasites, transposase enzymes are not naturally optimized to work efficiently,” she adds. “This leaves a lot of room for optimizing their activities for human use or genome manufacturing at will.”

One limitation of transposons for genetic engineering is that they insert cargo in many different places on the DNA. In contrast, the CRISPR/Cas9 system can target a specific DNA site, but then it relies on the host’s DNA repair mechanism to insert a gene, which isn’t good enough for a medical setting, she says.

“Ideally, it would be nice to combine these things: Site specificity and integration,” Barabas says. Until that vision becomes reality, her lab continues to develop more hyperactive variants and seek ways to target them better.

A different project in the lab has the opposite goal: To derail transposon activity—at least those that spread antibiotic resistance among bacteria. The numbers of microbes resistant to multiple antibiotics has been increasing globally, causing concern among scientists and doctors about the threat to public health.

“The fact is that resistance genes already exist for all antibiotics we use,” she says. “There is not a single antibiotic for which a resistance mechanism does not exist.”

Transposons largely drive the spread of antibiotic resistant genes among bacteria, even within the resident microbes in our gut. Stress—such as antibiotic treatment—can trigger bacterial transposons to amplify.

The Barabas lab started with conjugative transposons, which move between the single-cell microbes during the process scientists jokingly refer to as bacterial sex. Normally, two single-celled microbes meet and form a membrane tube to swap DNA and proteins, including transposons carrying genes that confer drug-resistance.

They solved the first structure of a transposon of this class. A 2018 Cell paper reported the transposon DNA in conjunction with the protein machinery that plucks out resistance genes. The structure shows how the enzyme can peel open the DNA double helix in two parts. A single stranded segment forms a bubble that can touch down almost anywhere else without needing to match a specific sequence. 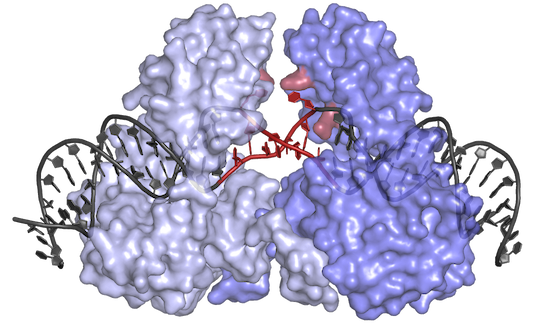 This structure captures a pair of transposases (two shades of blue) with their DNA cargo (red and black) after the transposon jumped out of one genome. The pink protein segments are poised to unpeel the DNA when the transposon lands on another target genome. This conformation reveals an unexpected stability that may help develop new strategies to prevent the spread of antibiotic resistance. Courtesy O. Barabas. Courtesy Cell.

Based on the structure, Barabas and her colleagues predicted two types of molecular inhibitors. One peptide blocks the transposase protein from moving to its activated conformation. The second is a small DNA and binds to the open site within the transposon, blocking the DNA strand replacement needed for resistance transfer.

She envisions potential inhibitors may be used in combination with a course of antibiotics, to prevent resistance spreading.

Barabas grew up in Hungary, the daughter of two chemical engineers. She remembers being fascinated by how things in everyday life could be explained by chemistry and other phenomena people can’t normally see. When it came time to train for a career, Barabas decided to direct her imagination and creativity toward chemistry and basic research. Her father was concerned, reasoning that the country could not support many basic researchers.

At Eötvös Loránd University in Budapest, Barabas studied structural chemistry. For her masters, she crystalized small molecules used in drugs and pills, learning how their structure influences their actions and effects. Then she moved on to enzymes, looking at their effect on nucleic acid metabolism and maintenance. When she finished her PhD in 2005, she was riveted by how proteins juggle with DNA.

She crossed the Atlantic Ocean for a postdoctoral position at the National Institutes of Health in Bethesda, Maryland, USA and was introduced to transposons in the lab of Frederick Dyda. “I had no idea what transposons were, but they sounded fascinating—dedicated elements in the genome that fancy to hop around, shaping us into who we are,” Barabas says.

She became a group leader at EMBL in 2009. Over time, Barabas has become increasingly intent on connecting basic structural knowledge to applications.

“It’s important that we really use the structure to understand its function, and also develop it into something useful for society,” she says. “For me, the applicability of the acquired knowledge is critically important. Taxpayers pay us to have the most thrilling job, and I need to pay them back.” To help push past the basic discoveries, the Barabas lab does biochemistry, biophysics, structures, cell biology and other methods.

Collaborations abound. To explore how the antibiotic slaughter of gut bacteria affects their susceptibility to antibiotic resistance genes, she has teamed up with computational geneticists and a mouse biology lab, as well as with a clinician for human stool samples. This will allow investigating how transposons spread in microbial communities in the gut and what triggers induce the movements. More structures are on the menu to compare mechanisms among the many different transposons.