Cell biologist Tom Rapoport may be best known for studies of how proteins get in and out of a convoluted compartment inside cells called the endoplasmic reticulum (ER). But his personal backstory rivals his scientific achievements as a Howard Hughes Medical Institute Investigator at Harvard Medical School (HMS). His life has been intimately shaped by major political persecutions and social upheavals of 20th century Europe and America. Here’s the short version:

“My father was born in Russia into a Jewish family that emigrated during the Russian revolution to Vienna,” Rapoport wrote in a 2010 essay. “[In] the 1920s, [he] became a member of the Socialist party and later of the Communist party. He studied medicine and chemistry. While he was on a fellowship in Cincinnati, Ohio, the Nazis took over Austria and he could not return. In Cincinnati, he met my half-Jewish mother, who had emigrated from Nazi Germany and restarted her career as a pediatrician. I was born in Cincinnati, but 3 years later, in 1950, my parents became targets of the anticommunist campaign of Joseph McCarthy and returned to Europe, initially for a year in Austria. Because my dad was blacklisted, he could not find a job in Austria and we moved to East Germany, where he joined the faculty of Humboldt University in East Berlin. I was 4 years old when we arrived, and I stayed in Berlin until age 48.” In 1995, Tom and eight other members of his lab boarded a plane to Boston, where he has happily settled. He returns to hike in the Alps every year with at least one of his children.

Rapoport credits his parents for his interest in science. He recalls stimulating discussions at the dinner table. His success in the Math Olympiads enabled him to go to a special high school for math and science. He developed a love for chemistry, thanks in part to Linus Pauling’s General Chemistry. 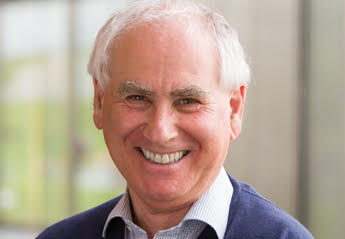 Rapoport attended Humboldt University on a special research program that combined undergraduate work with a PhD. East Germany’s PhD program also allowed two doctoral students to team up. Halfway through the seven-year program, he switched to biochemistry, putting him in an institute headed by his father. Rapoport ultimately earned two pairwise postgraduate degrees, but not before accidentally leaving a faucet on, flooding three floors of the institute, including his father’s office. His father made him renovate all of the damaged spaces.

The main publication in 1974 from his second doctorate remains his most-cited paper. The thesis, in partnership with Reinhart Heinrich, “described in quantitative terms the importance of an enzyme for the overall flux through a metabolic pathway and for the regulation of metabolite concentrations,” Rapoport recalls. The theory, now known as “metabolic control analysis (MCA),” was independently developed by another team at the same time and is lauded as an early contribution to the field of systems biology.

Moving to another institute in East Berlin, Rapoport became interested in protein translocation during a project to clone insulin mRNA. Fish, he learned, had larger Islets of Langerhans than mammals. On fish days, lab members lined up around a table to harvest the fresh carp parts they needed. (The rest of the fish was sold cheaply to grateful people lined up in front of the lab.) As part of that work, the group determined the first protein and gene sequences in East Germany.

Rapoport now wondered how a polypeptide’s zip-code like signal sequence is recognized by the membrane and how the polypeptide then moves through the membrane. With his students, Rapoport reported the first evidence that Sec61p forms the essential protein-conducting channel through the ER membrane for newly made proteins. Rapoport realized the similarities with the related bacterial SecY channel and proposed a unifying concept of protein translocation in 1994.

Science was difficult in East Germany, because of the isolation and lack of resources. When Rapoport made a rare trip to the United States, the FBI called each university host after he left to verify he was a “real scientist.” After the Berlin wall came down in 1989 and Germany was reunified in 1990, Rapoport suddenly found his grant applications funded in full. Yet, even the best and brightest East German scientists faced residual prejudices from their West German colleagues, who were now largely in charge at newly merged universities. Rapoport was denied a professorship at the new institution because of his past engagement in communist East Germany.

At Harvard, Rapoport continued to advance the field of protein translocation. In three main projects, his group has been working out how proteins cross into the ER membrane, how misfolded ER proteins are ejected back (“retrotranslocation”) into the cell cytosol for destruction (“ER-associated protein degradation, or ERAD”), and how the ER gets its shape. The ER is crucial for producing certain proteins and most of the lipids needed by other cell organelles. It occupies 10 percent of a cell’s volume and accounts for nearly half the membrane found in a typical animal cell.

While he insists much remains to be learned about ERAD in particular, Rapoport recently added a fourth project, the mechanism of protein import into peroxisomes, to attract students and postdoctoral fellows who want to make an impact on a less-studied biological problem. Peroxisomes are involved in energy metabolism and detoxification, and their malfunction results in serious human diseases.

“Every project has something to do with membranes,” Rapoport says. “My lab is known for using purified proteins and reconstituting a process with purified proteins. We start out with some murky cell biology problem – how proteins get across the membrane, how the shape of the membrane determines its function— and eventually understand it at molecular level.”

Shape of things to come

To learn these mechanistic details, the lab solves a lot of structures, often in collaboration with others. One highlight is the 2004 X-ray structure of an archaebacterial homolog of the Sec61p complex (with Stephen Harrison, a fellow Howard Hughes investigator at HMS). In a major result in 2016, they captured a structure of the active channel with a translocating polypeptide chain being pushed through. 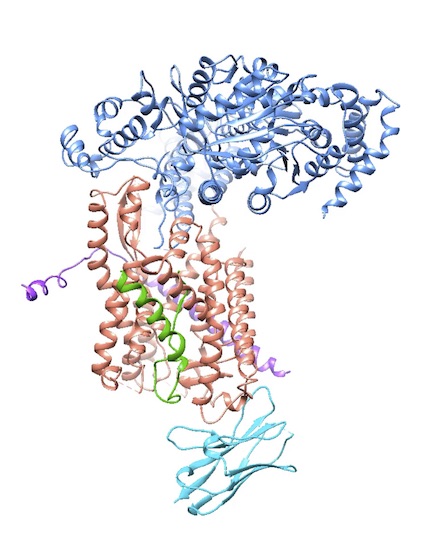 This crystal structure of the active translocon adds important molecular insights about how proteins are inserted into the channel to be ferried through the bacterial cell membrane. Here, the translocating polypeptide (green) is being pushed through the hourglass-shaped SecY proteinconducting channel (brown and purple) by the SecA ATPase (blue). The analysis was published in *Nature* in March 2016. Courtesy T. Rapoport.

For proteins that do not fold correctly in the ER and retrotranslocate back to the cytosol, Rapoport’s group is working on a comprehensive picture of the ERAD pathway in yeast. In 2017, electron microscopy (EM) gave them a first glimpse of how the crucial Hrd1 channel allows proteins to cross the membrane. Ideally, they will catch Cdc48 ATPase, with its ring-like structure, pulling a misfolded protein back through the membrane.

The lab has EM collaborations with Tom Walz at Rockefeller University, Maofu Liao at HMS, and Christopher Akey at Boston University and has recently built independent EM capabilities as well. In June 2016, Rapoport decided he wanted to do more lab work, starting with crystallizing molecules too small for EM analysis. He found it a breeze: One-third of his trays grew crystals. His philosophy is to tackle the biological problem first, being flexible about learning whatever method is required to answer the question.

Rapoport, who turned 70 in 2017, anticipates a thriving lab for at least another decade or so. In this, too, there is family precedence. After all, his mother finally passed her PhD oral exam at age 102 in 2015, 77 years after her thesis on diphtheria was labeled with a yellow stripe, as Jews would soon be forced to wear yellow stars on their sleeves, and her oral exam canceled.

Looking ahead to where cell biology is heading, Rapoport advises young people to go into organ-specific cell biology, rather than trying to work on the fundamental processes of his generation. “Every cell type in a higher organism has a particular biology,” he says. “Major discoveries will be made and will be more medically relevant than in the past.”