Antonina Roll-Mecak was an accomplished pianist when she moved to New York from Romania, but she came for the science, specifically to study chemical engineering at Cooper Union. “I loved math and music. Those two things were encouraged in my family,” she says.

Now Roll-Mecak is applying her mathematical mind to cell biology in an effort to crack the tubulin code. Tubulin proteins form hollow tubes inside cells called microtubules that provide cytoskeletal structure and also act as a highway system for cellular traffic. The tubulin code refers to post-translational modifications to tubulin that are thought to allow for exquisite detail in the coordination of activities such as transport and assembly. The “tubulin code” or “multi-tubulin” hypothesis is several decades old, but experimental proof for it is just now starting to emerge.

Microtubules rapidly self-assemble and disassemble in response to cues from the cell. Some last hours and others just minutes. “It’s responding in real time. We find that fascinating,” says Roll-Mecak, Unit Chief of the Cell Biology and Biophysics Unit at the National Institutes of Neurological Disorders and Stroke. “We’re trying to understand how modification enzymes and the motors that interact with these modifications fit into this highly dynamic network in the cell.”

Though Roll-Mecak is a cell biologist now, she loathed biology early on. “It was all by rote. I liked abstract things,” she says.

But when biology was presented in terms of molecules, she was hooked. She’d been considering medical school, with an aim to design medical devices, but during the application process she found her way into a lab doing molecular dynamics. She also attended a talk by structural biologist Wayne Hendrickson. It was her first introduction to X-ray crystallography. “I don’t remember what the protein was, but I thought, this is amazing,” she says.

She immediately redirected and began doctoral studies in structural biology at Rockefeller University. In the lab of Steven Burley, she gained a solid foundation in X-ray crystallography and solved the structures of eIF5B/IF2 and eIF2, essential GTPases involved in translation. IF2/eIF5B formed a chalice with the cup acting as a binding site for GTP and the foot binding the tRNA. Its structure was reminiscent of myosin, a motor protein. “To this day, I think it’s a very distinctive looking protein structure,” she says.

The work got her interested in motor proteins, which led her to the University of California at San Francisco for a post-doc in the lab of Ronald Vale, who studies macromolecular machines that act on the cytoskeleton. There, Roll-Mecak discovered a novel microtubule-severing enzyme called spastin.

She’d seen an enzyme like this before. Buried inside one of her textbooks during that pivotal molecular biology class at Cooper Union was an image of the first microtubule-severing enzyme, which had been discovered by Vale in the early 1990s. “It struck me back then as really cool, the ultimate nanomachine,” she says.

In 2010, Roll-Mecak started her own lab at the NIH, which provides the kind of stable funding needed to pursue long-term, high-risk projects like cracking the tubulin code. Just five years later, and the choice has already paid off. Roll-Mecak’s lab has begun to understand the logic behind some of the enzymes that write the tubulin code.

For instance, her lab has shown that tubulin acetyltransferase (TAT), an enzyme that labels the cylindrical insides of microtubules, can act as a slow clock for the lifetime of a microtubule. The work, which combines the static snapshot-oriented techniques of structural biology with the dynamic live imaging of single molecule fluorescence, provides a view, for the first time, of a protein cruising inside the microtubule lumen. 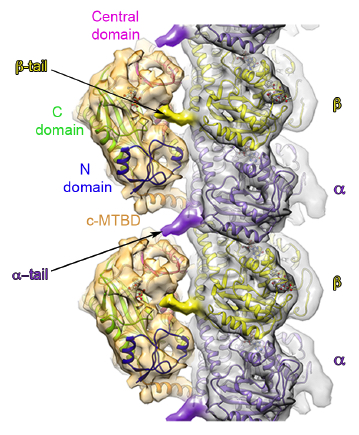 More recently, her lab used a hybrid structural approach of EM and X-ray crystallography combined with single-molecule fluorescence to visualize for the first time how another tubulin modification enzyme, a tubulin glutamylase (TTLL7), engages the microtubule by holding on to both C-terminal tails of tubulin. “Having SBGrid at our fingertips has made it possible to have a lab that uses multidisciplinary approaches,” Roll-Mecak says.

In addition, Roll-Mecak’s lab has succeeded in creating different flavors of human microtubules that have well-defined posttranslational modifications. Roll-Mecak’s lab can now modify the tubulin at will, making specific modifications, such as acetylation or glutamylation, and then probing to see how those changes influence interactions with microtubule associated proteins and motor proteins, such as kinesins, which walk along microtubules to transport cargo. “We are now trying to understand not only how the cell writes the code, but more importantly how the cell reads it,” she says.