When people see the results of blood tests that predict their risk for heart disease and stroke, they may exclaim “egads!”

Maybe they should say “DGAT!” instead, especially when they look at their triglyceride levels.

Triglycerides are the most common type of fat in the human body. The body makes them to store excess calories until they are needed. Triglycerides circulate in the blood, help transport cholesterol, and can cause hardening of the arteries. Belly fat and artery plaques are composed largely of the same triglycerides that helped ancient people survive winter without starving to death.

“Triglycerides are an efficient way of storing energy,” says Ming Zhou, a biochemist at Baylor College of Medicine in Houston. “We evolved to make enough of them, then it became a problem when we accumulate too much of them. Now we want to get rid of fat,” he says.

DGAT1 helps assemble triglycerides, a role that has fueled Zhou’s curiosity. After all, his laboratory concentrates on two families of membrane proteins—enzymes that synthesize fatty acids and lipids, such as triglycerides, and membrane transport proteins that traffic ions and small molecules.

In Zhou’s lab, graduate student Lie Wang and his colleagues determined the structure of the human enzyme (Nature, 2020). The finding provided a detailed understanding of what DGAT1 looks like and how it may work.

Diacylglycerol acyltransferase-1 (DGAT1) is an enzyme critical for dietary fat absorption and tricylglyceride synthesis. Human DGAT1 forms a homodimer. One monomer is shown in cartoon, and the other is shown in grey surface. Each protomer has a reaction chamber, in which the oleoyl-CoA substrate (spheres) binds and the active site (red star) is located. The location of the second substrate diacylglycerol (spheres) is hypothesized. Image courtesy of M.Zhou

“Fat absorption and storage is interesting,” Zhou says. “When people eat animal fat or plant fat, it’s first broken down into fatty acids in the intestines to facilitate efficient uptake. Then cells in the intestines assemble fatty acids back into triglycerides for efficient transport to different parts of the body and for storage. If you fast overnight and then eat a little fat—drink a cup of milk—triglycerides show up in the blood stream within 30 minutes.”

The lab has been working longer on another mouthful of an enzyme—stearoyl-CoA desaturase (SCD). Two versions of SCD in people perform a feat at body temperature that industrial oil refineries can do only at high temperature and high pressure: Put double bonds in an acyl chain to transform a saturated fat to unsaturated—in the case of SCD1 in people, to produce an unsaturated fat.

Cells need unsaturated fatty acids for proper function of their membranes, including those of interior organelles, such as endoplasmic reticulum and mitochondria.

“Most of the unsaturated fatty acids are harvested from the diet rather than from de novo synthesis,” Zhou says, but the human body can make a few unsaturated fats. The process is highly regulated.

His group solved a mouse SCD structure (Nature, 2015), but two zinc ions appeared to have snuck in from the cell culture, displacing the iron ions required for catalytic activity. A pair of iron atoms set the stage for the double bond formation by splitting an oxygen molecule to entice hydrogen atoms out of the fatty acid. 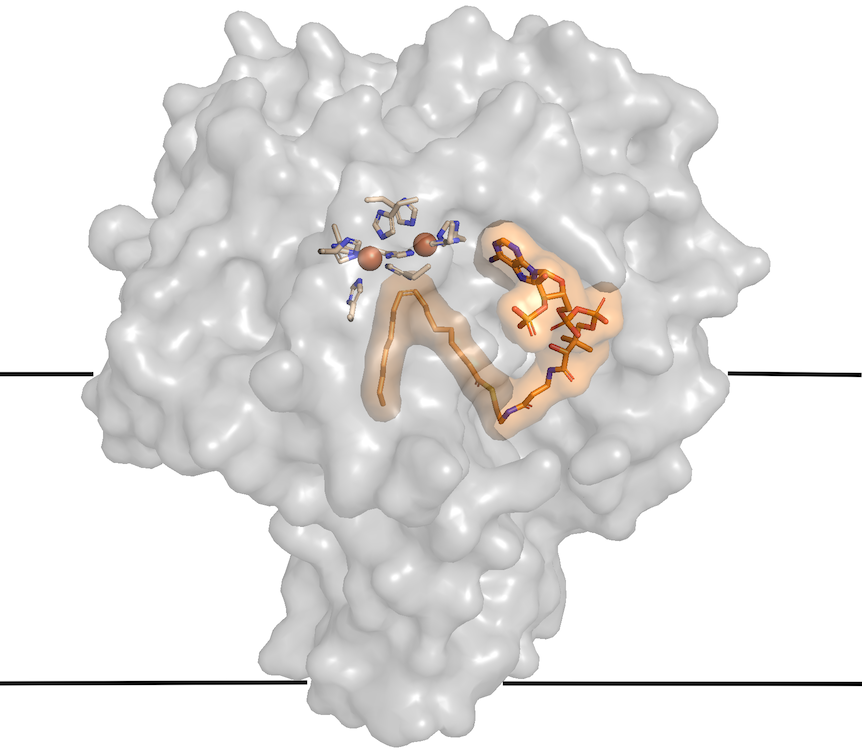 Stearoyl-CoA Desaturase-1 (SCD1) is a membrane-embedded enzyme with a novel diiron center. SCD1 catalyzes the formation of a cis double bond at the 9th position of a fatty acid. The protein is shown in grey surface, and the acyl chain of the substrate stearoyl-CoA (orange sticks) is enclosed by the protein and the 9th and 10th position carbons positioned close to the diiron center (orange spheres), which is coordinated by conserved histidine residues (sticks). Image courtesy of M.Zhou

Zhou’s group figured out a way to incorporate irons into the active site of SCD1 (Journal of Molecular Biology, 2020), and showed that the structures of SCD1 with zinc and iron are almost identical.

“We got to the first step of what the structure looks like and how substrate fits into active site, but the enzyme was not functional with misincorporation of zinc ions.” he says. “Now that we have iron ions in the enzyme, we can begin to understand how an oxygen molecule (O2) is split and hydrogen atoms extracted.”

To close the loop in the story, the fatty acid product of this reaction, with its newly minted double-bond, is integrated into triglycerides by DGAT1 and into membrane lipids by other membrane-embedded enzymes.

People may moan about these molecular mechanics putting their cardiovascular health at risk, but the Zhou lab sees opportunities for designing novel strategies to manage human dietary fat absorption and storage, metabolic diseases, and even cancer. Tumors gobble up fatty acids to make new cells. Blocking SCD1 could shut down cancerous growth.

Zhou grew up in China, the son of elementary school teachers. His father taught math and challenged him with math and geometry. His mother specialized in Chinese language and literature and encouraged him to read widely, a habit that remains with him.

These days, Zhou regularly supplements his scientific detective work with detective and mystery novels. Thanks to his teenage daughters, he also is catching up on English and American literature classics taught in grade schools. John Steinbeck has become a favorite. And books provide conversational fodder for their father-daughter walks on the neighborhood trail.

When Zhou was in grade school, math was an early favorite subject, but he gravitated toward chemistry in college. “I found it fascinating you can change things like that and understand the process to such a precise level,” he says. He graduated early from high school and entered Fudan University in Shanghai, China at age 16, choosing a biochemistry major after two years of general studies.

He came to the U.S. in 1996 for graduate studies at the State University of New York at Buffalo. In the laboratory of Anthony Auerbach, he studied acetylcholine receptor channels by single-channel recordings and kinetic analysis, mastering the patch clamp method, which attaches a glass pipette to cell membranes to record actions of ion channels.

In 1999, with a PhD in biophysics and physiology, Zhou moved to Rockefeller University for a postdoctoral fellowship in the lab of Roderick MacKinnon. The previous year, MacKinnon had caught the attention of the research community with the first structure of an ion channel, the bacterial KcsA potassium ion channel.

At the time, structures of membrane proteins were rare. Biologists used mutational studies trying to deduce the structures. Zhou spent a productive five years in the MacKinnon lab investigating the regulation of a potassium channel by a redox enzyme and learning production and crystallization of membrane proteins.

“With the structure of KcsA as a model,” he says. “we could come up with questions that were general and mechanistically relevant to potassium channels in humans. Rod is brilliant in identifying the questions and then finding ways to address them, and I have since been trying to emulate that talent in combining structure and function in my work.”

In 2003, MacKinnon won the Nobel Prize in chemistry for the work on potassium ion channels. MacKinnon had converted himself into a structural biologist to see the ion channels he was studying, Zhou says, inspiring other scientists to do the same.

In that context, Zhou joined the faculty at Columbia University in the physiology department, an unusual home for structural biology at the time, but the department chair, cardiologist Andrew Marks, also was gearing up to incorporate structural biology into his own lab’s research on ryanodine receptor channels.

“Structure determination of membrane proteins got a huge boost because the NIH allocated funds to tackle it systematically,” Zhou says.

“We hedged failure by trying many,” he says. When the lab succeeded, “in each project, the structures guided our inquiries into the mechanisms.”

Zhou’s research evolved with the field. He moved to Baylor College of Medicine in 2013 to focus on the more difficult and risky problems of human membrane proteins, with a focus on membrane-embedded enzymes. He also made the transition from X-ray crystallography to to cryo-electron microscopy for structure determinations. “We started with many enzymes and failed many times,” he says. The lab is pursuing a handful of successful projects in enzymes in more depth.

In a future direction, Zhou wants to learn how different lipids modulate enzymes. “It will require incorporation of different approaches—mass spectrometry, for example, with structural biology and functional studies—to learn how lipids and proteins interact. We will first find out what kind of native lipids bind to the proteins and then ask how lipid binding alters protein structure and function.”

In the short term, Zhou wants to understand another interesting aspect of fatty acid synthesis and transport. This one centers on bile acid transporters.

These biological questions provide fodder for meditation during Zhou’s daily lap swims at a community pool, an effective way to deter his own triglyceride and cholesterol buildup.