Like many of James Fraser’s scientific interests, his lab motto, “Beer and Tacos,” arises from baseball statistics. A sports writer invoked the beer-and-tacos analogy to describe the false dichotomy between statistical analysis—such as in the book and movie Moneyball—and traditional scouting by observation. It’s not an either-or scenario. The modern ball club—and scientist—needs both.

In the Fraser lab at University of California, San Francisco, the motto applies widely. It covers their routine practice of posting a preprint manuscript at the same time they submit a paper for publication. Online preprints speed results to other scientists, and traditional peer review can improve research quality and reach even more people months or years later. (Fraser personally mines the peer review literature daily to keep up with relevant discoveries.) While some argue for one or the other, the two systems, peer review and preprints, can co-exist, Fraser says in a science talk that made the New York Times: “‘It’s not beer or tacos, it’s beer AND tacos.’”

Fraser is equally inclusive about using structural imaging techniques to understand how various proteins move to interact, signal, and conduct the activities of life. His group is scheming on ways to move beyond the iconic static protein structure calculated by averaging the structures of thousands of copies of proteins in a crystal into a single electron density map.

“A single structure is a bad model of reality,” says Fraser, known as Jaime, an associate professor of bioengineering and therapeutic sciences. “Admittedly, it’s hard to create better models.” The ultimate model, he says, should actually be an ensemble of structures cataloguing the dynamics of how they behave on the job.

The Fraser team borrows techniques from X-ray crystallography, NMR, and cryo-electron microscopy and develops new methods to gather and to analyze the data. “We are figuring out ways, experimentally and computationally, to trick the sample into revealing more conformations,” Fraser says.

Normally, for example, data is collected from crystals flash frozen in liquid nitrogen. In a signature technique dating back to Fraser’s graduate school days, the lab instead collects data from crystals at room temperature. Lately, they have been analyzing data gathered at gradually increasing temperatures. The creeping warmth makes some crystalized proteins squirm or stretch, as their atomic parts allow. The Fraser lab can map out different protein poses created by the warmer environment. Their shape shifts reveal intrinsic mechanisms of how they function. A colleague’s lab uses electric fields for the same effect. 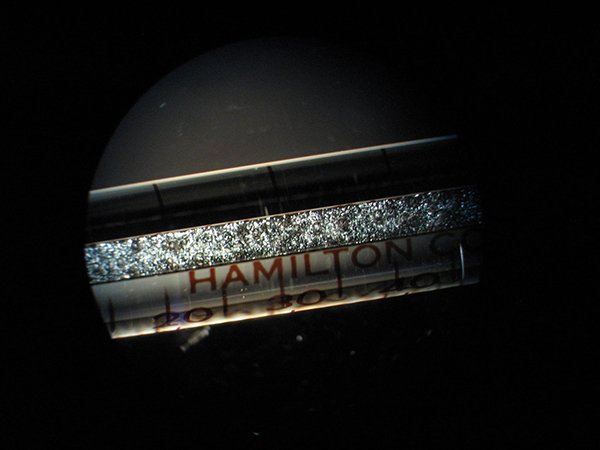 In traditional X-ray crystallography, the X-rays bombard one crystal hundreds of times. For a dynamic temperature experiment developed in the Fraser lab, this syringe shoots thousands of crystals into an X-ray-free electron laser beam, one at a time. Image courtesy of Alexander Wolff.

The technique can work for many types of proteins. Fraser compares the protein perturbations to automobiles. “Many cars use the same gas and drive at different speeds, because of the car, not the fuel,” he says. “We’re interested in how internal wiring of the enzyme sets the speed limit.”

In the process, they have learned how to slow down and speed up functional protein changes. In one collaboration with UCSF colleague William DeGrado, the techniques showed that water can rearrange itself in a membrane ion channel of influenza A to control a critical step in the viral infection cycle.

Going forward, Fraser wants to return to a previous interest in evolutionary biology. He wonders how mutations that are bad in one context, such as causing disease, can have a benign or helpful function in another context. He’s also curious how the structural underpinnings of proteins constrain the way evolution can act on the genetic sequence encoding them. He hopes to answer these questions by revealing conformational ensembles of different evolutionary intermediates.

Fraser remembers his high school years in Toronto, Ontario, Canada, in the mid-1990s as a fractious time when a right-wing conservative government was corrupting public institutions. He felt drawn to a career in politics, law, or public communications. He did well in math and science, but it did not become a passion until he ran gels in mini molecular biology classes taught by Angela Vavitsas, learning the joy of both the tactile work and the connection to the great unknown.

Inspired, he applied to college science programs. At McGill University in Montreal, Canada, he minored in theology, first drawn to the handsome building with the campus’s best library and then by the chance to stretch his writing muscles and surround himself with people who thought differently from him.

Graduate school at University of California, Berkeley, plunged him into “hard core” structural biology and biophysics. As he was finishing, he had an opportunity to start a small lab directly out of graduate school across the bay at UCSF. A year later, the fellowship converted to a tenure track position.

This all looks great on a CV, but Fraser contends the best preparation for a career in computational biology and data analysis is—you guessed it—baseball statistics. At UC Berkeley, the devoted Toronto Blue Jays fan was a teaching assistant to a freshman class that was based on the fact that baseball wonks and genome analysts use identical methods in their work. Few other jobs can count their fantasy baseball competition trash-talk as professional development.