Deb Kelly gets a lot of scientific mileage out of her dog Annie. Most mornings, they take long runs together in the rolling countryside near her Pennsylvania State University laboratory. Along the way, ideas for new experiments percolate. Some are “rather unconventional,” Kelly says, but her students often agree to try them.

Annie also helps Kelly explain her research to others. The Kelly lab wants to understand exactly how damaged tumor suppressor proteins go wrong in cancer. How does their behavior differ from the healthy versions? And what can be done about their cancer-prone ways? Kelly and her colleagues develop new technology to answer these questions and more.

One of their innovations is making a splash in the electron-microscopy (EM) field: Direct imaging of molecules swimming in liquid at room temperature. In contrast, cryo-EM samples are cooled to -180C degrees. Unlike the frozen atomic snapshots, liquid-EM aims for live-action imaging to watch proteins meet and greet.

The science is hard, but the concept of liquid-EM is simple. To explain, Kelly shows a photo of her dog Annie, sitting still while surrounded by the Pennsylvania snow. A static image reveals a lot of structural details down to individual whiskers. But from the picture alone, you may not guess Annie can swim, says Kelly, who then shows a video clip of the Australian Shepherd paddling around a pond.

Similarly, a three-dimension molecular structure derived from a molecule frozen in place can strongly hint at certain interactions. But “you never know all the intricate movements of the specimen, unless you are gathering dynamic information to see all these bits and pieces move,” Kelly says.

“I think everyone's goal in structural biology is not just to get the higher resolutions of structures, it's knowing the mechanism behind how things work,” she says. “By having molecules enclosed in liquid, you can make dynamic observations as well as structural observations at high temporal and spatial resolution. You get a bigger picture about how things look and operate mechanistically.”

Ultimately, Kelly wants to plunge her cancer proteins into her new liquid-EM preparation. But to develop the tools, her group has deployed well-studied viral particles as test cases. They pivoted to SARS-CoV-2 when the pandemic hit.

In fact, even as she and her colleagues fine tune the liquid EM technology, they aspire to the next phase: High-resolution EM imaging of viral particles suspended in air to capture details of the airborne transmission of COVID-19 and other infectious respiratory diseases.

“We’re starting to develop this nice industry umbrella with other partners and pharmaceutical companies to understand how real-world therapeutics are affecting viral pathogens,” Kelly says. “These operations could be applied to lots of different pharmaceutical antibody drug conjugates or antibody therapeutics. You could test antivirals with how they're associating with different entities or different proteins.”

The lab’s long-standing cancer research focuses on two of the most well-known genes—BRCA1, associated with high-risk mutations for breast cancer passed through families, and P53, which goes wrong in about half of all cancers. Despite their extensive medical infamy, little is known about how the mutated genes malfunction and how those glitches promote cancer.

The research begins with proteins taken directly from the cancer cells of patients to stay as medically relevant as possible and recapitulate activity from the tumor microenvironment.

Kelly believes a real time video of a working molecule swimming in liquid will tell a fuller story, but until then the bulk of the lab’s structural biology work involves frozen samples and the cryo-EM techniques that have spurred so much progress in the last decade.

One of the lab’s early technical innovations took the form of new cryo-EM microchips. Called Cryo-chips, they have a silicon nitride surface found in computer processors instead of the usual carbon EM chip surface. Designed in collaboration with Protochips Inc., an industry partner, the chips enable Kelly’s team to quickly isolate and tether native protein assemblies that are otherwise difficult to purify and image.

In a study of BRCA1, the researchers found a mutated cancer protein slightly truncated. The imperfect BRCA1 apparently was too much for stressed-out cells already struggling with the hormone surges of youth, so the cells naturally added degradation tags known as ubiquitin to get rid of it. Yet, additional experiments showed, a truncated BRCA1 can still do its tumor suppression job, the researchers discovered when they added a ubiquitin-cleaving drug to avoid destruction of BRCA1 in those samples (Science Advances, 2017; DNA Repair, 2019).

“We can restore its functional capacity by 20 percent by just removing that tag with an enzyme that says, ‘Hey, stick around,’” Kelly says. “And then it just kind of does its job and the cells don't freak out.”

Using Cryo-chips, Kelly and her colleagues are also working to resolve the first full-length, three-dimensional structure of p53 (Analytical Chemistry, 2020). They similarly noticed many ubiquitin binding sites on p53, so they are exploring if the same drugs that restore mutated BRCA1 will also work for P53 in pancreatic cancer.

“A lot of these different life processes in different cells function with the same general principles of ‘I'm freaking out, let me destroy things by ubiquitination,’” she says. “If you're able to tweak these distress signals, or modulate those stressful events, cells can have a more chill approach.”

As a child, Kelly was more interested in outer space than inner space. She grew up in the era of big NASA projects in space exploration. In school, she pored over astronomy pictures in the science magazines her mom bought her. She imagined what could be seen with telescopes. She excelled in math and physics.

At Old Dominion University in Virginia, she orbited a chemistry major until she felt the irresistible pull of applying math to biology. She also played tennis, but gave it up when practice time overlapped with chemistry lab, and she didn’t think her knees would hold up to the rigors of collegiate competition. Fortunately, she was on an academic scholarship, not athletic.

After graduating, she worked for a few years as a research assistant at a nearby medical college. Then she moved to Florida State University in Tallahassee to pursue her PhD in molecular biophysics in a program that grew out of a cold-war era research effort in radiation biology. There, she learned cryo-EM.

Next, she trained as a postdoctoral fellow in the cell biology department at Harvard Medical School where she discovered the cancer research questions that animate her lab now. Such as: How do genetic mutations in BRCA1 kill young women? And: Why has no one been able to look at these proteins in high-resolution detail?

“We’ve had to invent new technology to get us to the point where we can start to answer the questions,” Kelly says.

In her first faculty position at Virginia Tech Carilion Research Institute, Kelly teamed up with Madeline Dukes, an applications scientist at Protochips Inc. based in Raleigh, North Carolina. They started doing experiments together, her faculty career and the company growing together, in an ongoing partnership.

In fact, Protochips was one of the first developers of liquid-EM for close scrutiny of materials science samples. The flat, hermetically-sealed sample preparations fit inside the vacuum chamber of an electron microscope.

In 2019, Kelly moved to Penn State University. The life sciences and materials sciences labs occupy the same building, use the same equipment, share expertise, collaborate, and push EM structural imaging to answer new questions. It all gives Kelly access to the highest level of technology and expertise she has ever experienced.

To continue her liquid-EM work, she turned to adenovirus vectors, a well-studied system. She teamed up with a colleague, Susan Hafenstein, who studies them as a vaccine design platform. In fact, Kelly was in Italy at a Gordon conference in liquid phase electron microscopy a week before it shut down to contain the spread of COVID-19, two months before the pandemic was declared.

When she returned to the lab, her team applied their new technology to SARS-CoV-2. Graduate students Maria Solares and Samantha Berry learned how to isolate non-infectious virus from deactivated serum of COVID-19 patients. They are studying virus particles in liquid and then in cryo-EM for comparison. The same approach has provided new insights for individual SARS-CoV-2 proteins in recent work by former post-doctoral fellow Michael Casasanta, and graduate student Liam Kaylor.

“The first high-resolution observations of a virus completely contained in liquid was our AAV structure, a famous gene therapy vector turned COVID-19 vaccine candidate” says Kelly. Graduate student GM Jonaid is first-author (Advanced Materials, 2021). The same tools are now being used by the team to study SARS-CoV-2 variants in liquid, as they would be maintained in the body. 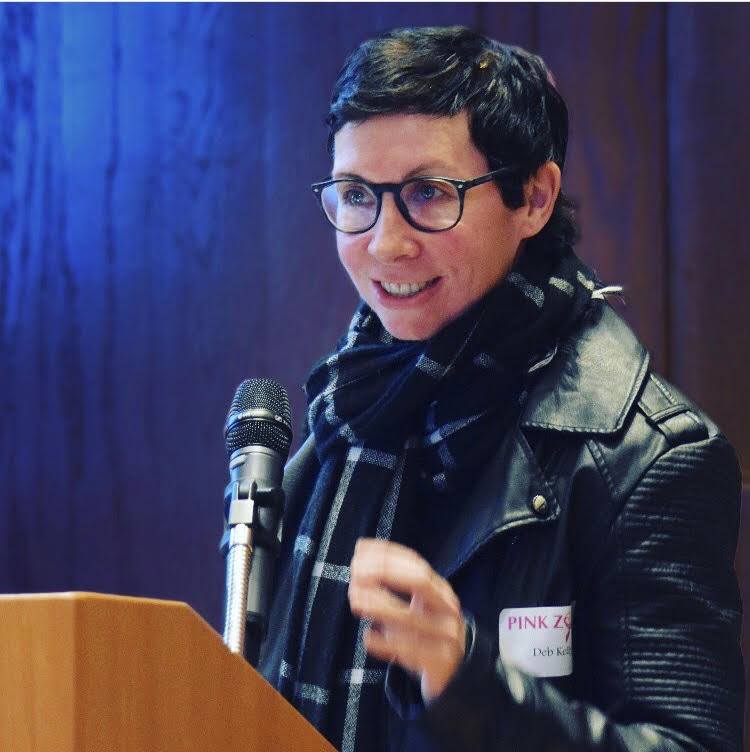 A different Titan electron microscope in the Materials Research Institute at Penn State is outfitted with an aerosol system to view SARS-CoV-2 in its infectious habitat. “We plan to watch aerosol droplets containing viruses live in the electron microscope,” Kelly says. These imaging experiments can be performed at different atmospheric flow rates to mimic sneezing, coughing, and talking, while seeing them landing on cells.

“I'm really excited about the potential to look at viruses in real world scenarios as they would be in liquid or in atmosphere,” she says.

Less than a year after moving to Penn State, Kelly was elected president of the Microscopy Society of America, a three-year commitment that began January 2021 as president-elect, then president, then past president.

She still loves playing tennis and has her sights set on a second run of the Chicago marathon.