In early 2016, Jochen Zimmer published a series of structural snapshots of molecular machinery during different stages of assembly and secretion of cellulose across the cell membrane. The series of images reveals a two-part system; one part of the machinery repeatedly adds on to the polysaccharide and another, a helix that acts as a lever, advances it. Zimmer, an associate professor of molecular physiology at the University of Virginia, even engineered a minuscule tether to tie back the lever to verify that this would, indeed, stall the transport process.

The work is part of a collection of studies in Zimmer’s lab that focus on figuring out how cells build and secrete polysaccharides. These sugar molecules are the building blocks of all kinds of things in nature, from plant fibers to bacterial biofilms to vertebrate soft tissues. “What is really distinct about the polymers we are looking at is that they are being made and secreted by the same protein,” says Zimmer. 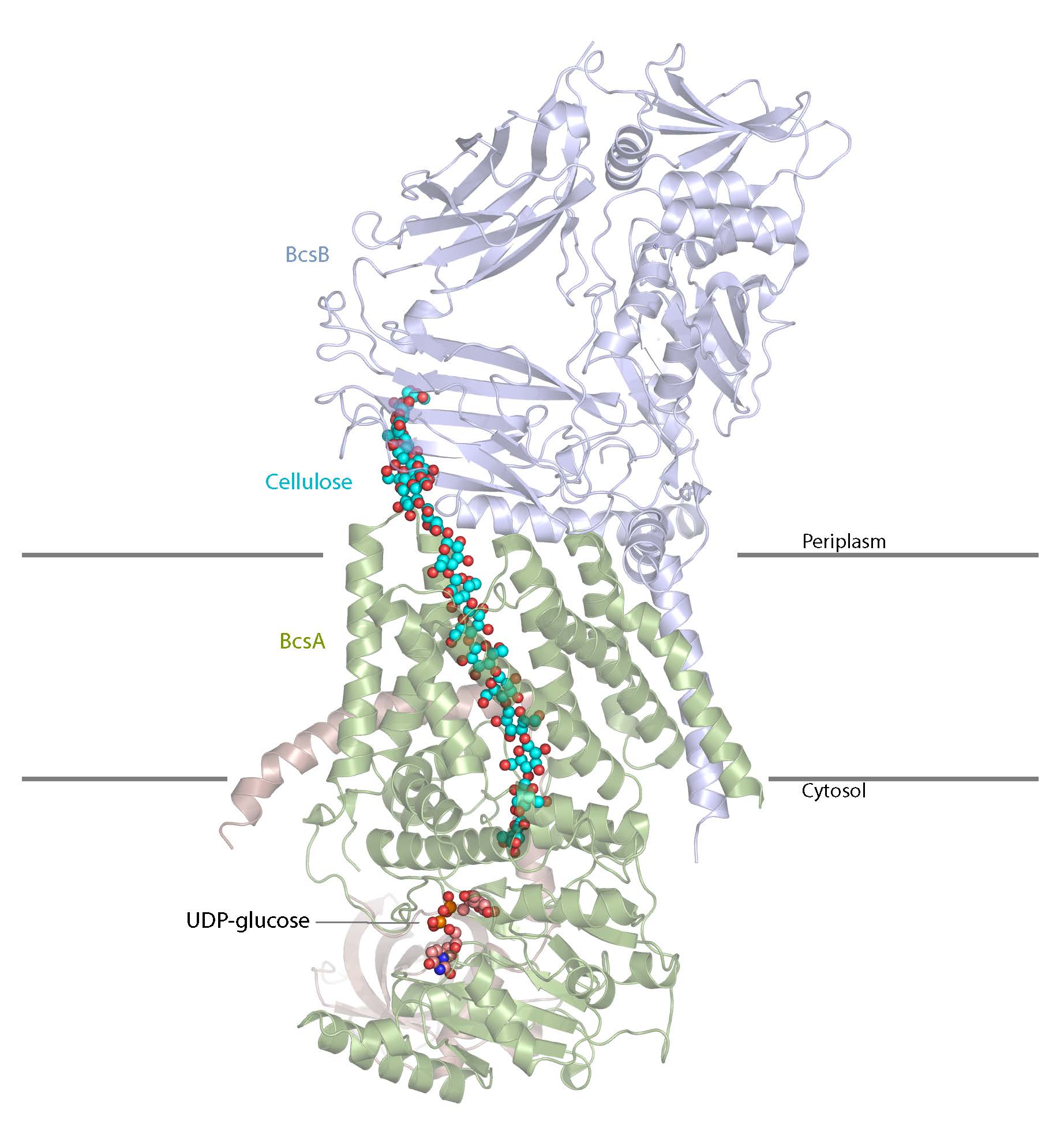 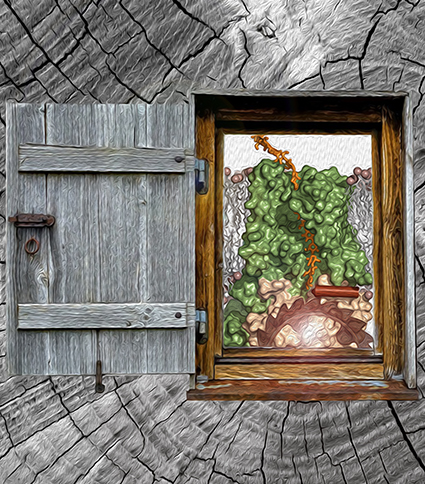 A traditional (top) and artistic (bottom) rendering of a single molecule that assembles and secretes the polysaccharide cellulose across the cell membrane using a helix that acts a bit like a water-wheel and lever to add glucose proteins onto chain and advance it into the membrane.

Zimmer uses X-ray crystallography to do basic research into the molecular mechanisms of membrane transport. But his findings could have practical applications. For instance, his investigations into the production of bacterial cellulose could point to new ways of breaking up biofilms, which cause drug resistant infections.

The work could also suggest new ways to synthetically produce polysaccharides used in biofuels and health applications. For instance, the polysaccharide hyaluronan is used in lotions, therapeutics for joint ailments, and surgical materials and produced, in some cases, through extraction from rooster combs. “If we were able to make polymers that have a set length and well defined physical properties, that would be of great benefit,” he says.

A combined interest in chemistry and nature led Zimmer to study biochemistry at the University of Bayreuth in Germany. He got his first introduction to structural biology at ETH Zurich during a summer lab rotation with crystallographer Tim Richmond. It was Zimmer’s first experience seeing a protein molecule. “From there, I was set on crystallography,” he says.

During that Master’s program at ETH, interesting findings were coming from the field of membrane biology, such as Nobel Laureate Roderick McKinnon’s structure of a potassium ion channel. “Everyone was talking about it,” says Zimmer. “What I still really like about membrane proteins is that these structures speak to you. Quite often, you can almost immediately predict how it might work.”

Zimmer earned his doctorate at Oxford University in the lab of Declan Doyle, who had trained under McKinnon. He then completed a post-doc at Harvard Medical School in the lab of cell biologist Tom Rapoport. His work combined a previously solved structure of a membrane channel with a motor protein to reveal how the molecular engine pushes a protein through a channel across the plasma membrane. Nature selected the paper as a research highlight of 2008.

When Zimmer set up his own lab at UVA, he decided to focus on polysaccharides, which are found widely in nature. Cellulose itself, says Zimmer, “is boring. It’s just glucose molecules lined up.”

But it is also the most abundant polymer on the planet and is involved in plant structure, which is of interest for biofuels, and bacterial biofilms, which are of interest in medicine. “It’s a pressing topic,”’ he says.

Zimmer’s work building a series of snapshots of the cellulose synthase in action is the culmination of efforts begun when he joined UVA’s Center for Membrane Biology in 2009. “We have a nice movie that runs through the states and shows how these enzymes add glucose molecules to the polymer and push it into the transmembrane channel,” he says.

The findings could be used to find ways to interrupt the production of bacterial biofilms, but for now Zimmer’s focus remains on fundamentals. He is now looking at how plants produce cellulose. Plants create nearly two-dozen different cellulose polymers that spontaneously wind together into cable-like fibrils that support the plant’s weight. “This means you have to have about two dozen cellulose synthases in close proximity to one another. Each produces and secretes a different cellulose polymer that aligns to form a fibril,” says Zimmer. “We are starting to assemble these complexes in vitro for structural and functional analysis.”