As an undergraduate at University of Montpellier in France in the early 2000s, Sébastien Granier’s interest in science was stoked by the passionate lectures of a renowned plant physiologist who studied the architecture of trees, and tropical forest canopies in particular. Soon his attention was drawn to the dramatically scaled down world of G-protein coupled receptors (GPCRs) and their crucial role in cell-to-cell communication and human health.

Granier has been riveted by GPCRs ever since. The family of receptors scattered in cell membranes throughout the body detect a staggering range of signals outside the cell and deliver them inside to G proteins or other signaling molecules, such as arrestins, that prompt varied responses from different cells, such as seeing light or reacting to allergens.

“GPCRs regulate all our physiology,” says Granier, senior researcher at INSERM. “Because of that, they are extremely important for drug development.” In fact, more medicines approved by the US Food and Drug Administration act on GPCRs than any other drug target.

For his PhD in chemical biology and biochemistry, Granier probed the interactions of intracellular signaling proteins with a GPCR that triggers an increase in water reabsorption from the kidney, called the vasopressin type 2 receptor. On his CV, a series of Nature papers trace Granier’s subsequent journey—his postdoctoral studies of opioid receptors at Stanford University, starting up his own lab at his Montpellier alma mater, back to Stanford and opioid receptors for a sabbatical, and then his Montpellier lab’s recent discovery about adiponectin receptors, a possible target for drugs to combat insulin resistance in obese people with type 2 diabetes.

As a postdoc at the Stanford lab of Brian Kobilka, Granier came face-to-face with the daunting challenges of attempting to conduct structural biology on a GPCR. For all their importance, GPCRs are scarce on the surface of cells. Also, the molecules are floppy and unstable, and the fatty membrane parts resist forming tidy crystal lattices. “These proteins are extremely hard to remove from the cell membrane in a functional form,” he says. “Not only are they difficult to purify, but they are hard to crystalize.”

How hard are GPCR structural studies? It wasn’t until 2000 that the first high-resolution three-dimensional crystal structure of a GPCR was published, detailing rhodopsin in its inactive state. Then it took seven more years to produce the first crystal structure of a GPCR bound to a diffusible ligand, the b2-adrenergic receptor (a receptor for epinephrine), this one published by the Kobilka lab in 2007, during Granier’s second and final postdoctoral year.

Armed with valuable experience in purifying GPCR for structural studies, Granier obtained a tenure track position at INSERM to work in the Institut de Génomique Fonctionnelle in Montpellier. The stage was set for success, with a dynamic local GPCR community and access to crucial tools of the trade—nuclear magnetic resonance (NMR) spectroscopy and electron microscopy (EM), not to mention the synchrotron in Grenoble. But Granier encountered a new struggle. He could not secure sufficient funding for his research. He limped along on a grant to study glutamate, a different kind of GPCR.

In 2010, he returned to Stanford as a visiting associate professor in the department of molecular and cellular physiology. There, among other projects, Granier picked up his opioid receptor data and began working to solve a three-dimensional structure. The move paid off.

Opioid receptors have been relieving pain for thousands of years, but the atomic details had been shrouded in mystery. In 2012, Granier and Stanford graduate student Aashish Manglik solved the first high-resolution crystal structures of two opioid receptors, the main receptor Mu and a related Delta receptor, in their inactive states. In the same Nature journal, another group reported structures of the two other opioid receptors. (Later that year, Kobilka won the 2012 Nobel Prize in Chemistry with his former advisor Robert Lefkowitz for groundbreaking discoveries in GPCR.)

The long-awaited crystal structures of all four opioid receptors provided the first direct evidence showing how opioids bind to their receptors, contributing crucial information in the search for opioid drugs without the unwanted side effects, such as fatal respiratory suppression. Interestingly, a wide opening in the Mu receptor allows easy access to the opioid binding pocket, perhaps explaining why opioids are so potent and why their effects, including heroin overdoses, are rapidly reversible. A follow-up structure-based discovery campaign to develop safer opioids identified PZM21 as both a potential drug candidate and experimental tool to find other safer opioids.

Granier returned to Montpellier, intent on learning how the opioid receptor moves from an inactive to active conformation. Using NMR spectroscopy, his lab reported in 2015 the shape changes of a Mu receptor activated with a morphine-like drug (BU72). They watched it signal via a binding pocket for a G protein (Gi) that triggers analgesia and sedation as well as euphoria and physical dependence. Depending upon the drug, Mu can also signal another protein, arrestin, linked to tolerance, respiratory suppression, and constipation. In a companion paper, the Kobilka lab published a high-resolution structure of the drug bound to the activated Mu receptor.

Meanwhile, Granier became interested in adiponectin receptors after a Japanese group showed that a small molecule could activate the receptors for to increase insulin sensitivity in an obese mouse model. Then, the same group published structures of two adoponectin receptors in their inactive state. Like all GPCRs, one structure cannot tell you enough about how it works, says. Granier was able to follow his curiosity, thanks to a generous “excellence” grant from the European Research Council (ERC), given to young researchers purely on the quality of their work.

Adiponectin appears to protect against the health consequences of obesity, such as insulin resistance and heart disease, by breaking down ceramidase into friendlier components. In April 2017, Granier’s lab demonstrated the human AdipoR2 functions as a ceramidase catalyst. “To our surprise, we observed a free fatty acid inside the receptor,” Granier says. Inside the cell, the activated receptor forms a tunnel with a zinc element buried in the membrane that enables the ceramidase activity. Granier reanalyzed the AdipoR1 data from the Japanese group and found a more accessible large opening in the transmembrane domain with a different conformation from the AdipoR2. Because AdipoR1 also catalyzed ceramidase at the behest of adiponectin, the data suggest that these receptors undergo conformational changes during the catalytic process. 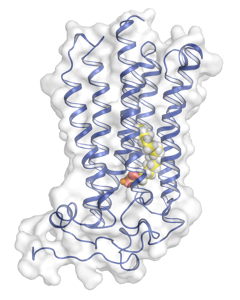 Next, Granier wants to understand in more detail how adiponectin binds and activates the receptor. He is approaching the problem from several directions, with crystallography and EM, supplemented by computational approaches and biological assays. He is also working on the opioid receptor, looking at how it couples specifically with different G protein subtypes.

Working on GPCRs hasn’t gotten any easier. “It’s a trial and error process,” he says about the many steps in purifying proteins that can go wrong. “There is interesting information in negative data,” he says, but “it’s nice to be able to succeed on challenging and extremely hard projects that can fail.”