One day, a recently retired colleague visited S. Ramaswamy in his University of Iowa laboratory and presented him with a fish from a Canadian lake and a question. Why was the fish blue? Normally, North American walleyes are golden yellow, but more seem to be turning blue in summer months.

The unexpected question hooked Ramaswamy, who goes by Rams, even though it had nothing to do with his core research program. But he places a high value on curiosity-driven research. “That has been the key to a lot of the work in the lab,” says Rams, whose most famous extracurricular research probed embryonic cockroach milk crystals (more on that later).

In the case of the curiously blue walleye, the Rams lab embraced the project with structural and spectral experiments on the blue pigment protein complex. They documented a small new fluorescent protein (sandercyanin) with unique far-red reflective properties. In the fish, the outer pigment layer may act as a protective sunscreen to absorb excess damaging UV radiation let in by the Arctic ozone hole, reported the Rams team and their collaborators in 2016 in PNAS.

Rams grew up in Southern India. He started his scientific career there as a physicist, with a masters degree in electronics. Like the fish, structural biology appeared to him out of the blue. In this case, it was a lecture on protein crystallography in the 1980s. The idea that the position of atoms could explain how proteins work made sense to him. After all, that’s how computer chips were designed (atom by atom). And only a handful of structures had been determined, making it a field with great potential.

In another bit of luck, he found a PhD supervisor setting up his own lab in India after being freshly trained by Purdue University structural biologist Michael Rossmann. After his PhD at the Indian Institute of Science in Bangalore in 1992, Rams left for a postdoctoral fellowship at the Swedish University of Agricultural Sciences and stayed on as a researcher in Uppsala.

A collaboration with University of Iowa (UI) turned into an invitation to set up an X-ray crystallography program there. In 2000, Rams moved to Iowa. Over the next 10 years, he added nuclear magnetic resonance (NMR) and electron microscopy facilities—and acquired a new last name, in the tradition of earlier generations of new U.S. citizens. 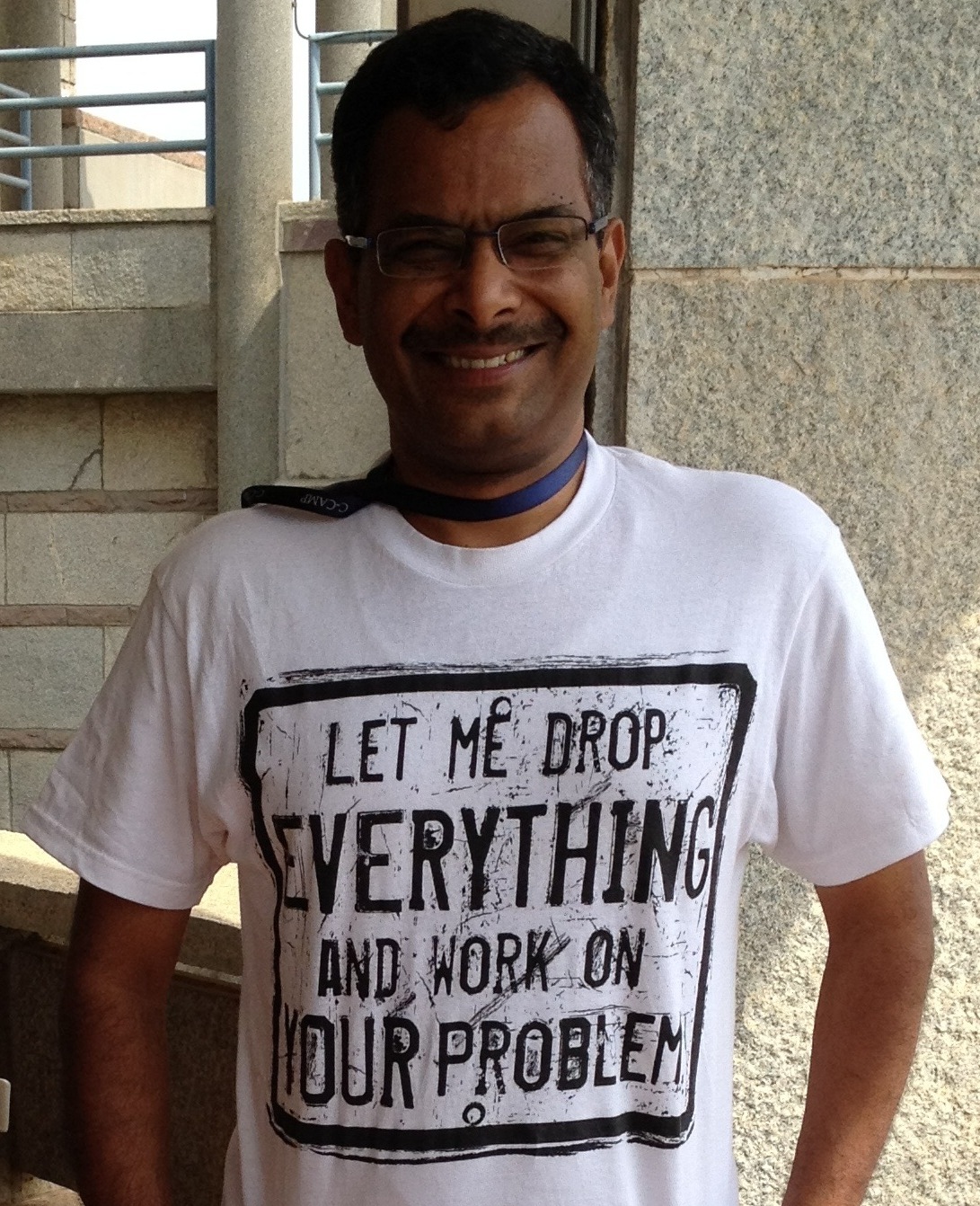 He had been known as S. Ramaswamy, with S. standing in for the first initial of his father’s last name and Ramaswamy, his given name, serving as the reference name in journal author credits. But to become a U.S. citizen, “S” was rejected as a stand-alone name. Expediently, he expanded it to Subramanian and made it his new surname for legal purposes.

In 2009, Rams returned to Bangalore to set up the Institute for Stem Cell Biology and Regenerative Medicine (InStem). He has maintained his faculty position and collaborations in Iowa (traveling back several times a year at first). In India, he continued his structural biology research, setting up a suite of tools and facilities, including X-ray, NMR and cryo-EM.

In Bangalore, he also co-founded the Center for Cellular and Molecular Platforms (C-CAMP) and served as chief executive officer until 2016. India’s first large biotechnology incubator, the center paired start-up companies with the problem-solving abilities of a strong academic institution. A new idea there at the time, Rams says, the center supported 50 companies by the time he left the helm.

In May 2019, Rams will move back to the United States, this time to Indiana to direct the Bindley Bioscience Center at Purdue. There, he will be answering the question, “What are new fun things one can do at the intersection of biology and data science and engineering?” His structural biology lab will be moving more into cryo-electron microscopy to elucidate enzyme activity in larger protein complexes.

“One thing that makes structural biology special is the dramatically collaborative way by which methods have been developed and software not only developed but made available and integrated,” Rams says. “It’s very special about this particular community. It’s been an important part of my scientific work.”

The core research in the Rams lab revolves around the exquisite details of how enzymes transfer electrons that enable oxygen’s fundamental role. His research in mechanistic enzymology of non-heme metal enzymes explores how iron and other metals catalyze reactions outside of the well-known oxygen-carrying iron atom in hemoglobin.

“When [life on earth] went from being anaerobic to aerobic, the trick was to utilize oxygen,” says Rams. “It’s all about electrons. It’s all connected to that one or two electrons going from iron to oxygen and making oxygen reactive to do the things that chemistry cannot do otherwise. This was a primary switch between anaerobic and aerobic.”

Early, his lab determined crystal structures of dehydrogenases, a liver enzyme that begins to detoxify alcohol in the body. In Iowa, he became interested in infectious diseases. In 2003 in Science, his lab reported a crystal structure of a new way that nonheme iron enzymes activate oxygen in the enzyme naphthalene 1,2 dioxygenase. They showed how the enzyme manages the critical step of in catalyzing the stereo-specific cis-dihydroxylation reaction consistently and correctly. (Stereo specific refers to selecting one molecule over its mirror image, also known as handedness.) Another program advances our understanding of the molecular mechanisms of sialic acid uptake by gram-negative bacteria and help lay a foundation for finding new targets to overcome antimicrobial resistance.

Since moving to India, he started work on nucleotide sugar transporters, proteins in cells that move sugars from the cytosol to the endoplasmic reticulum and golgi in cells. His team raced to determine the first structure, but they were scooped by another group. They continue to work on it, “as there is a lot more to be done to understand on how these transporters work,” Rams says. The work is a collaboration with the laboratory of Jeff Abramson at University of California, Los Angeles, a former colleague of Rams at Uppsala. 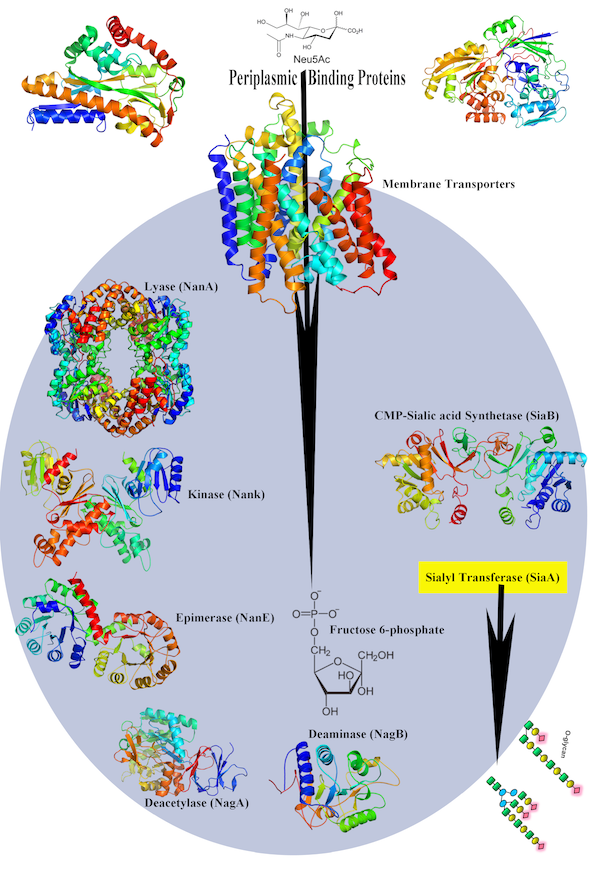 These structures show the molecules in bacteria that scavenge 9-carbon sugars and use them in metabolism. In this project, the Rams lab collaborates with Rosmarie Friemann at Gothenburg University and Ren Dobson in New Zealand.

Meanwhile, another curiosity-driven project had skittered into the Rams lab. In 2006, the UI campus hosted the largest collection of the world’s cockroaches. The collection included the Pacific Beetle cockroach, commonly found in Hawaii and the only species known to give birth to live young. Small crystals in the gut caught the attention of an undergraduate student in the Rams lab, who also worked in the cockroach lab of Barbara Stay. He ran them through the X-ray beam and discovered they were protein crystals.

The tiny crystals eluded several early attempts to determine their structure using X-rays and NMR, but eventually the Rams lab and their collaborators determined the structure of the cockroach milk crystals. Pound for pound, the milk crystals have times the energy of the same mass of dairy milk. In the mother cockroach, the concentrated milk crystals nourish 9-12 developing embryos.

“It took us 10 years, but this structure was a feat,” Rams says. The team used single-wavelength anomalous dispersion (SAD) to gather data on the mixed protein crystals.

After they determined the structure, the Rams lab synthesized the gene and grew the protein crystals in yeast for further study. “This could be an excellent source of nature-inspired high-energy food,” he says.

The study, published in the July 2016 journal for the International Union of Crystallography, is believed to be the first report of a detailed structure from a crystal naturally grown in vivo rather than in vitro from overexpressed proteins. But it won’t be the last. Rams says a new area of research, in vivo crystallography, has emerged to study nature’s crystals, a tool functions in health and also a byproduct of some disease processes.

In fruit flies, for example, certain protein crystals found in the blood cells at a specific stage of development allow the embryos to survive. In another interesting example, ”nature has used crystallization as a mechanism to help protect and store highly concentrated proteins in seeds, and this has been well documented,” Rams says. “But, how these crystals are packed and what makes these proteins crystallize in a very heterogenous environment is yet to be understood.”

Rams is a foodie who likes to cook and eat the local vegetarian cuisine wherever he lives, but he hasn’t tried the milk crystals, either from cockroaches or yeast. However, he jokes that if someone made a high-protein beer from those yeast, he would consider tasting it.