For sports buffs, the end of winter ushers in a new season of competitive delights. Alan Brown’s spring thoughts turn to Formula One and the pre-season test runs of new designs and rampant speculation among fans about which cars will have the edge in the coming months.

Brown’s lab functions as a kind of reverse pit crew. “We’re really trying to understand how cilia move and how their motors are coordinated,” he says. They also want to understand cilia’s other roles in sensory perception and developmental signaling, which go awry in some human conditions.

From a molecular point of view, cilia may be as much monster truck as they are high-performance race car. For example, the cilia’s central cytoskeleton, called the axoneme, is one of the bigger molecular machines in nature.

The axoneme of motile cilia is the largest macromolecular machine of eukaryotic cells. The collaborating labs of Alan Brown and Rui Zhang started with an axoneme of an algae, Chlamydomonas reinhardtii, and found 38 associated proteins, including 33 microtubule inner proteins associated with doublet microtubules. Video credit: Veronica Falconieri Hays, Falconieri Visuals

Brown’s team lifted the hood on some details of the gigantic axoneme backbone in an October 2019 paper in the journal Cell in collaboration with the lab of Rui Zhang at Washington University in St. Louis. Using cryo-electron microscopy (cryo-EM), the teams reported the atomic details of a complicated structure of 451 proteins.

They started with the mobile kind of cilia from green algae. Imagine a single hair filled with tens of thousands of tiny molecular motors.

Scientists already knew that a cross section view of the axoneme shows a ring of nine doublet microtubules made of the namesake protein tubulin. The new study revealed an additional 33 proteins on the inside of each microtubule and resolved five of the many proteins on the outside. Inside and out, the proteins have different repeating patterns, or periodicities, of either 8, 16, 24, 48 or 96 nanometers. 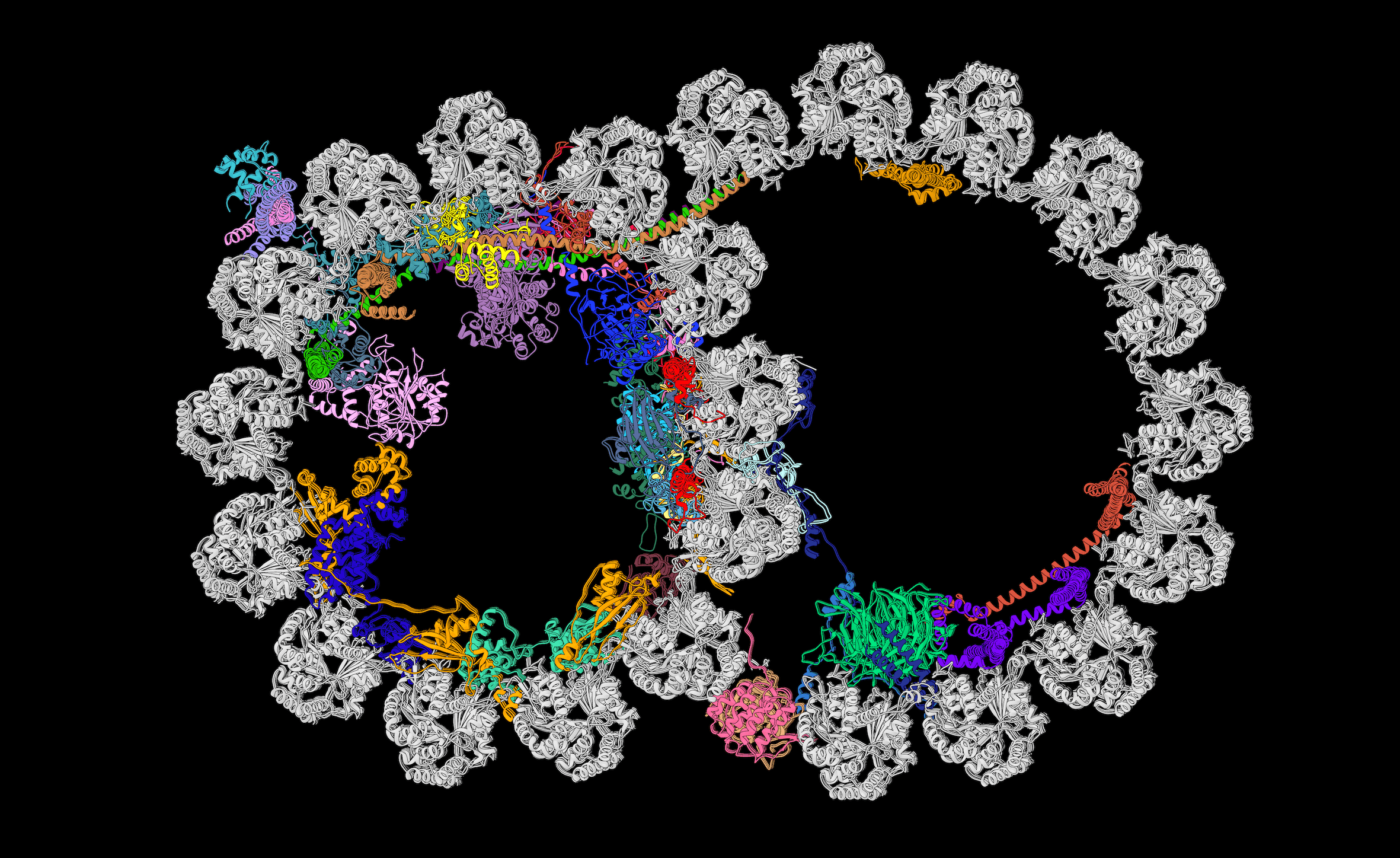 A slice through the doublet microtubule of the axoneme skeleton shows the identities, positions, and interactions of the microtubule inner proteins, each uniquely colored, reported October 2019 in *Cell*. Image credit: Courtesy A. Brown

“This is huge, but it’s still a very small part of the axoneme,” Brown says. “The next step is to try to understand how this component interacts with other components, how it bends and moves and creates motility, such as in sperm cells, and how it moves fluids around body, such as in the brain.”

Only ten years earlier, when Brown was finishing his PhD at University of Cambridge in biochemistry, no one would have contemplated trying to solve this structure. It wouldn’t crystallize, and researchers would have struggled to obtain sufficient material.

Before the recent advances in cryo-EM, a large protein or complex would have to be cut up and examined part by part. “It was frustrating,” Brown says. “You need context to understand how it all works together. You can’t just take the carburetor out and understand how a whole engine works.”

Brown grew up in England in a quiet town on the east coast called Gorleston-on-sea. His dad was a car mechanic who hated his job. As a kid, Brown became a big fan of car racing, often scheduling his weekend around races.

Brown traces his road to science back to a plastic toy microscope gifted by his parents. At 10x magnification, it wasn’t particularly good, but it was enough. “I was hooked,” he said. “I wanted to see smaller and smaller. It ultimately led to what I do now.”

He was the first in his family to go to university, earning his undergraduate degree at University of Warwick. An avid reader of books about catching serial killers, he briefly considered a career in forensic science, pursuing clues with biochemistry and DNA profiling.

Instead, he opted to solve atomic mysteries. He went to Cambridge for his PhD to start his training as an x-ray crystallographer in the lab of Tom Blundell. Brown had met his wife the first week of university, although they didn’t start dating immediately. A bioinformatics expert who worked on the cancer genome, she joined Brown in Cambridge with a position at the Sanger Institute to analyze next-generation sequencing of different cancers.

Brown stayed in Cambridge for his postdoctoral fellowship, joining the lab of Venki Ramakrishnan who had previously won a Nobel prize for work on the structure and function of ribosomes. There he and others developed new methods to use cryo-EM to its full potential.

There he helped determine the structure of the large subunit of the yeast mitochondrial ribosome. It was the first asymmetric particle to be solved to near-atomic resolution by cryo-EM and remains one of the most complex structures ever solved, Brown says. This structure heralded the beginning of the so-called “resolution revolution” in cryo-EM.

That paper changed everything for Brown—“my entire career and entire focus; what I wanted to do, what I thought I could do and what I thought was possible.” 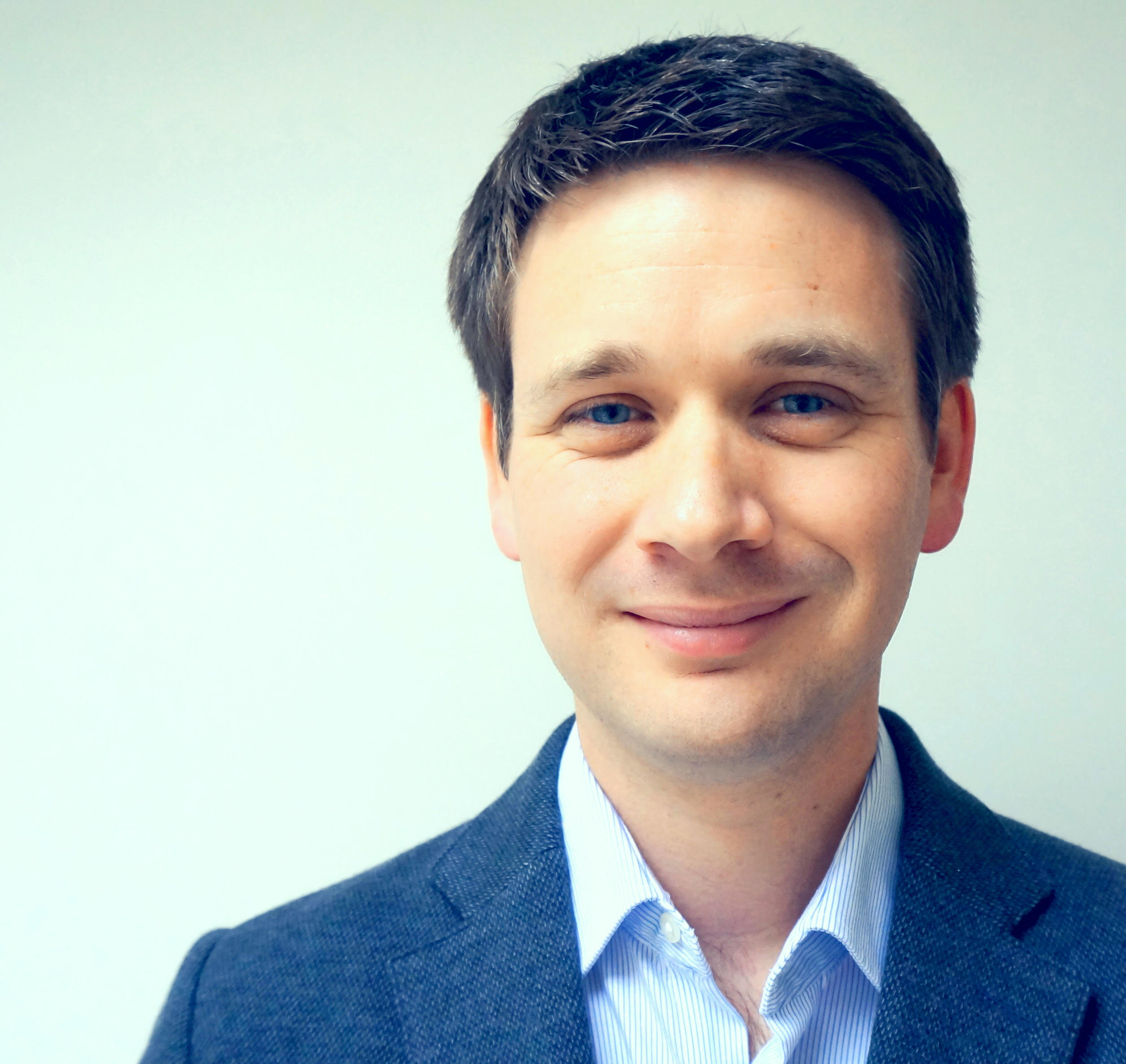 After his postdoc, Brown joined HMS, attracted by the structural biology expertise and EM facility, and set course to understand in atomic detail what cilia look like, how they function to generate motility, and how they are involved in sense perception, especially in establishing signaling pathways in sight.

“When I tell people that my lab studies cell mobility and sight, they think I lack focus, but remarkably both these things are facilitated by cilia,” Brown said.

He had read about cilia during his postdoctoral training and quickly reached the end of answers to his questions. He wanted to know more. He learned there are a cluster of rare diseases called ciliopathies with no cures and little apparent pharmaceutical interest. “There is a need for academia to come in and understand the biology and understand the diseases better,” Brown said.

One ciliopathy called Bardet-Biedl syndrome (BBS) is a genetic disease that causes blindness, obesity and kidney anomalies. In studies using bovine retina, another team in Brown’s lab recently determined the structure of the BBSome, a complex of eight proteins that regulate the transmembrane proteins in the ciliary membrane. The structure helps to understand how mutations in the BBSome can cause blindness. They reported their findings in the journal eLife in January 2020.

The two recent papers illustrate the direction and future of the Brown lab. “It’s a shame more people don’t know about cilia, because they are fascinating,” Brown says. And advances in cryo-EM in the last five years have made it possible to study them at the atomic level. Brown predicts that the next five years are going to bring bigger changes. “Cryo-tomography and machine learning are going to be huge in structural biology. The revolution hasn’t stopped yet”.