As a chemistry graduate student at Harvard University, Qing Fan made the rounds of laboratory open houses. She stopped after she saw a short talk by the late Don Wiley about how major histocompatibility complex (MHC) molecules are able to recognize and differentiate a large range of antigens. “It is a very elegant mechanism, and I was fascinated,” says Fan, assistant professor of pharmacology and pathology and cell biology at Columbia University.

She joined Wiley’s lab immediately. “Don Wiley pioneered the use of structural biology and structural methods to provide insights into biological problems,” she says. “That’s the main lesson I learned in his lab.”

In Wiley’s lab, she worked on solving an inhibitory natural killer (NK) cell receptor structure, a receptor that governs the innate immune system. NK cells are responsible for attacking and destroying invaders such as bacterial cells or viruses. When the inhibitory NK receptor detects an MHC ligand on a target cell, indicating the cell is not foreign, the NK cell responds by reducing its toxicity.

Fan solved the structure using multi-wavelength anomalous dispersion (MAD), a novel method at the time. While learning about it, she also learned about its inventor, Wayne Hendrickson, and when she went looking for a post-doctoral position, she chose to join his lab at Columbia University.

In Hendrickson’s lab, Fan decided to focus on solving the receptor that recognizes follicle stimulating hormone (FSH), a reproductive hormone. The receptor is one of a family of receptors that share the same alpha subunit, but each receptor has a unique beta subunit and recognizes distinct hormones with no cross reactions. Fan solved the structure of FSH in complex with its receptor and found something surprising. The residues in the unique beta subunit don’t solely drive the specificity of the binding. Rather, she says, “it is mediated jointly by the common alpha subunit and the hormone-specific beta subunit.”

The finding had therapeutic implications, since targeting this receptor-hormone interaction could be used for either contraceptive or fertility treatments. While Fan did not pursue this work, a pharmaceutical company did acquire the patent and has begun development of the lead. “We were more interested in the basic mechanisms,” she says.

In 2005, Fan started her own lab at Columbia, where she is applying x-ray crystallography to understand more about g-protein coupled receptors (GPCRs), a large class of receptors that recognize a wide range of ligands and tend to be drug targets. In 2014, she solved the GABAB receptor structure, which is known to be involved in inhibiting neurotransmitters and also in disorders such as epilepsy, spasticity and chronic pain. 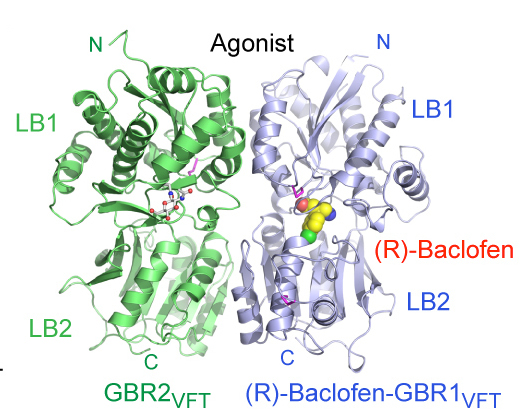 Structure of a heterodimeric complex between the extracellular domains of GBR1(GBR1VFT) and GBR2 (GBR2VFT) in the active state bound to the clinical drug (R)-baclofen.

Taking this work beyond the basic science, Fan is currently collaborating with a colleague at Columbia to screen for novel drugs that might have therapeutic potential. In addition, the structure revealed how the receptor is activated, a mechanism that at first appeared to be unique to GABAB. Fan, however, is seeing clues in her lab that suggest that it might be a more general mechanism for class C GPCRs. “The work is still in progress, but the hints we’re seeing are very exciting,” she says.