Heading a small lab of just three people at the University of Kentucky College of Pharmacy, Oleg Tsodikov, the only structural biologist at the College, is juggling multiple drug discovery projects. “It’s a small structural biology community here, but with good facilities,” says Tsodikov, Associate Professor of pharmaceutical sciences at the University of Kentucky (UK).

The project that is farthest along involves the discovery of small molecules for use in combination with drugs of last resort for extensively drug-resistant tuberculosis infections. These small molecules interrupt the pathway that confers resistance to aminoglycoside drugs such as kanamycin. To do this work, Tsodikov is collaborating with his wife, Sylvie Garneau-Tsodikova, an expert in synthetic chemistry, biochemistry, and microbiology, and with James Posey, a group leader at the Centers of Disease Control and Prevention. 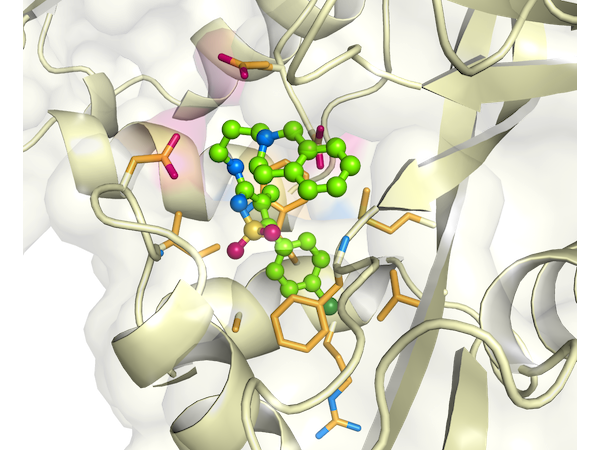 A structure of Eis, an enzyme that allows tuberculosis to resist an antibiotic of last resort, in complex with a small molecule (transparent) that inhibits its activity.

Tsodikov’s interest in human health developed when he was an undergraduate in the Soviet Union. Originally from Ukraine, he attended the Moscow Institute of Physics and Technology. Though he studied fundamental physics for the first four years, his final two years, the equivalent of a master’s degree, focused on molecular biophysics and chemical biology. “Fundamental physics seemed kind of dry to me,” he says. “So my career moved to studying biological processes and how that applies to human health.”

By the time Tsodikov graduated in 1994 from the Moscow Institute, the Iron Curtain had come down and he was able to consider graduate studies in the West. He pursued doctoral studies in biophysical chemistry at the University of Wisconsin. During these years, he and his advisor Tom Record developed Surface Racer, a program that is still supported by SBGrid. In Wisconsin, Oleg also focused on understanding the initiation of transcription of DNA into RNA in bacteria, by solution studies. “It was a black box approach where you read out numbers and inferred what was going on,” says Tsodikov. “In contrast, structural biology gives you a very direct molecular picture of how things are organized. The two approaches are highly complementary.”

To learn structural biology techniques, Tsodikov joined the lab of Tom Ellenberger at Harvard Medical School. Ellenberger was using crystallography to study DNA repair, so it was an excellent fit. Tsodikov studied a human DNA repair pathway, nucleotide excision repair, focusing on enzymes that cleave damaged DNA. During his time at Harvard, he solved the structure of a portion of this 20-protein molecular machine that acts as scissors, a protein called ERCC1 and its complexes with interacting partner proteins, XPF and XPA. Tsodikov also met his wife during his post-doc years at HMS.

In addition to his work on tuberculosis, Tsodikov also maintains two other drug discovery projects. His group is discovering inhibitors of a primase enzyme that supports the replication of chromosomal DNA during bacterial cell division. The goal is to stop cell division, but only in bacterial cells. “Humans have a primase enzyme that does the same thing but is completely different, so we think the inhibitors we’re developing will not target human cells,” he says.

The lab has also recently begun a project related to a childhood cancer called Ewing Sarcoma. His lab is applying crystallography to understand the mechanism behind mithramycin, a product of Streptomyces bacteria that interferes with an oncogenic transcription factor called EWS-FLI1 that drives the cancer. Mithramycin is a large, 1000-Da molecule that also holds promise as a potential drug for aggressive forms of prostate cancer, which is driven by a similar oncogenic transcription factor, TMPRSS2-ERG.

Though potent, the drug has unwanted toxicities. “Our goal is to figure out how mithramycin interacts with oncogenic transcription factors,” says Tsodikov. “We need that information to make more selective mithramycins that are less toxic.”