Enrico Di Cera studies proteins involved in blood coagulation. He has spent a significant portion of his career working out the function and structure of thrombin, and has recently solved the first structure of prothrombin, thrombin’s precursor in the body. 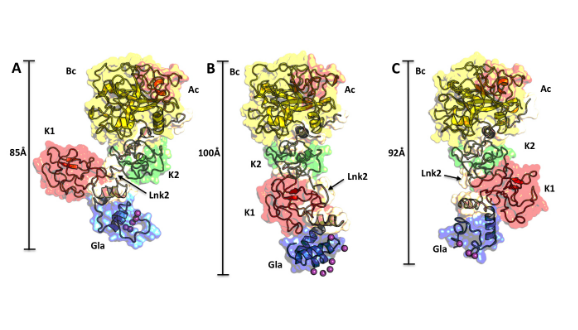 Conformational plasticity of prothrombin. The three structures are aligned over the rigid kringle-2/protease pair and then visualized separately in the same orientation. Individual domains are labeled and colored as follows: Gla domain (Gla, blue), kringle-1 (K1, red), kringle-2 (K2, green), A chain (Ac, orange), B chain (Bc, yellow). The flexibility of Lnk2 causes the Gla domain/kringle-1 pair to move up to 40 Å (B vs A) or to rotate 180° (C vs A) relative to the rigid kringle-2/protease domain pair.

But Di Cera wants one thing to be clear: He is not a structural biologist.

Over the years he’s learned that structure is necessary in his work, but it isn’t sufficient. “Our approach is and has always been rooted on the rigor of the theory of ligand binding and linkage,” says Di Cera, Chairman of the department of biochemistry and molecular biology at Saint Louis University. “The rest of the things we do complement that main approach.”

Growing up in Italy, Di Cera wanted to be a physicist. But to make his father happy, he attended medical school at the Catholic University in Rome. But what interested him more were biophysics and allosteric proteins. “My dad always felt betrayed,” he says.

In 1986, after completing medical school, he lucked into a four-month post-doc at the University of Colorado in Boulder. Working with chemist Stan Gill and biophysicist Jeffries Wyman, he got involved in the study of hemoglobin allostery and linkage thermodynamics. Gill extended Di Cera’s funding, so he stayed until he had to return to Italy for the mandatory military draft in 1988.

A year later, Gary Ackers recruited Di Cera to the department of biochemistry at Washington University in St. Louis. To avoid overlap with Ackers, an expert on hemoglobin, Di Cera began his work on thrombin, having developed an interest in blood coagulation in medical school. Around that time, Wolfram Bode at the Max Planck Institute of Biochemistry had just solved the structure of thrombin.

Soon after, Di Cera uncovered an intriguing allosteric effect of positive sodium ions on thrombin causing a sharp increase in catalytic activity. But according to Bode, there was no sodium bound in the structure. As a result, the field dismissed the effect.

But Di Cera’s lab continued its investigation. They discovered that sodium binding changed the specificity of thrombin toward physiological substrates. “The relevance of the sodium effect was no longer in question,” says Di Cera.

In 1995, collaborative work with Alexander Tulinsky at Michigan State University led to the identification of the sodium site of thrombin, one of the first sodium ion sites reported in the PDB. “It was sitting right next to the primary specificity pocket,” says Di Cera. “It was the simplest structure-function link you could think of.”

While the structural biology had persuasive power, the pace of collaborations to achieve results was too slow for Di Cera. So he combined his lab’s existing expertise in enzymology, mutagenesis and ligand binding theory with new expertise in structural biology. “When something becomes important to your research, you need to do it in your lab,” he says. “My lab has become a great place to train and do research.”

In 2010, Di Cera moved his lab to Saint Louis University, where work on thrombin continues. Using knowledge from the sodium effect, his team has engineered thrombin to function as an anticoagulant. The compound is now in pre-clinical development.

Work on prothrombin started in 2012. The team has already solved the first structure and revealed its conformation plasticity and mechanism of activation. While Di Cera’s investment in structural biology has paid off, he remains rooted in the formal training he received early on from Gill and Wyman in biochemistry. “Pretty pictures make you feel good,” he says. “Solid biochemistry makes you feel right.”