Three weeks after most research on campus was paused in the first wave of the U.S. coronavirus pandemic, Yuh Min Chook learned that a cancer drug her group helped develop was going into a small global randomized clinical trial for hospitalized patients with COVID-19.

The drug works deep inside cells, blocking transport from the nucleus to the cytoplasm. As a cancer treatment, it seems to work by blocking the exit of native cancer-fighting molecules. Locked in the nucleus, the trapped proteins and RNA can counteract many oncogenic pathways that suppress tumors, growth, and inflammation.

In COVID-19, the nucleus lock-down may disrupt viral replication, or it may weaken the deadly cytokine storm. Both possibilities were suggested by preclinical testing, according to a company news release. The mechanism is unclear. “We don’t understand how that connects at the molecular level,” says Chook, a structural biologist at University of Texas Southwestern Medical Center. “Someone in my lab should do this work.”

Her lab probably could get permission to do the work. After all, the only exceptions to the scientific shutdown on her campus and others around the world are critical lab maintenance and research directly related to COVID-19.

Chook pondered details of how to approach such a study in an extraordinary time. “We can expect multiple rounds of working from home,” she says. “Even when we’re allowed to go back, we will have to go back in stages. We will have to social distance, and people will work in shifts.”

But figuring out the finer points of how things can get in and out of restricted places is a Chook lab specialty. The group studies transporters that move big molecules back and forth between the nucleus and cytoplasm.

Inside cells, a double membrane separates the nucleus from the rest of the cell. The two membranes are punctured by giant channels that allow molecular traffic to come and go between the nucleus and cytoplasm. The tunnels (constructed of nuclear pore complexes) are like the Channel Tunnel that connects England and France, because the big molecules, like cars, cannot drive through on their own. They must be loaded onto a shuttle train.

The drug in the COVID-19 trial blocks one of the most frequently used outgoing shuttles, a transporter variously called CRM1, Exportin1, and Xpo1. In people, CRM1 belongs to a family of 20 different karyopherins, also known as kaps, importins and exportins. The numbers of names for each may be testament to how crucial they are to a wide range of activities—gene expression, signal transduction, immune response, oncogenesis and viral propagation—all dependent on kap shuttles to keep the molecular traffic moving. The Chook lab studies physical and cellular mechanisms of Kaps, also known as Importins or Exportins, that transport macromolecules in and out of the nucleus.

“CRM1 is a general nuclear exporter,” Chook says. “It recognizes hundreds to a thousand of proteins and a couple thousand RNA on top of that.” CRM1 controls many cellular processes—cell cycle, cell proliferation, surveillance. But it doesn’t bind everything. The cargo it carries must have a particular signal recognized by the transporter, and that signal must be found in every single protein that it binds directly. In other words, the cargo must have a ticket to ride.

“My lab is studying how CRM1 recognizes the signal, which has a different sequence in different cargos,” Chook says. “What allows it to be specific but constrained to several thousand things? Structural biology helps understand how diverse-looking signals can actually bind very well to the same transporter. In looking at how it binds to cargos, we can also understand how it binds to inhibitors and to potential drugs.”

In 2009, the Chook team was the first to solve a structure of CRM1 bound to the signaling section of its normal human cargo (Nature, 2009). The publication coincided with a new search for a small inhibitor by the Massachusetts-based Karyopharm Therapeutics. 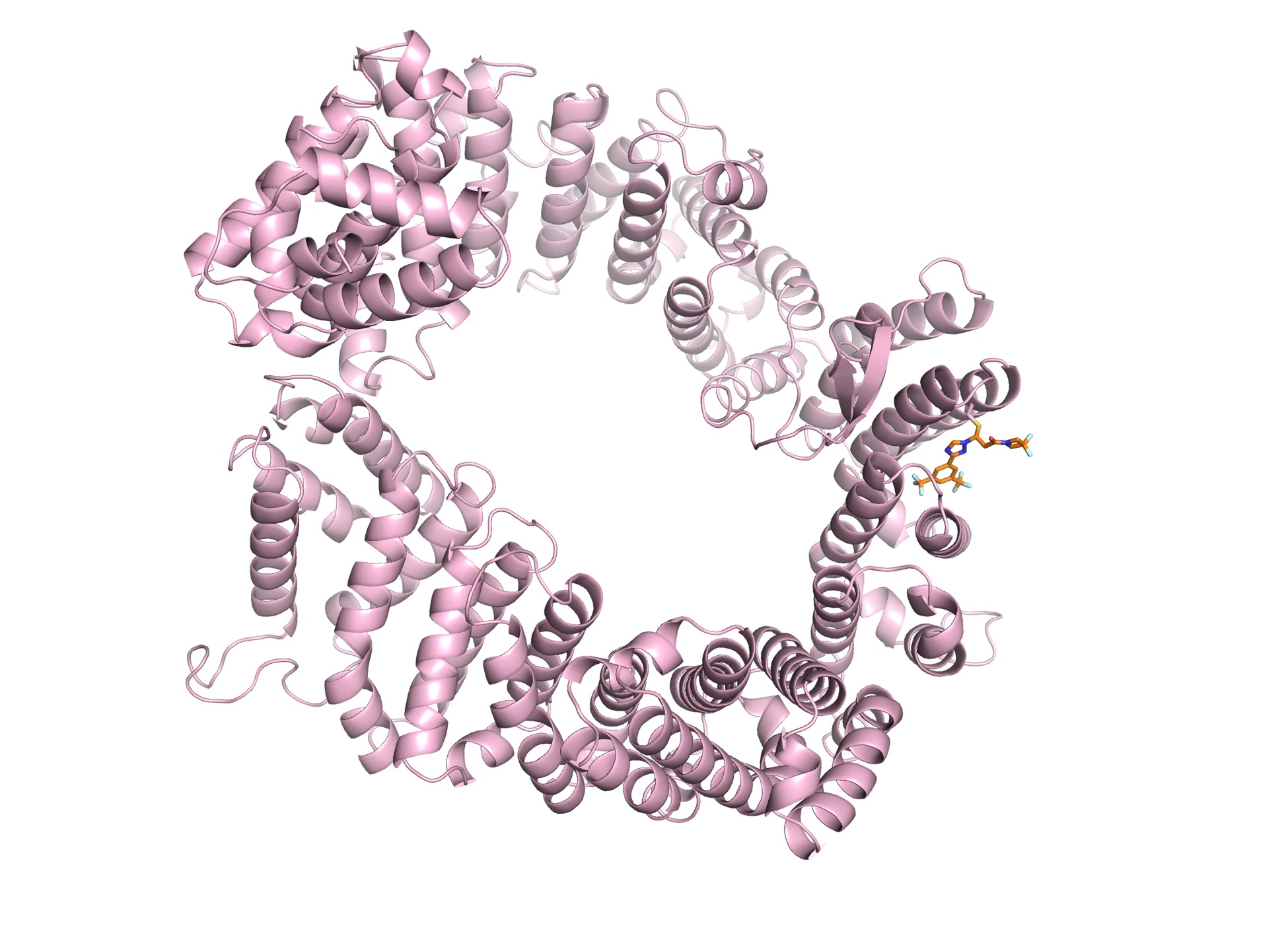 The ring-shaped CRM1 is bound to an analog of Selinexor, a drug that is approved for multiple myeloma that will be tested against COVID-19.

“From our structure, it was clear that the site that binds the cargo proteins also is the site that their inhibitor targets,” says Chook. The group began a collaboration with the company and produced five papers examining how candidate compounds target and bind to CRM1. The structural details also helped explain why the company’s new drug, Selinexor, is tolerated in patients and why another type of experimental CRM1 inhibitor, Leptomycin B, was so toxic in early stage clinical trials years earlier, she says. Last summer, the new drug was approved for refractive and resistant multiple myeloma.

The lab will continue to work its way through the kap family when the science can start up again. In the meantime, many lab members are taking deep dives into the scientific literature. “Most of time, students and postdocs are too busy doing,” Chook says. “Many don’t spend the time reading as they should. Now, there is time for them to do that and write review papers. It’s really structured, and they each have a goal.”

Reading is an activity close to Chook’s heart. She grew up in a small town in Malaysia. In the 8th grade, she once got in trouble for reading a novel hidden on her lap during a boring class. Admonished by her parents to apply herself to school, she turned her attention to geography and soon to the full repertoire of high school science—biology, chemistry and physics.

“I completely fell in love with biology,” she says. “I felt like it explained the world to me. Somehow, things made sense. I was so in love with biology that my friends in high school were a little taken aback.” So were her parents, even though they were elementary school teachers. The culture around her looked askance at deep pursuits of knowledge.

Chook had a vague notion about being a doctor or a scientist, but it didn’t seem possible in Malaysia at the time. She wrote to the embassies of several Western countries for information and soon narrowed down her choices to schools in the United States and the UK. The Dartmouth representative suggested Bryn Mawr would be perfect for her, and Bryn Mawr gave her a full scholarship. It was a bookish place, where she finally felt like she fit in. "Everyone around you was passionate about something they were studying,” she says. “It was very scholarly.” Most students went on to graduate or professional studies.

Chook majored in chemistry at Bryn Mawr and in biology at Haverford, a nearby partner college. There, she discovered a new way of studying science. “We had a textbook, but the professor rarely referred to it,” she says. “Everything we learned was experimental evidence that led to knowledge. We had to write up each project as a paper. Imagine doing this as an undergraduate.” By the end of her junior year, thanks in part to an enthusiastic biochemistry professor and a summer lab fellowship, she became captivated by proteins and their structures.

She earned her doctorate at Harvard University in the lab of William Lipscomb, a Nobel laureate in chemistry. She explored signal transduction in a postdoctoral fellowship at Mt. Sinai Hospital in Toronto, but soon realized it was not for her. “The field had matured,” she says. “There was too much information to catch up on.”

In search of newer field with more questions than answers, she landed in the lab of Günter Blobel at Rockefeller. In 1999, Blobel won a Nobel Prize for his work on signaling through another cellular organelle membrane. The same year, Chook also had a milestone—she solved the first structure of a kap variously named Kapbeta2 and Transportin1. 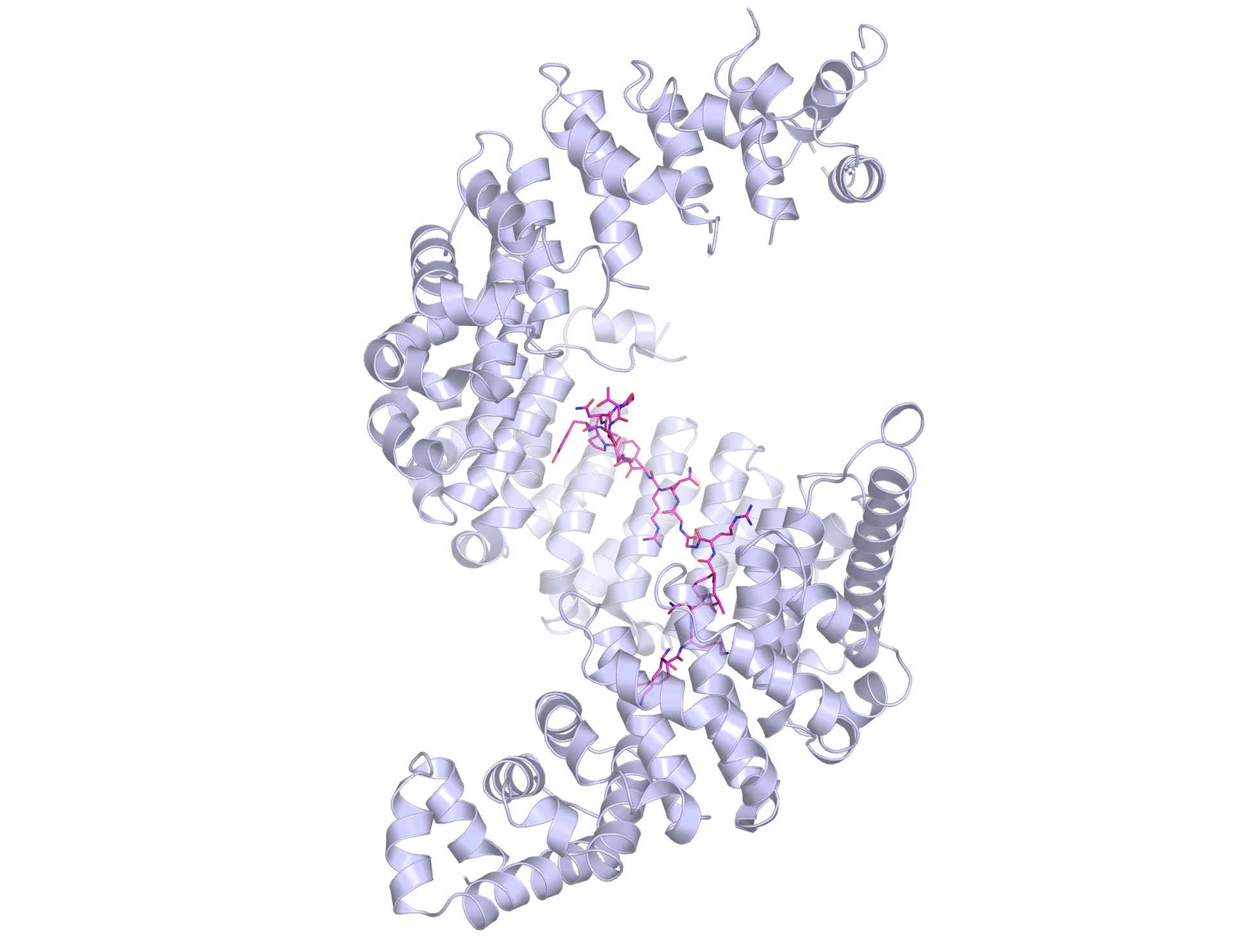 Kap-beta2 (also known as Transportin-1) shows off its spiral structure, bound to a PY-NLS peptide (in magenta).

“When I first got a glimpse of this structure, I was flabbergasted,” she says. “the protein was so unusually shaped. It was a spiral, a solenoid. Really funky. It gives the protein huge amounts of surface to bind various things. Having a spiral shape allows it to wrap around cargo, and it can have different depths to adapt and bind different cargoes. When it takes different proteins from one place to another, it first has to bind and then when it takes it through, it has to release. The spiral shape allows different chemistries. Kaps are cool.”

In 2001, Chook started her own lab at UT Southwestern. There, her team figured out how beta2 recognizes a signal from one cargo protein, a physical and chemical formula of structure and sequence that illuminated kap mechanisms more broadly.

Chook first avoided CRM1, because other labs had been pursuing the structure. Then came a determined postdoctoral fellow. “How can you say to a trainee that you can’t do the most important work?” Chook says. “I was worried because we were six years late, but I said let’s try.” Four years later, the postdoc had succeeded in growing crystals, but she left the lab for another job. Another postdoc took it over and solved the structure two years later.

The disease connections have been unexpected but satisfying. For example, other researchers showed how protein mutations associated with familial amyotrophic lateral sclerosis (ALS), or Lou Gehrig’s disease, blocks its transport into the nucleus by beta2 and sets off a cascade of events that ends up killing motor neurons.

In 2018, the Chook lab published a paper with the lab of her husband, Michael Rosen, about the same mutated protein. The karyopherin beta2 controls whether the protein bunches up in condensates or disperses. The collaboration had its roots in five summers the family spent getting back to bench science in Woods Hole, Massachusetts.

When the lab is in full swing, one of Chook’s favorite distractions from reviewing papers and writing grants is reading food blogs. Her colleagues consult her on restaurant recommendations, and at home the kitchen allows her to work with her hands, especially during a pandemic lockdown.