Jennifer Doudna has reached celebrity status as one the inventors of the CRISPR/Cas9 genome editing technology. The tools, the equivalent of a toolkit for performing precision surgery on the DNA of any organism, have revolutionized research in the biological sciences and could do the same for medicine in the near future. It is work related to CRISPR that intrigues her most right now, but not so much in terms of directly advancing the tools. Rather, Doudna is — and has always been — interested in the fundamentals.

“Fundamental research is critical for everything we do,” says Doudna. “To me, the whole CRISPR field and the work we’ve done in it came about through a curiosity-driven research project. It would have been impossible to do had we been focused on trying to cure a disease.”

As an example, her lab recently pursued basic questions about the workings of the enzyme Cas9, which is responsible for cutting DNA during the genome editing process. They have found that Cas9 not only cleaves DNA, it twists it into a position ideal for slicing. This finding about the basic function of Cas9 as an unwind-ase could be employed to control genome edits, says Doudna, who recently published the results in Science. 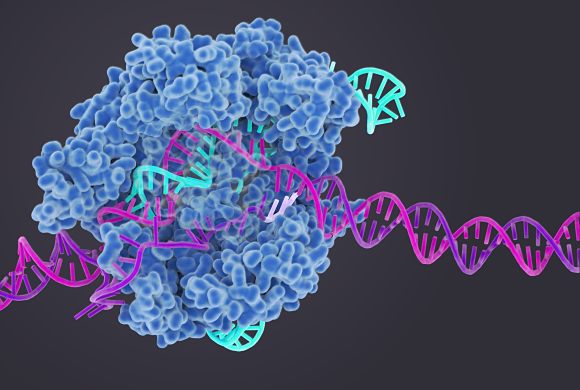 Doudna's latest structure, published in January 2016 edition Science, shows that the Cas9 enzyme in the CRISRP pathway is a DNA unwind-ase; it unwinds the DNA prior to cleavage it. This capability could be used to control genome editing.

Doudna’s approach to science has roots that can be traced back to Hawaii, where she grew up in an island environment of exotic plants and animals, such as blind spiders and bufo toads. She also happened to have an inspiring high school chemistry teacher named Miss Wong, who taught her that science was a means for solving puzzles, like why the spiders were blind. “Miss Wong was big,“ says Doudna. “She showed me that science is about answering questions, not memorizing facts.”

In 1985, after attending Pomona College, Doudna studied biochemistry at Harvard University working in the lab of Nobel Prize winner Jack Szostak. Szostak was pursuing the idea that life might have originated from the self-replicating nucleic acids that make up RNA. “I found it really compelling to think about trying to answer a really big question — Where did life come from? — with experiments in the laboratory,” she says.

With Szostak, Doudna studied self-cleaving RNA molecules, specifically the Tetrahymena thermophila group I intron ribozyme. But to really understand them, Doudna realized that she needed to understand their structure. So she moved in 1991 to the University of Colorado, Boulder to complete a post-doc with Thomas Cech, where she worked on crystallizing RNA. Cech won a Nobel in 1989 for his work discovering the enzymatic properties of RNA.

At that time, with the realization that RNA had enzymatic capabilities, people suspected that RNA molecules must form 3D structures. But only transfer RNA, the specialized RNA used during protein synthesis, had been visualized using x-ray crystallography. “The lore,” says Doudna, “was that RNA molecules really didn’t have any defined structures and that they couldn’t be crystallized.”

Doudna proved that wrong on both counts. She set up her own lab at Yale in 1994, where she completed her work crystallizing a domain of the self-splicing intron, called P4-P6, and then solving its structure with crystallography. To solve the structure, Doudna drew on her chemistry expertise and also on the work of a graduate student in her lab, Jamie Cate, who is now her spouse. Cate and Doudna soaked the RNA crystals in a chemical called osmium hexammine to provide a way to solve the phase problem for RNA. “I’ve always considered myself to be a biochemist at heart,” she says.

In 2002, Doudna moved her laboratory to the University of California at Berkeley, where she is Professor of Chemistry and Molecular and Cell Biology. Around that time, the RNA field had reached a pinnacle, so Doudna pivoted to focus on RNA-protein interactions and the function of RNA molecules in cell biology. She studied RNA structures in viruses that control gene translation, called internal ribosome entry sites (IRESs) and also investigated RNA interference. “That was really a fun way to expand our thinking about RNA structural biology in the world of proteins,” she says.

The work on RNA interference, it turns out, also got her into the CRISPR field. Today, one of the most exciting projects in Doudna’s lab involves working on the delivery of the toolkit’s molecules into different tissues. “For me, that’s the real bottleneck for applications of this technology,” she says. “It’s also a problem that relies on a lot of chemistry.”

Doudna is also collaborating with geobiologist Jillian Banfield at Berkeley who is mining the genomes of all sorts of bacterial communities to find new leads on pathways that, like CRISPR, might be part of the bacterial defense system and might also have interesting applications. “I think there’s still a lot we don’t appreciate about the way bacteria interact with their environments,” she says.

The work puts into practice the advice Doudna tells her students. “The most important thing to figure out is what excites you,” she says. “If you find your true passion and go after it with the greatest scholarly effort and integrity, great things will follow.”