When Georgios Skiniotis arrived at the University of Michigan Life Sciences Institute in 2008, his first task as a new professor was to build a cryo-electron microscopy lab. Since then, he’s made good use of it. His work has contributed to Nobel Prize-winning research, and in his own lab, he uncovered the inner workings of polyketide synthases, natural enzymes that act as factories to assemble complex chemicals that have antibiotic and anticancer properties. “We’re planning on using this knowledge to redesign these machines to create new novel molecules that might have pharmaceutical applications,” says Skiniotis, an associate professor of biological chemistry. 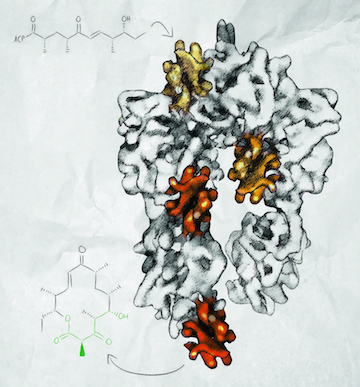 A graphic illustration of the PikAIII polyketide synthase module showing the
acyl Lcarrier protein in different positions as determined by cryo-EM.

Both projects were daunting, at first. Skiniotis, however, is not one to shrink from a challenge. Rather, throughout his career, he has been on the leading edge of using cryo-EM to solve difficult problems. “I always try to find myself something to become obsessed with,” he says.

Skiniotis first learned about cryo-EM as an undergraduate at the University of Leeds. The attraction was immediate. “I like pictures,” he says. “Cryo-EM is pretty much the only technique that allows you to directly visualize macromolecules. I like trying to put all these individual snapshots together to tell a story.”

As a graduate student at the European Molecular Biology Lab in Heidelberg he used cryo-EM to study kinesin motors, capturing snapshots that show how kinesin “walks” along a microtubule. Later, as a postdoc in the lab of Tom Walz at Harvard Medical School, Skiniotis learned single particle EM analysis and applied the technique to study transmembrane cytokine receptor assemblies in collaboration with the lab of Chris Garcia at Stanford.

He continued his cryo-EM work when he started his own lab. Upon arrival in Michigan, he bought three microscopes and transformed an empty space into a modern cryo-EM suite. “We set it up from scratch based on what I knew worked for me during my training,” he says. A fourth state-of-the-art electron microscope was added late last year to facilitate high-resolution work.

Two avenues of research dominate the Skiniotis laboratory today. One began when University of Michigan biochemist Roger Sunahara and Stanford researcher Brian Kobilka asked Skiniotis to help characterize the structure of an activated G protein coupled receptor (GPCR) bound to a G protein trimer, a central signaling complex involved in all aspects of human physiology. The complex is small, just 130 kilodaltons. “Way too small for EM,” says Skiniotis. “When they initially approached me, I told them they were nuts.”

But Skiniotis joined the effort anyway. He applied single-particle negative-stain EM to obtain the first low-resolution structures of a GPCR/G protein complex in different conformations and to help identify the conditions that eventually led to the X-ray structure determination of the complex. More recently, Skiniotis collaborated with Duke researcher Robert Lefkowitz to characterize the architecture of a GPCR in complex with arrestin, the protein that halts GPCR signaling. Lefkowitz and Kobilka won the Nobel Prize in Chemistry in 2012 for their GPCR research.

Skiniotis is now building on this work to apply cryo-EM for a more detailed structural characterization of GPCR complexes. “It is challenging due to their small size and asymmetric nature,” says Skiniotis. “But I have grown to be more daring.”

The other focus of his lab involves understanding, and ultimately modifying, the molecular factories within microorganisms that make polyketides and other chemicals with high medicinal value. In 2014, in collaboration with Life Sciences Institute colleagues Janet Smith and David Sherman, Skiniotis published two Nature papers that describe his use of cryo-EM to reveal the structure of a modular polyketide synthase (PKS). He captured snapshots of the machine in action, recapitulating a full enzymatic cycle. “The structures make a full molecular movie of how a substrate is taken up by the system and moved through it,” he says.

As a next step, Skiniotis is working to obtain higher resolution cryo-EM structures of polyketide synthases. He is also expanding the investigation to include additional, more complex PKSs in an effort to understand the general principles of these molecular factories. The ultimate goal is to create a system that can efficiently process unnatural substrates and, potentially, create novel drugs.